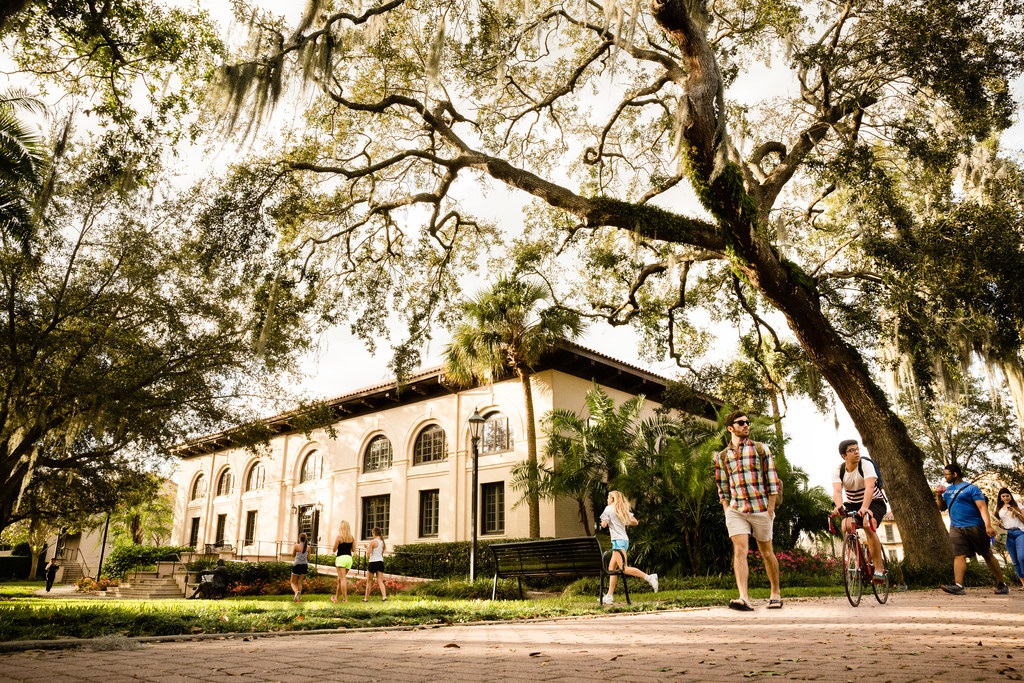 Rollins is a Business, Not a School

Amy Zdon ‘14  believes that Rollins is drifting away from its academic roots and becoming a profit-making machine instead of an educational institution.

George Cornell blessed Rollins College with one of the largest personal donations in the history of U.S. higher education. From such money, many boons of collegiate academia at Rollins, such as the Winter Park Institute and  CFAM, have been established.  Plenty of Rollins’ longstanding faculty also believe that the $105.5 million given in total has been the safety net of Rollins throughout its history of trials and tribulations in economic stability. What about Rollins College, beyond the precedent of attracting wealthy students, led an alumnus to make a generous donation of such distinction? The late George and his Rollins classmate wife Harriet most likely valued the continued success of their Alma Mater because of how deeply their lives were enriched by their time here.  In fact, most of Cornell’s philanthropy was focused on arts, education, and quality of life.

Is academia at Rollins today still characterized by the same aspects of former president Hamilton Holt’s legacy that the Cornells deemed worthy of millions in support?  Perhaps the Cornells would not even believe it appropriate to equate a sheer monetary amount with the sentiment behind their donation. The Holt presidency did, of course, create an environment on campus that fostered quality education for education’s sake. Empty profits were not a main object in Holt’s determination to assist Rollins in becoming a progressive democratic educational community.

Once he had succeeded in his mission, students benefited from “the intellectual ferment that engulfed the campus during the early thirties.”   The academia revered by the Cornells was characterized, in Holt’s words, as follows: “the individual student’s growth and development are the all important things, and that to justify itself, every course, by its subject matter and manner of being taught, must deepen and broaden the student’s understanding of life and enable him to adjust himself more quickly and more effectively to the world in which he lives.”

Is academia at Rollins today characterized by the same aspects of the Holt legacy?

What does this mean for current students?  “Client-centered” seems to mean we get what we want, right?  Like: “the customer is always right.” Like: the professors who enrich our lives the most, whom we most love, whom we give the most glowing teacher evaluations and award the student awards, must be respected by the president and consulted on matters that effect the Rollins community. Like: the C-Store employees who cheerfully listen to us as we demand ridiculously specific sandwiches and then practice our Spanish with us while we wait for our lunch should be earning more than one dollar a day above the poverty line and given the right to unionize. Like: Rollins will do its best to ensure that female clients (students) who come to this campus to enrich their lives with liberal arts higher education will be protected from the danger of being sexually assaulted at a statistical rate of one in four, etc.

But no, that is not what it means to be “client” centered.  Being “client-centered” refers to initiatives such as instituting the trendiest new majors, such as the three similarly intellectually-confined business majors Rollins markets as making it “number one in the south,” to reel in the highest numbers of admissions in an attempt to increase profit.  Perhaps the false pretenses of the admissions advertising initiatives are partially to blame for Rollins’ low retention rate.  Therein lies a major difference between “students” and “clients.” Educators inspire students; businesses make money off of clients.  Would the Rollins of today have been able to retain George and Harriet Cornell?

Being “progressive” is another characteristic that, on the surface, may let it seem like Rollins has continued the Holt legacy. Yes, Rollins has continued the once progressive tradition of close student-teacher relationships that function on an equal level of respect. But being “progressive” is a characteristic relative to the era. Rita Bornstein, the predecessor of President Duncan, acted progressively for her era when she recalibrated faculty wages to meet a new standard of social consciousness. Just as Holt had worked with his faculty to develop a more progressive curricula, Bornstein collaborated with her Arts and Sciences faculty to develop a system of equality, transparency, and democracy in salary distribution. For example, Bornstein was in favor of the “living wage” standard that requires salaries to at least support the price of living.

When Bornstein left office, unfortunately, transparency and egalitarianism in Rollins’ budget left with her. Rollins has since, without consensus from the faculty, regressed to a “market pay” system.  A “market pay” system is one that pays professors differently based on the “market value,” or external employability, of their expertise. Professors are managed like commodities, being traded by the standards of the nation’s free market rather than by the standards of merit as an educator. The theory behind such a method of salary distribution is utilitarian for two reasons.

Firstly, faculty who hold expertise that is highly profitable in employment outside of higher education will not be tempted to leave their universities for higher salaries.  Secondly, market pay helps to cut costs (especially useful in our current budget deficit) based on supply and demand principle. For example, I have been told that Rollins now pays philosophy professors 1/3 of an economics professor’s salary because the country has more philosophy PHDs than it has employment opportunities for philosophy PHDs.

But does such infrastructure encourage a setting of “intellectual ferment” at Rollins?  According to Dr. Charles Rock, one of Rollins’ economics professors, it does not. One of the reasons Rock came to work at Rollins in the first place (under Thad Seymour’s presidency) was the “esprit de corps” he felt he could enjoy with his fellow colleagues.  Rock was also attracted to the liberal arts-esque freedom he was given to teach economics from a perspective that inspired interest in civic and social ingenuity rather than a perspective that taught trainable math skills. Dr. Rock has expressed concern about how Rollins’ academia has changed since the “market pay” system was instituted. He observed that professors have begun to feel less like partners and more like replaceable cogs in competition with each other.  Now that professors are valued primarily for their resume buffers they have reacted by focusing more on private work, such as getting published, than they do on community involvement, such as giving students the office time and attention they need to learn and excel.

Theoretical debates aside, the reality is that the Bornstein method created a meritocracy within the faculty at Rollins that attracted the professors students want. Bornstein’s method did not attract professors who were interested more about money than about education.  Many currently higher paid faculty, such as Rock, do not appreciate the pay raise at the cost of job quality loss. The typically student-appreciated professors who view teaching as an end in itself rather than a means to a paycheck are overwhelmingly more attracted to Rollins’ previous egalitarian, collaborative, and transparent system of salary disbursement.    Just like “client-centered” focus does not mean the customer is always right, “client-centered” focus does not mean the students experience the education they most desire.

How does Dr. Rock see the rejection of liberal arts values and regression to dialectical standards of empty business jargon affecting the quality of life for the average Rollins graduate?  Although it was not the case in either the Holt or Bornstein eras, Rollins is now graduating some students without a basic cognizance of skills applicable to all types of life after graduation.  Many students graduate without basic writing skills that could easily be attained in the TJ’s writing center. Many graduates will go on to become the only shlub in the office who cannot understand the technology behind the product he is selling.  Some graduates will not understand the biology, physics, or chemistry of the world they live in.

Of course, these types of college graduates can still make money in their respective fields.  But, in a nation of resource excess, it is an unnecessary shame that higher education graduates are missing out on the savoir-faire aspect that makes liberal arts worthwhile.  It is a shame if Rollins, in its current state of intellectual resource excess, is not on a path towards a future in which its graduates will not only achieve but also intellectually transcend basic skill-gathering.

It seems that already many current Rollins students are not able to enjoy the enrichment for the brain, heart and soul that inspired George Cornell to leave the majority of his post-mortem wealth to this institution.  Not to mention there is a relatively high percentage of power-inheriting privileged students consolidated on this campus, and Rollins’ curriculum does not require the development of humanitarian consciousness for graduation, despite what the Arts and Sciences mission statement seems to guarantee.