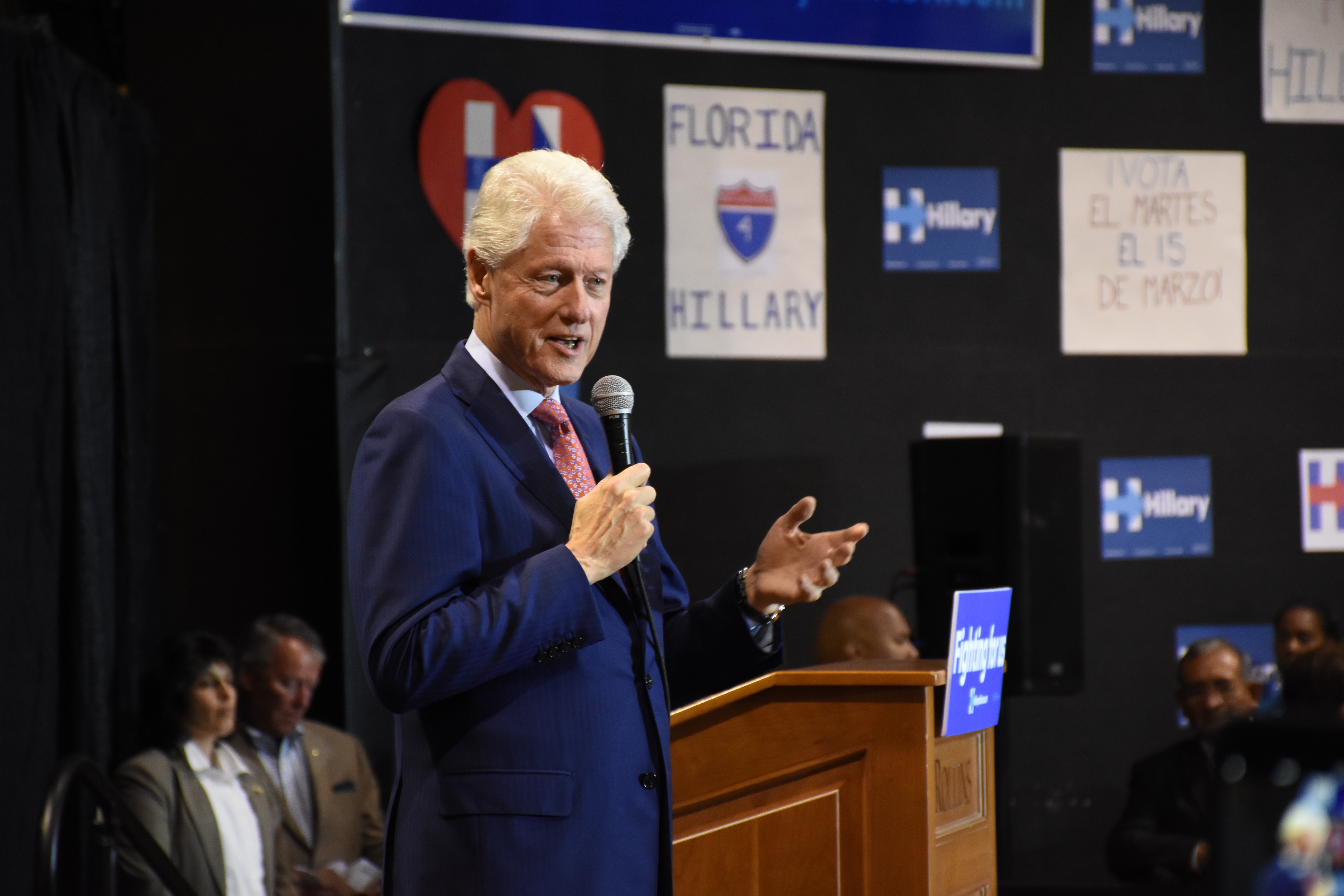 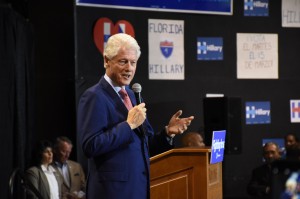 On March 14, former president, Bill Clinton visited Rollins College as part of a campaigning tour for Hillary Clinton’s presidential run. Introduced by Orlando’s Mayor, Buddy Dyer, former President Clinton took the stage in the Alfond Sports Center, hoarse from a day of campaigning.  Acoustics made the speech difficult to understand, but energy level could also have been low because many of those present had come just to see former President Clinton – rather than vote for Hillary Clinton in the Florida primary held on Tuesday, March 15.

“It was less political than I expected,” said Ly Malespina ‘18.  “I think a good portion of the people were not there to support a candidate so much as they went to see a former president, and that just doesn’t get quite the same enthusiasm out of people.”

Despite the low energy, the rally gathered a large crowd. A major theme of the event seemed to be a change towards “love, not hate.”

“Even more important than her experience and that she’ll be the first woman president, what matters to you is who will bring more positive change to more Americans more quickly,” Clinton said. “I thought so 45 years earlier when I first met her, and I thought so last night: she is the best changemaker.”

President Clinton stressed his wife’s experience, “She has stood up for children’s initiative, women’s rights, and civil rights her whole life.”

He discussed her plans for community reinvestment and the importance of youth voters. An important part of her plans for the country is to offer students more college aid.

“Her plan for college aid also includes a huge amount of money to hire, educate, and place young people,” Clinton said. “We need a serious commitment to make college affordable for everybody.”

He also outlined Hillary’s plan to restructure the economy to provide more jobs and higher wages in the American manufacturing industry and her approach to offering second chances to ex-convicts by means of training and job placement.

“We have to have inclusive economics; we have to grow together again,” he said. “We haven’t been able to do that in a long time.”

Regardless of their party affiliation or who they planned on voting for the next day, Rollins students enjoyed the opportunity to learn more about Clinton’s campaign.

Lea Harvey ‘17 said, “[I learned] a little more about what Clinton wants to do. I think it was a good event for those who were still unsure of whom to vote for, particularly Rollins students.”

Harvey continued, “I thought that it was a great opportunity for both the Rollins and Winter Park communities to learn about the policies and goals of Hillary Clinton. I believe that many people vote for Clinton simply because they believe it to be their feminist obligation but don’t know much about her actual policies or what she plans to do. It was nice to see such a large turn out that was genuinely interested in her campaign.”

Malespina reported that though most of the information President Clinton discussed could be found on the Hillary campaign website, this event provided students with the opportunity to learn more.

“For students that might not necessarily be the most politically active, this may be a good gateway into the world of politics beyond voting and talking to friends about policy,” she said.

Some commented on the reaction of the crowd throughout the speech. There was a mix of opinions in the crowd; at one point, President Clinton asked, “Who’s going to make all this happen?” and two distinct cheers arose: one half cheered, “Hillary!” while the other half cheered, “Bernie!” 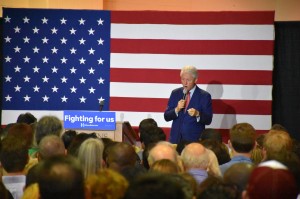 Other issues emerged throughout the speech, as Malespina noted.

“The quiet that went over the room when [President Clinton] mentioned affirmative action was nothing short of hilarious, especially in an extremely white, wealthy campus like Rollins,” she said.

As for the Republican candidates, Marco Rubio lost the primary for his home state.  Florida was Rubio’s one chance at making a comeback. However, many Floridians have lost faith with Rubio over the years because of the influence external forces have on his political choices. Meanwhile, Trump’s economic plan seems to have secured him the state’s support as he won the Florida primary.

The presidential race ahead seems to now be Clinton vs. Trump. So, who will be the next president?