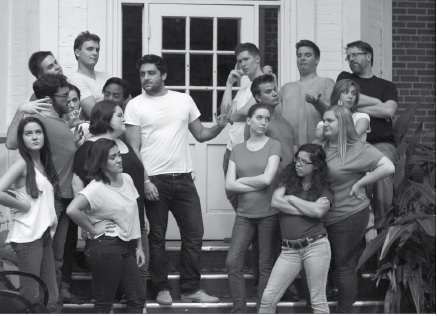 With a sold-out opening show and 18 scheduled performances this semester, the Rollins Improv Players promise to be the place to be on campus.

The Fred Stone Theater, where RIP shows are held, seats slightly more than 100 people. On Wednesday, September 10, the improv troupe had to turn away at least fifteen people from their Lucy Cross Center promoted show, “Miss Understood,” due to theatre capacity. It was a packed house that was brimming with energy and excitement. The theater was full of laughter and hoots as the troupe performed many wonderful and hilarious scenes.

“There’s just something about improve that has a way of bringing people together,” said Casey Casteel ’17. He is one of ten other students who are new to the troupe, joining the six returning members. “These performances really give us an opportunity to explore our vulnerability in ways that scripted shows just can’t,” continued Casteel ‘17.

The Rollins Improv Players have already done three shows in less than a month and plan on doing 18 total this semester. What is so intriguing and uniting about RIP is how they come up with their themes for each show: other campus groups sponsor their performance, and whatever that group is all about provides the Players with their theme of the night.

Their next shows will be on September 19 (sponsored by the Democracy Project) and September 28 (sponsored by the fraternities and sororities on campus). “We get to deal with real things, things that all students have to deal with,” concluded Casteel ‘17. “Talking about these things helped a lot of us newer members unite together and with the veterans quicker and made us more effective as a troupe.”