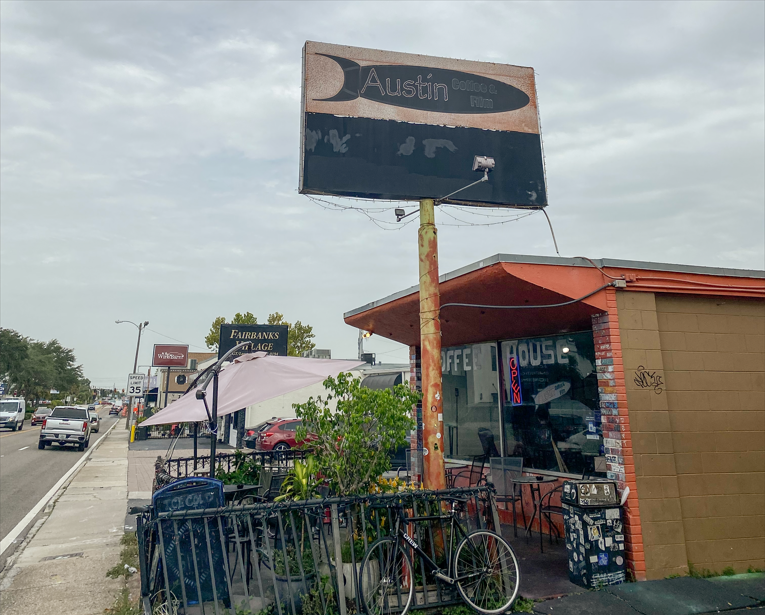 When one thinks of nightlife in the Winter Park area, minds are usually drawn to drinks at The Porch or drag shows at Southern Nights. For those craving a more bohemian experience, Austin’s Coffee and Film is a nightly destination.

However, concern for the future of Austin’s Coffee and Film has been growing over the past year since the city of Winter Park made plans to purchase the buildings from 929 to 957 W. Fairbanks Ave.

The Winter Park City Commission expressed these interests at a meeting on Feb. 24, according to the Orlando Weekly. In order to ease traffic congestion, city officials hoped to add an additional turning lane.

But many members of the community are opposed to the idea of letting go of the beloved local hangout.

Located roughly a mile from Rollins, Austin’s has been serving coffee and hosting local artists for over 18 years. The shop has formed its own community, one that Emmy Shouse (‘24) said she has felt welcomed into during her time spent there.

“I run into people from different walks of life,” Shouse said. “We’re able to offer each other different perspectives.”

When asked about the importance of keeping small businesses in Winter Park, Shouse said, “I like that they’re here. I like that I don’t have to go into Downtown Orlando or drive fifteen minutes to University Boulevard to go to a place like Austin’s.”

Shouse is not alone in her support for Austin’s. In fact, a local campaign operating under the name “Save Austin’s Coffee” has been advocating to city officials for months to prevent the sale from going through.

The group saw some success in their campaign on April 28, following a 3-2 vote by the City Commission to indefinitely table the purchase, as reported by the Orlando Weekly. However, this was not a definitive measure to protect the establishment.

For those still concerned, hope may not be lost even if the city decides to go through with the purchase. Bobby Sena (‘24), who has worked closely with city officials through the Bonner Program, said the idea that Austin’s will be shut down is a “misunderstanding.” Instead, the shop would simply move to a new location.

This may not be a perfect answer, but for many, it’s better than nothing. When asked if she thinks the location of Austin’s is essential to its culture, Shouse said that while it definitely contributes, “people would just move with it.”