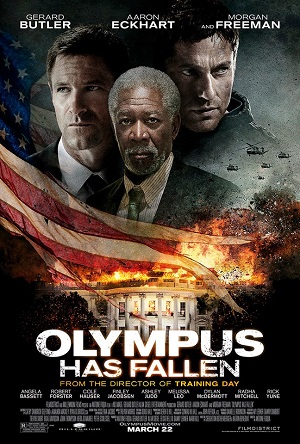 Thinking of catching a movie this weekend? Albert lets you know whether or not that
$10 movie ticket is worth it.

After the estrogen-fueled extravaganza that was Spring Breakers I needed something to balance out the old hormones – something with lots of bullets and explosions and blood. Enter Olympus Has Fallen—a decidedly masculine affair. 2013 is going to be a big year for action movies, so the question arises: will Olympus be able to bring something new to this charred and bullet-riddled table or will it soon be forgotten amid the cavalcade of mediocrity?

Directed by genre veteran Antonie Fuqua, the man behind Training Day and Shooter, Olympus tells the story of a North Korean assault on the White House in which the president is captured and forced to divulge certain classified information concerning the U.S. nuclear stockpile. Mayhem ensues and disgraced ex-secret service agent Mike Banner is the only one who can save the day. Direction is generally functional and Fuqua proves that he still has the knack for action with tight, fun-to-watch firefights and engaging visuals.

Olympus stars the world’s sweatiest man, Gerrard Butler, as the aforementioned Mike Banner who is charged to protect the president, played by Harvey Dent (Aaron Eckhart), fresh from his stint as Gotham City District Attorney. Morgan Freeman also lends his talents and vocal chords to the production as Speaker of the House Allan Trumbull.

The ﬁlm is generally well acted and I’m convinced that Butler is incapable of appearing anything other than sincere on-screen. Oddly, Freeman of all people seems strangely detached from the proceedings. I get that he’s supposedly trying to keep a level head amidst the greatest crisis in U.S. history, but I can’t help but feel that he comes across as unconcerned and kind of seems to be phoning this one in.

The thing that I find weirdly inconsistent about the whole affair is that while the action and acting are done both earnestly and, barring some of the more incredible fight scenes, relatively realistically, the plot line is just ludicrous. North Korea, after all, is a country that literally cannot feed its population. Simultaneously financing a sleeper cell operation that would have no doubt cost obscene sums of money, required decades to plan and successfully execute, and warrant a technical know-how beyond the skill of even the most ambitious C.I.A. operative just doesn’t make any sense. If, however, you’re willing to suspend your disbelief enough to pretend that maybe SPECTRE is behind the whole thing, then perhaps an immersive experience isn’t wholly out of the question.

Another point that the movie has in its favor is the absolutely brutal depiction of violence. Its gunfights don’t come off as heroic or exciting, but actually terrifying, adding a welcome sense of weight to the fate of the characters. North Korean commandos execute wounded Americans while the camera is in the prime angle to capture the brains splattering across a nearby wall. Civilians aren’t spared either as a gunship opens ﬁre on the unsuspecting crowds below, and bullet impacts seem to have a tendency to send up geysers of flesh and blood. On the other hand, blood geysers can only continue to register on an emotional level if they are used in moderation and aren’t being shoved in our face literally every five seconds. Overuse kills impact, as it does in every medium.

For all of its positive aspects, the ﬁlm really doesn’t have any memorable unique selling points. Franky, I found the whole experience kind of bland and unsatisfying, like being served a single piece of dry toast when you paid for a three course meal. I found myself trying to anticipate a plot twist that never came, like Morgan Freeman secretly being evil or the North Koreans breaking into the White House to wish the president a happy birthday. Predictability plagues the plot, and none of characters are interesting or dynamic enough to warrant anything more than a superficial engagement in the pretty lights and the explosions flashing on the wall.

Ultimately, Olympus falls victim to the sizzling brand of mediocrity. It’s a competent but wholly unremarkable little action flick that in all likelihood will, or at least should, be looked over in favor of Spring Breakers or Stoker. My guess is that it will very quickly be forgotten in the white noise of machine gun ﬁre emanating from many other interchangeable action movies coming out this year.