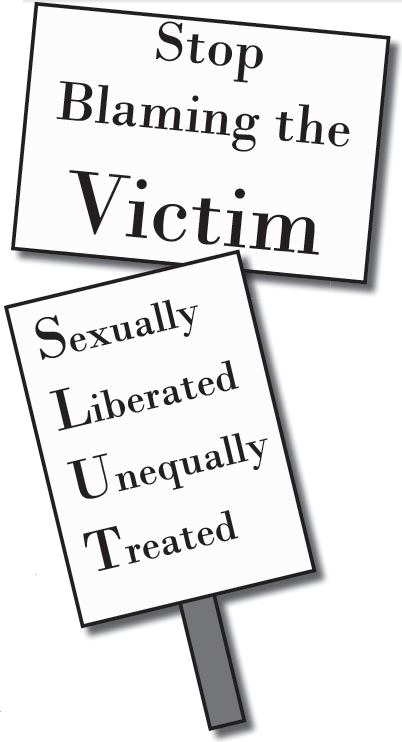 In the animal kingdom, words such as predator and prey refer to the circle of life with respect to the food chain.  The predator, the carnivorous aggressor, seeks to attack its victimized prey, then consumes the spoils of his or her hunt.  Though animal lovers may cringe when watching wolves on the Discovery channel stalk and devour unsuspecting woodland critters, we accept this as an unstoppable force of nature.  We forgive these wolves while sympathizing with their bunny meals – as this is the way of the wild: predator and prey.

Luckily for the rabbits of this world there exists such an instinct for preservation of life. Rabbits have forceful legs to lunge, eyes on the sides of their heads to permit self-surveillance, huge ears for ultrasensitive hearing, and fur that acts as camouflage to their environment.

Within the arena of human society, we have our own much less forgivable version of predator and prey that unacceptably prevails through the onslaught of rape culture.  Our predators are rapists and the prey is anyone, but primarily in the United Sates, it’s women. (91% of victims are female, while 9% are male.)

As a twenty-year-old female in areas such as downtown Orlando, I fear my lack of forceful legs, advanced peripheral vision, and paranoid listening.  I don’t have a magical invisibility cloak and I don’t easily pass as an unapproachable man.  Yet without such defense mechanisms to deploy, my heart rate rises—like the bunny sensing imminent danger—when receiving voyeuristic stares, hoots and whistles.  Since puberty, I have been given every reason to be afraid of the one in six chance I run of being raped or an attempt to be made, within the US alone.

If the statistic of one in six women shocks you, it should: rape culture is an underhanded epidemic—one that the global phenomenon, SlutWalk, seeks to combat.  Originating in Toronto, Canada as a means to teach one politically incorrect police officer the error within his limited vocabulary (for claiming that women “should avoid dressing like sluts if they don’t want to be victimized”) about 3,000 people marched in the first ever SlutWalk behind the border of our northern neighbors.  The feminist trend spread quickly as walks were held worldwide in such countries as our own, India, Australia and England.

Following the resounding success of SlutWalks held in major cities such as New York City and Chicago, our own Rebecca Wilson ’14 should be awarded praise for organizing the first ‘SlutWalk Orlando’ that took place this past Saturday, Nov. 16 near Lake Eola.

So what is the point of SlutWalk: is it simply “sluts” walking?  No.  The premise on which men and women gather in protest is against the feminist concepts of slut shaming and victim blaming.  In other words, no victim of sexual assault should be told they were “asking for it” or that any of their actions leave them at fault.  Thus such expressions as “My clothes are not my consent,” “No means NO,” and “Alcohol is not an invitation” are the asserted chants of SlutWalk participants.  In an attempt to liberate our malleable minds from the deviant persuasion of hypnotic rape culture (as perpetuated most recently by the inexplicably popularized Robin Thicke song, “Blurred Lines”), SlutWalk demands a change within our social code —one that permits women to make wardrobe choices without the potential of being deemed “a slut asking for rape.”

Skin-bearing Rollins students gathered in downtown Orlando armed with signs speaking out against sexual violence, lack of consent and persistence of the patriarchy.  There was a diverse representation of gender, age, sexuality and race as the Rollins community stood together behind its mutual cause.  The SlutWalk seeks to inform about the under-appreciated, harsh realities of non-consensual sex and how its lasting repercussions apply to us all: your sisters, mothers, daughters and friends.  I, as one of the slut-walkers, am proud to report the success of our efforts as we received horn honks, cheers, and applause of approval from tons of bystanders and inhabitants of the downtown area.

Think twice when assuming this is an attack on men—it is not.  It’s an attack on indecency, on immorality, on fear, and unequal gender dichotomy.  SlutWalk is a march of liberation that provides discourse to raise vital awareness before future generations suffer without change.  Among the pack of liberal arts students, faculty and outside participants in protest, there were no rabbits nor wolves.  There were simply civilized people.