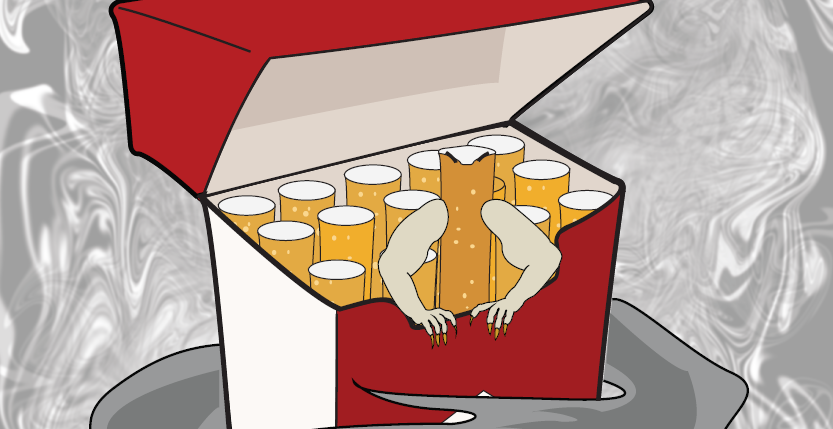 Smokers Kicked to the Curb 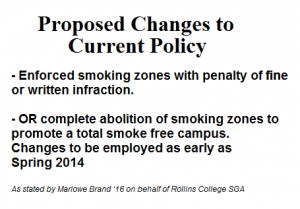 In May of this past year I decided to fully embrace the notoriously unoptimistic challenge of cigarette smoking cessation. While I have had my own battles and moments-of-truth to face, I have ultimately been successful with few slip-ups to report. However, the majority of these “slip-ups” can be acquitted to my own embedment within smoker culture; I have friends who smoke and whom I have always smoked with. When they are lighting up while continuing down the path that I had made a life style of for five long years (long in the sense that I could hardly remember a time before I became a smoker), I feel a certain sense of loss – in camaraderie, mutual appreciation and gratification.

A conscious effort to drastically alter an acquired, comfortable lifestyle is not a simply won skirmish. In fact, it’s a continuous daily effort. It is upon the basis of that mentality that I pose the question: is Rollins’ recently implemented policy concerning designated smoking areas aiding those wishing not to partake in smoker culture? Or is it overly inconveniencing those accustomed to their habits, privilege, and – essentially – liberty?

While I do not identify amongst the non-smoking population, I consider myself to be a part of a smaller limbo-like group of recovering smokers. I say this because the urge lingers (without nicotine supplements my mood is rather intolerable) and I sympathize with an affective change the new policy has brought upon most of my still smoking friends, many of whom do not recognize the designated smoking zones as the legitimate sole places to smoke on campus. Without any real repercussions to come from lighting up on the way to class, a lot of students do not feel inclined to march out of their way in order to smoke a cigarette – if only to make them late to their next class.

I can understand the degree to which smokers are inconvenienced by the delegation of specific smoke zones. Last year when I was still smoking, I didn’t pay much attention to the new policy myself. Having been at Rollins for three semesters where I was allowed to smoke at a whim, the new rules more than slightly irked me. For fear of the trouble I could get myself into I did originally try to abide by that latest law of the land while I smoked my cigarettes in huts and small plots of chairs or benches. But I immediately noticed a way in which my unhealthy habit was being put on display, not so unlike the caged beast at a zoo. Passersby would glance, take note I suspected, then walk on past. It added a whole new level of guilt to my habit, which was one I had already not been proud of – smokers are typically people self-medicating high levels of stress with nicotine consumption and tobacco usage. Adding new stress to that equation only drips oil on the flame (from which they light up their cigarettes.)

I totally feel like the smoking policy is very anti-democratic. I also feel like I’m being segregated from the rest of the non-smoking student body and that’s just not fair. -Kayla Salyer, Class of ‘17

To that end, it is this feeling that smoking is naughty or a punishable offense that leaves smokers feeling wounded by the new policy. Try to think of it from their perspective: an entire project and campus development was put underway so as to remove their “taint” from the general population. It’s hurtful to be shamed, then put on display for it. While I can also understand that a non-smoker does not necessarily want to be forced to endure a smoker’s habits, a cigarette smoking friend of mine, Faith Zimmel, lends the idea that they can get out of her way then – pointing out the double standard between shifting smokers from where they smoke while not expecting non-smokers to do something similar. Because there are fewer smokers than non-smokers on campus, the new policy could be viewed as a means of segregating a minority when considering the perspective of that smaller group.

As far as I can tell, there are many differing opinions out there concerning these changes to on-campus conduct without a real general consensus. For now the policy remains that smokers must smoke in their designated areas and non-smokers can then breathe easy. But it’s up to you to formulate your own opinion about the rights and feelings of your cigarette indulging peers: should Rollins College be a smoke-free campus?

Artwork Designed by Will Hauver, ‘15

The opinions on this page do not necessarily refl ect those of The Sandspur, its staff or Rollins College.