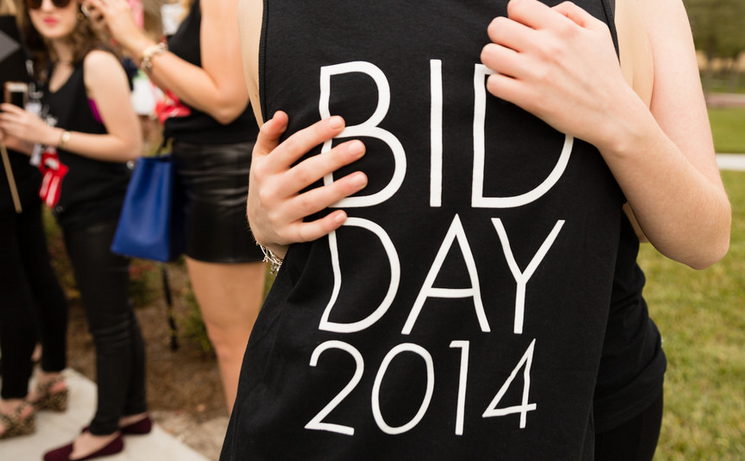 Day 1: Orientation Night. Two hundred and fifty girls gather in Bush Auditorium at 8:30 p.m. The event began with a few announcements on the overall process of rush, each day’s schedule, voting and bid-day processes. Let’s just say it was a lot to handle right off the bat. The girls were called up one by one to the front where they would gather with their recruitment groups. From there, each group headed to different classrooms throughout the Bush Science Center and met the other girls in their group. After a few more explanations on the schedule and overall attire for the week, we were off!

Day 2: Philanthropy Night. We met in our respective Bush classrooms with our recruitment group around 5:30 p.m. (Just before I continue on, let me remind you that this was the night where it was 37 degrees outside!) We got our schedule for the night: which houses we would be seeing, what order we would visit them, and what we would be doing at each house. Around 6:00 p.m. we headed out. The first house we saw was Kappa Delta. After waiting outside for about fifteen minutes, the door opened… and the singing began. Having known absolutely nothing about sorority recruitment, let me tell you, this was definitely something that took some getting used to. We were lined up in alphabetical order and called to the front and linked arms with one of the Kappa Delta members. We chatted for about fifteen minutes, watched their philanthropy video, and were serenaded on our way out the door. One down, five to go. It did not take long to realize that this was routine for each house. The night proceeded with Non Compis Mentis, Delta Zeta, Sigma Rho, Alpha Omicron Pi, and, finally, Chi Omega. Each house had singing, talking, more singing and talking, and finally, more singing and even more talking. We finished around 11:30 p.m., after voting on our four “loves” and two “likes.”

Day 3: Skit Night. I arrived back at Bush in the required attire: nice pants, dressy top, and my favorite J. Crew jacket. We all waited anxiously for the list that would reveal their night’s schedule. At this point in the process, girls are invited back to anywhere from one to four houses. I was pretty satisfied with invitations back to three houses (two of which were my favorites).  Some were elated, some pretty disappointed. I headed to my first house, one that I was greatly considering. The sisters reenacted a scene from SNL with three main characters: Britney Spears, Amanda Bynes, and Kim Kardashian. After it ended, we all chatted a bit and then were escorted out. Before the next house visits, we had a 45-minute break, where some of the girls headed back to Bush to waste the time watching Pitch Perfect. At the second house of the night, once again, I was greeted with enthusiastic chanting and singing as I was guided into a familiar house in linked arms with a familiar face. With a skit that was more song-and dance-oriented, the girls had done a great deal of practicing and rehearsing for their well-performed piece. Finally, guided out once again arm-in-arm, I went to my last and final house for the night. At this house we sat around and a played a variety of games. Before we knew it, we were back at Bush casting our votes a second time. On my way home, I was feeling a little vulnerable to the decision that was out of my control.

Day 4: Preference Night. At this point, only about half of the original girls  from the first day remained.  This was the night that would make or break us. We walked in awaiting that tiny strip of paper that would have either one or two names on it. From 5 to 9 p.m., girls would go to the house(s) that selected them for the third night in a row. Prospective sororities would be able to accurately gauge whether or not these girls would be given a bid. The night continued on like all the others, except this time more intimate. There was still singing (this time slower), there was still chatting (this time more serious), and there were still emotions (this time crying). After having been to these houses for three nights in a row now, I will be honest, my emotions were running high. From all the girls I spoke to, all the videos I watched, all of the crying I heard and words that were spoken, making my decision suddenly became extremely difficult. I reached Bush completely perplexed and was told to go to the third floor. I made my way up the stairs and entered a room of about sixty girls sitting in complete silence. During this time I just kept replaying the things I loved, the things I liked, the people I spoke to, the overall feeling I had for both houses. After waiting for about 45 minutes, the last thirty of us were called up to head over to the voting room. Still in silence, we made our way into the room where were handed red sheets of paper to rate the two houses. My hand shook as the pen touched the paper. I could not do it. I sat back for a minute, “What is wrong with me? It’s just a sorority, and they’re just girls. I shouldn’t care this much.” But, I did. I have never had to make a decision completely—100 percent—on my own before. I looked around the room and I was the only one left. The only one. Why was it so hard for me? I cleared my head, picked up the pen, and letter by letter, wrote down each sorority’s name: one on the first line and one the second. I moved to a chair next to a friendly, young woman who asked me, “How are you feeling right now?” I replied, “Stressed.” I handed her my paper, she looked at it, and asked me, “Is this correct?” I could not get myself to go back to the agony I was in ten minutes prior and I decided to just leave it. I had debated it all day—in fact, all week—and I told myself this is what I am choosing.

Day 5: Bid Day. Ninety of the original 250 girls gathered once again in Bush auditorium highly anticipating their bids. The atmosphere was tense. The head of rush recruitment spoke to us briefly and congratulated us on making it this far. We had done it! As the announcements came to a close, she finished by saying, “You will be receiving your bids.” The room grew quiet. Recruitment counselors handed their group members the sealed envelope in which their fate was enclosed. Some white, some blue, some pink, each one different. Soon my name was called and I was handed my envelope—dark blue. I opened it, slowly. Yes! Exactly what I wanted! I joined the rest of the girls waiting to run to their respective sororities. When it was my turn, I handed the announcer my envelope. As she called my name, I ran to my new home. I ran to the group of girls waiting for me. I ran to my new sisters.