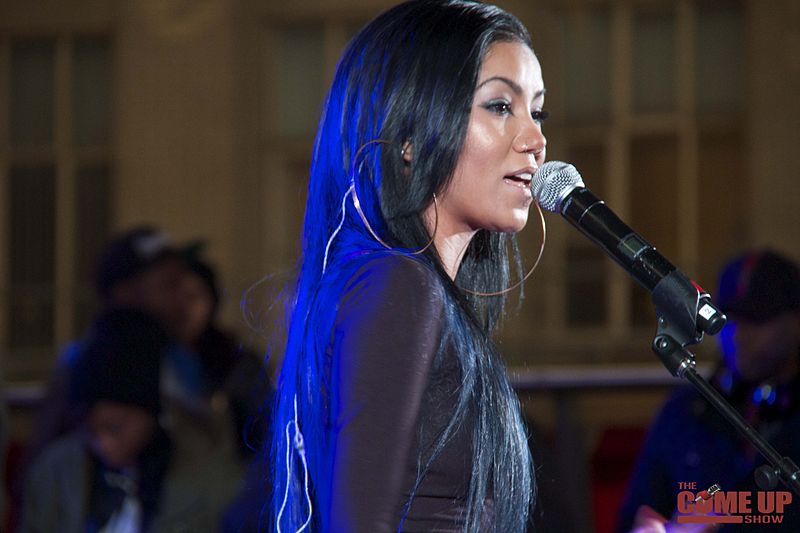 ‘Souled Out’ sells out

Jhené Aiko’s latest album, Souled Out, debuted on September 14 and is already topping the music charts.

Released on September 12, 2014, Jhené Aiko’s latest album ‘Souled Out’ has already debuted as Number One on the Billboard Top 200, honoring the pun it declared. Branded as a chill pop R&B, and rap artist, Jhené mingles sweet sensuality with psychedelic melody on a record that deserves to be in your Spotify rotation.

Jhené makes the point in an interview with GTV to recognize her desire to branch away from collaborative projects. On this first independent album, after her  2013 EP ‘Sailed Out’ and having been featured in rap singles such as Childish Gambino’s ‘Bed Peace,’ Drake’s ‘From Time,’ and Big Sean’s ‘Beware,’ she defines herself definitively as a creative creature. Regarding her sound, she declared that “people compare it to a younger Sade with urban stories.” Relentlessly, her vocals and instrumentals gently and flawlessly echo, but when paired with some series of verses, lose their impact.

Exhibiting this discontinuity is the album’s final track. I wanted to fall for the whimsically named, ‘Pretty Bird,’ but Aiko made the point to reiterate the phrase a total of 53 times; although she herself is a songbird, a little more variety would have been appreciated here. We can openly acknowledge that her voice is exquisitely delicate, potentially appealing to listeners even when she speaks the same two words repeatedly. However, that doesn’t mean she should.

As anticipated, the songs have peaks and valleys. One peak is the introductory single, ‘Limbo Limbo Limbo,’ which ends on the haunting note, “she was just as basic as the universal language of love necessary to keep him alive.” If that doesn’t resonate with you, just read it again–because it should. The entire piece is dedicated to a poignant, detailed narrative of placelessness, destiny, and fear, mirroring the struggles of Aiko’s early career and personal life.

If we’re being honest, I wouldn’t mind making ‘W.A.Y.S.’ (Why Aren’t You Smiling) my alarm for Monday mornings, because it’s rhythmic, motivational, and definitely vibin’with an existential mantra of ‘nothing really is and everything really isn’t.’ It’s ideal for an early morning drive on a highway to an airport, just as the dawn is waking  up on your dashboard, your mind filtering through the transformative night before. Or when you’re making smoothies, too.

For the poor dude who had the song ‘Lying King’ written about him, I’m sorry that Jhené called out both of your parental issues in the same track, but at least she offered you a sick hook, though lyrics fall short. Unfortunately, he fell victim to his ‘pride’. Did you catch the title pun? It’s the little things in life…

‘To Love and Die’ and ‘Eternal Sunshine’, despite their conflicting titles, both took a special place in my heart and ears upon my first listen. The former features a ‘50 Cent’ quote and instrumentals that mirror those of Drake’s Take Care. Conversely, the light nearing the end of this album’s tunnel is ‘Eternal Sunshine,’ the album’s tenth track. Taking its title from one of Aiko’s favorite films, ‘Eternal Sunshine of the Spotless Mind,’ we see messages begin to morph darkness into light, pain into beauty, and doubt into strength. The song ‘Spotless Mind’ has a powerful resonance also: “Shame on me for changing? No, shame on you for staying the same.” On the record, we continually hear the tales of Aiko’s path diverging from her past tribulations to her present place of success: the irony is too much and we cannot get enough.