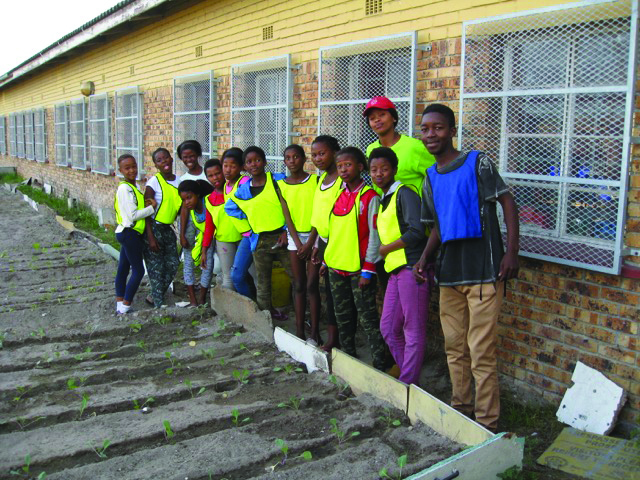 Cape Town, South Africa, often is rated as one of the most beautiful cities on the planet. Its curving waterfront on the Atlantic Ocean wraps around a large mountain, folding into a national park that provides spectacular views from above and below.

On the edge of this bustling metropolitan area, however, lie vast areas of urban poverty known as townships—vestiges of the now-defunct apartheid system that once forced minorities into segregated areas where basic services such as clean water and bathrooms were scarce. Most homes are cobbled together with “found” materials—construction lumber, corrugated metal, and stone. Treeless open areas are strewn with garbage and perused by stray, hungry dogs.

As one of my colleagues wondered during a May Rollins College faculty/staff trip to Cape Town: “How can a place so beautiful be so terrible to its people?” That is the question we tried to understand while looking for signs of hope and progress.

I focused on environmental issues in the townships, which brought me to the Amy Foundation, a non-profit group founded in honor of a young U.S. student, Amy Biehl, who was senselessly murdered in 1993 the Gugulethu Township. In a heroic act of reconciliation, her parents forgave Amy’s four attackers. They were released after serving five years in jail and today two work for the foundation, helping with programs that empower and educate youth.

In 2000 the foundation started a Greening & Environmental Program in Gugulethu. The program now operates in different capacities at 10 schools with 100 enrollees at an annual cost of about $16,000. Its adult-led afterschool programs teach children about the environment with a curriculum that includes water use, recycling, and pollution. Participants also visit area botanical gardens and environmental centers.

I visited the Vukukhanye Primary School (its name means Wake Up and Shine) in Gugulethu to observe the program. The school is an oasis in the grim neighborhood of cluttered homes and trash-lined streets. It is surrounded, of necessity, by a high fence topped by curling barbed wire.

But inside the grounds are sprouts of optimism. A plant overflowing with blossoms. Joyful teachers in bright African-patterned clothes. Energetic children dressed in chartreuse bibs that denote their participation.

This day the children learned the parts of a plant, cheering their correct answers. Then it was off to the school’s community garden, where, although it was between growing seasons, a few onions, beans and lettuces remained. Two girls pulled up small carrots to proudly display their crop and argued about which plant is their favorite to eat.

The Amy Foundation currently operates four school community gardens—a project it hopes to increase to six in the coming year in its goal of teaching sustainability, healthy eating, and useful life skills.

“Basically we would love to see healthy, flourishing veggie gardens at each of the schools where we run afterschool centres and even expand to schools where we are not actively running afterschool sites,” writes Amanda Mac of the foundation, adding that the work brings much joy. “Growing children and growing plants are pretty similar and to see both happening is truly beautiful. Certainly harvest times are always happy occasions and seeing the children’s growing interest in the programme is always heartening.”

Here the roots of environmentalism take hold in a tough, gritty world. But it’s a start that can help these children “grow” a different future.