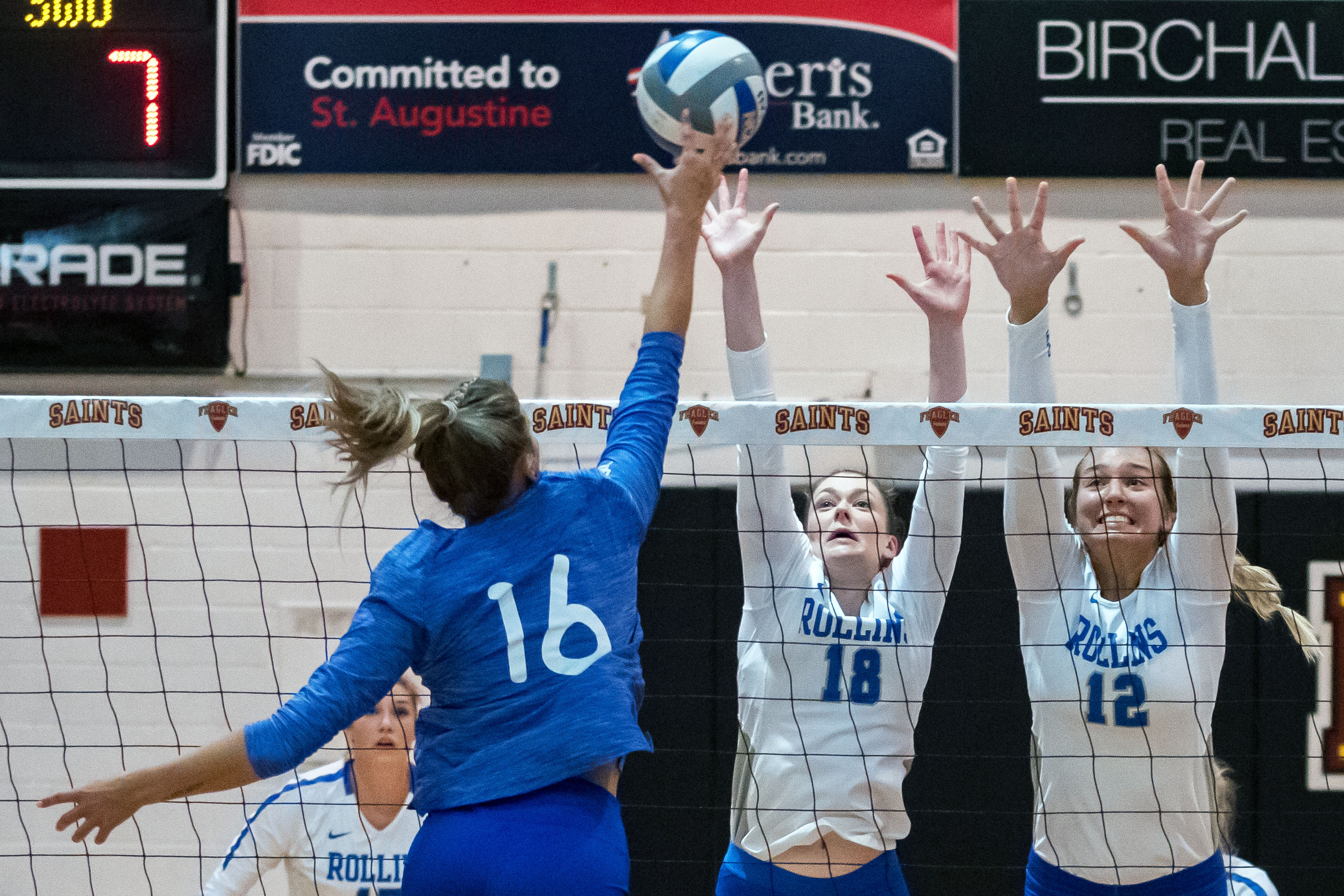 When her volleyball teammates reported back in August, Rachel Reeve (‘21) was already on a special kind of pre-season training.

The Adelaide, Australia native received her first call-up with the Australian National Volleyball Team this year. She represented the Volleyroos in the VTV International Women’s Cup and Asian Women’s Volleyball Championship. The latter serves as the first stage of the Olympic Qualifiers.

Since transferring last spring from Tyler Junior College, Reeve has proven to be a reliable libero and a natural leader for the Tars, especially at the Flagler Invitational and Bentley Tournament.

“Being an athlete, you’re but when you have your country’s name on your shirt, it’s this whole new level. The pressure, the nerves—it amps everything up,” said Reeve. She described the experience as the pinnacle of her career.

Rollins Volleyball Head Coach Mika Robinson highlighted the “tremendous honor” of participating in a national team: “Rachel’s selection on this team speaks to the work she has put in over the years to become one of the best players in Australia.”

Robinson will rely on the experiences of Reeve and returning upperclassmen as the volleyball team begins its 2019 campaign. The Tars are working hard to turn the 4-26 record from last season into a distant memory.

The VTV International Women’s Cup is an annual tournament hosted by the Vietnam Volleyball Federation for teams in the Australasia region.

“There is a variety of countries that take part,” said Reeve. “We even got to play North Korea, which was cool.”

The level of competitiveness in the tournament was quite demanding. Reeve appreciated the team-building that took place, as a large number of first-time players were convocated.

Thus, the stage was set for the Asian Women’s Volleyball Championship, whose top-ranked teams advance to the Women’s Asian Continental Olympic Qualification Tournament this January. Australia found itself in the same pool as some of the region’s top dogs, including Japan, Kazakhstan, and India.

In a monumental effort, the Volleyroos came in ninth and qualified for the next round, something they had not managed in over 15 years. The suspenseful moments came in the classification round for 9th through 12th places.

In the semifinal round, Australia gained a 2-0 set lead against its all-time rival New Zealand, before two extra-point sets leveled the score. The Volleyroos managed to secure a dramatic win in the fifth set and advanced to the final against India.

After finding itself with a 2-0 set deficit and its back against the wall, Australia overcame the odds to grab the win in another five-set thriller.

According to Reeve, this was within the Australian camp’s expectations.

“We reached our goal of qualifying for the next tournament, which made us happy. Naturally, there was a lot of room for improvement,” Reeve said.

Should it win the January tournament, Australia will get the chance to play in the Olympics. Reeve and her teammates are highly motivated, but they are also aware that there is plenty to do until then.

“Getting to this point was a big deal, but now we have to win the next round. It’s a matter of going from ninth to first from here to January,” Reeve said.

One teammate in particular offers Reeve extra motivation. Her sister, Rebecca, has been the libero of the national team since 2014.

“That was our dream since we were literally 10 years old, to play for our country, together,” stated Reeve.

It was an emotional moment for their parents, who had seen them together at club and college levels, but never in the senior National Team.

Until January, Reeve will be busy with the Tars, who will begin the season with a series of away games. Reeve emphasized the importance of a strong start, although the team will be aiming to improve throughout the season.

“The girls are all so lovely. I know they didn’t have the season they wanted last year, so everyone is on board to absolutely turn that around and have a Cinderella season this year,” Reeve said.

She lauded the supportive environment of the team and their resilience. Reeve is particularly excited about the incoming freshmen, since they will be dealing with a new level of competition and determination.

Coach Robinson is satisfied with Reeve’s integration in the team so far, praising her natural leadership and ability to relate to a wide range of personalities. As the season progresses, Robinson will be counting on Reeve’s skill and maturity in times of adversity.

Rollins Volleyball finds itself in a unique situation with no seniors in its current roster, meaning the current cohort of players will also be playing together next year.

“We’re all excited about what we are building over the next two years,” Reeve said. “The spring was really good. We made a lot of big steps and improved so much in so little time. I’m sure it will keep going.”