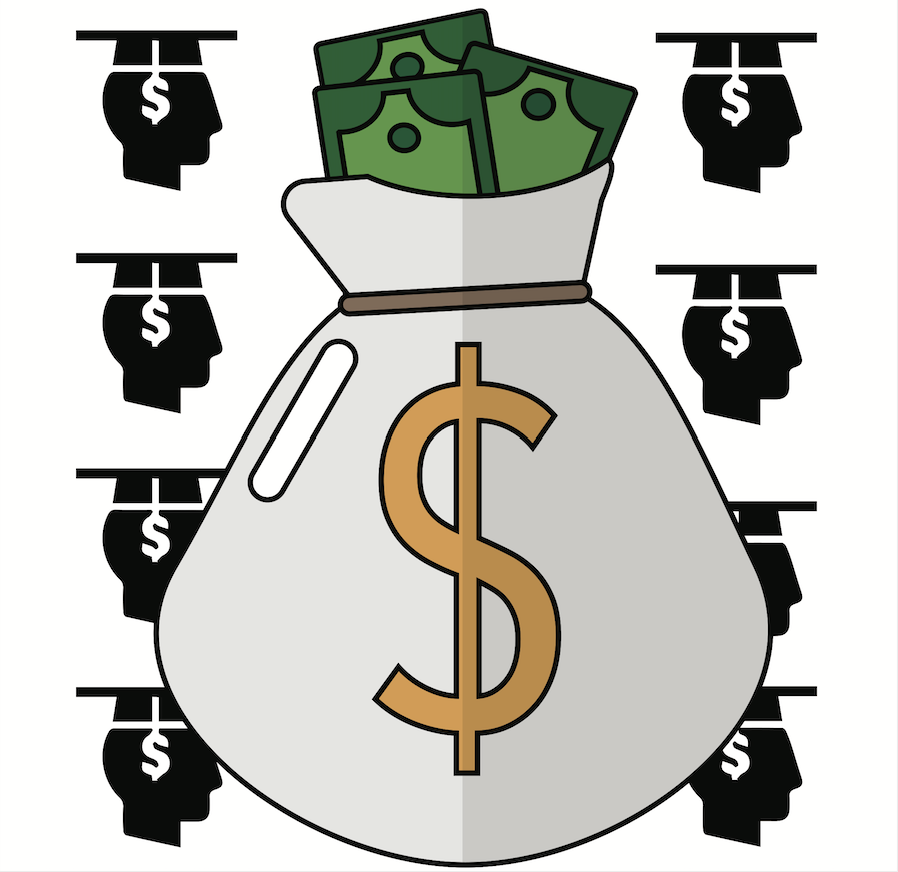 By Heather Borochaner on October 3, 2019

After former Rollins students have transferred due to cost, a group of students are seeking to challenge the high cost of tuition and the social isolation they feel from their peers based on their socioeconomic status.

The group was started by Wyatt Deihl (‘21) in a public post on Facebook, where he called for an end to “the discriminatory policies at Rollins College that are not conducive to the success of low-income students and those that create unnecessary barriers for low income students.”

Deihl’s goal, his Facebook post said, was to have a group of students meet to discuss ways in which Rollins could better meet the needs of low-income students. “My hope is that we as a collective will be able to pressure the administration to become a truly inclusive and equitable campus,” he said.

Deihl later explained in an interview that “the classism coupled with financial inaccessibility widely excludes low-income students from having equitable college opportunities in comparison to their more affluent peers.”

Deihl is a first-generation high school graduate and a community college transfer student. “I have worked very hard for the opportunity to attend an institution of higher education,” he said. “That being said, it is my belief that I now hold an obligation to ensure equitable opportunities for other students in my or similar positions.”

Deihl was awarded the most prestigious scholarship in the nation for community college students in 2018, the Jack Kent Cooke scholarship, which awarded him $40,000 a year. But even with that award, he could not fully pay his tuition to Rollins.

“After my first semester at Rollins, I felt so marginalized as a low-income transfer student that I took steps to transfer to another institution,” he said.

By a turn of fate, however, he is still at Rollins and wants to work to help students struggling with their tuition who lack the benefits of high-reward scholarships.

One such student was Matthew Ciesko, who spent three semesters at Rollins before leaving the institution after the tuition became too costly. “I couldn’t afford it anymore,” he said. “Even though I was only there for 3 semesters and had numerous scholarships and grants, I have twice as much student loan debt than friends who went to a state school. And I don’t even have a degree to show for it!”

Deihl said he had felt alone in his experiences until he started hearing the stories of others who struggled with being a low-income student. “Many stories have coalesced and inspired me to spearhead what many are calling a major social movement on campus,” he said. He said stories, “in which low income students have been directly disadvantaged by Rollins’ staff, policies, and classist culture,” encouraged him to make the Facebook post.

Steve Booker, associate vice president and director of financial aid, does not believe that the price of Rollins prevents the campus from being a wholly inclusive environment. “Over time you’ll see that we’ve increased the number of students with Pell Grants,” he said. The Pell Grant offers up to $6,095 based off of a student’s need, according to their FAFSA filing.

Booker said this increase “means more lower income students are coming to Rollins, so with the help, they can afford it.”

Booker said the financial aid office has also been awarding more aid in the past few years to help bridge that gap. “We are certainly a higher cost institution than public ones but the amount of aid we offer is also significantly more,” he said.

“We admit students on their academics, not their finances. We want to admit students, then leave it up to the family whether they can afford that cost or find the resources we can help to look for.”

Booker said that students having experiences like this are unfortunate. “We’d never want a student to feel like they shouldn’t be here,” he said. “That’s not the type of service we want to deliver. We want them to focus on their academics, not let finances get in the way of that.”

Booker said the office knows finances can be stressful and do not want student academics to suffer because of it. They should be able to count on getting their aid every year.

Deihl said that the number of responses he received on his Facebook post made him realize the extent of the classist culture at Rollins. “The response was overwhelming as dozens of current and past Rollins students reached out sharing their stories,” he said.

“The issues that plague the college experiences of low-income students at Rollins are abundant,” said Deihl. “Examples include abrupt and unannounced increases in tuition which have blindsided many students and forced them to rely heavily on student loans.”

Booker said he would like to hear more from students on these experiences. “We want to help students understand, be transparent, no question. I want to know where students are finding out about [the tuition increase].”

He said tuition usually increases three to five percent per year, typically communicated by the president’s office. “We include cost in the financial aid award letter. We want to know, how can we better communicate that? We don’t want students to be blindsided,” he said.

Financial aid award letters are typically sent out before the start of the semester.

Booker  said students who meet staff in the Financial Aid office are told that tuition will likely go up every year. “Count on the increase so you can budget for that,” he said.

Booker said the tuition increase typically comes below that five percent increase prediction. Usually, the increase is within the three percent range. “I use 5% because I’d rather overcommit and if a family can budget that increase, then when the tuition does increase they’re prepared for that.”

Booker said that aid also increases with rising tuition, though it is not “dollar for dollar.”

As of the 2019-2020 year, the cost of tuition at Rollins is $3,970 greater than it is at Harvard University. “Students are paying for boutique rather than elite,” said Deihl. “Rollins lacks the prestige, resources, and educational opportunities that warrant the cost of tuition.”

Booker said that tuition increases only when there is a need to deliver services. “We are doing our best to provide as many services as we can, offer the majors that students want,” he said. “We don’t necessarily compare our tuition to others. We are trying to manage the budget Rollins has to maximize student and educational value.”

Deihl said that there is currently no safety net to ensure equitable opportunities for all students. “Disposable income is required to truly experience all that Rollins has to offer from participating in field studies, study abroad trips, and even specific majors.”

Deihl said delays in disbursements are another problem for low-income students, as many rely on the money from disbursements in order to buy textbooks and other supplies.

Booker said that disbursements are always received the first Friday after classes begin, and it has been that way since he started working at Rollins 11 years ago.

Refunds are then generated two weeks later, and it is done this way because of the Bright Futures scholarship program for in-state students. That scholarship is determined by the amount of credits a student is taking for the semester, so refunds are not given out until the add/drop portion of the semester is finished to ensure part of a refund will not have to be taken back if a student drops a class.

“I would love to hear more from students on problems they may have with disbursements. We can have that conversation to make sure you have the money you need. If it’s something we’re doing, I want to make sure we’ve solved that problem,” said Booker.

Deihl said, “While Rollins has not constructed barriers specifically designed to hinder low income students, they have yet to publicly recognize that these barriers do exist, and the administration has done little to acknowledge or rectify these hindrances or to increase accessibility or inclusivity for low income students.”

Dr. Amy McClure, assistant professor of sociology, among other faculty members are aware of this struggle among students after researching the impact that financial instability has had on their lives. She said low income students are more likely to internalize their problems, which may include financially supporting their families on top of covering their tuition, and can even feel socially alienated due to their financial status.

Therefore, she said, “I really think it’s a great idea to encourage lower income students to get together to start having these conversations. They can figure out what they have in common, what issues are systematic or individual.”

“The event was packed and audience members listened so eagerly and were really animated in their discussions,” she said.

“We also had many staff and faculty from lower-income backgrounds come to stand up and identify themselves and support our students in this tough dialogue. The event was a huge success and demonstrates the support that does exist on campus to push for these tough conversations and to seek out new perspectives. I found it energizing and promising,” she said.

While support from faculty is there, said McClure, “It is important for us to step back and let students take the lead. Marginalized students should find their voices without us injecting our own agendas.” However, she said that the faculty will be there if students are in need of support.

McClure hopes that, by the end of these student meetings, they will discuss how best to reach out to Rollins.

Deihl hopes that this group meeting will open the dialogue concerning the low income student experience at Rollins. “The meeting will serve as a space for students to vent their grievances in a constructive way that will allow us to develop effective solutions for these issues,” he said.

While Deihl has yet to schedule the group’s first meeting, seeking more support before he does so, he encourages any low income student struggling to pay their tuition to contact him at wdeihl@rollins.edu.

Booker said that Financial Aid would be open to have any conversations and accept constructive criticisms if students reached out: “we want to hear those things. And if there are things we can change we absolutely want to change.”

Booker said that every month, Financial Aid creates a service map to walk processes through the eyes of a student to see if there are any roadblocks that would hinder a student’s access to aid. “That way, we can take a look and adjust those processes,” he said. “I am always happy to have one-on-one conversations with students. Our communications go out and we know it’s through our lenses and we try to keep students in mind but if students have feedback about what that’s like we will adjust what we can.”

Booker wants to emphasize that the financial aid office is open. “We are not set in our ways,” he said. “We are on [the students’] side; we want to provide aid and allow students as much aid as possible within the guidelines and regulations that are out there.”

He said the answer might be no sometimes, “and that’s the hardest time when there’s nothing that can be done. But we want to look and see if there are any more opportunities for [students] if that is the case.”