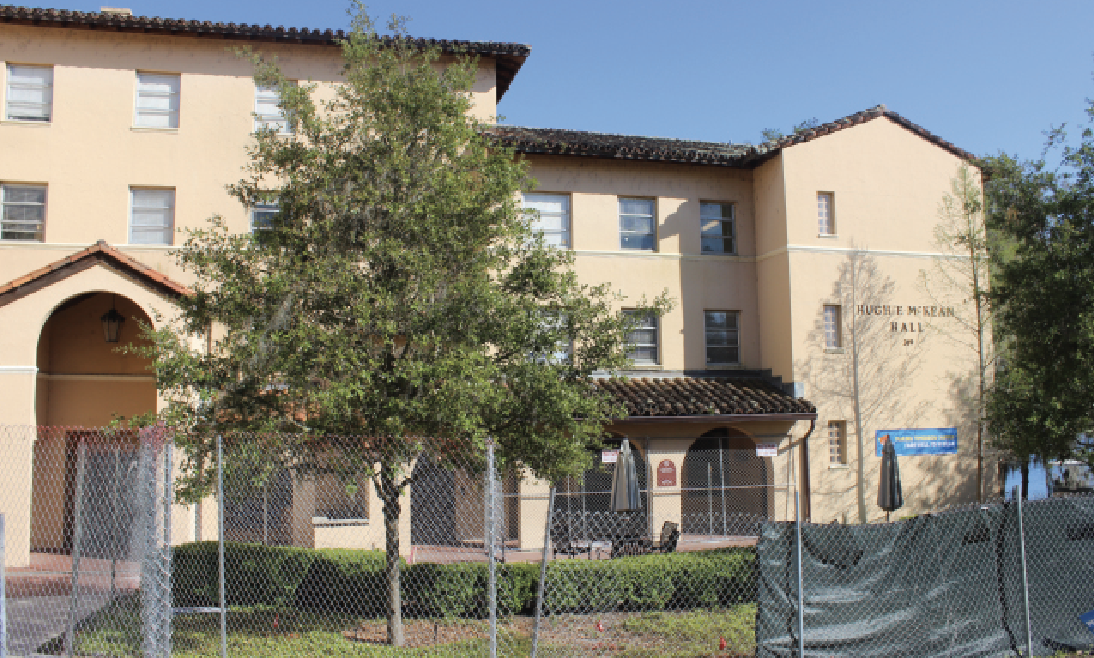 The Class of 2022 will be the last class to ever joke about the ‘McKean pods,’ wonder why their dorm looks so different than the one they saw on the tour, or get lost in the hallways of the building’s maze. McKean has been a part of Rollins campus since 1965, but its demolition will commence this summer. Current and past students offer their reflections:

“It’s a really bittersweet feeling seeing McKean go! It’s sad that such an iconic hall is leaving, but it’s also so exciting to see what new memories and community will be built here in the future!”

“I think it’s time for McKean to go. It’s had a good run, but no one wants to live in it anymore.”

“I am kinda sad that McKean is coming down. It was quintessential to the college experience—nothing prepares you more for the horrors of the world than screaming at all hours of the night and day…. Lakeside is bringing us back to the prep and unnecessary luxury that this college was founded on in 1885. To me, that is an assault on why I chose Rollins to begin with—the small cohort sizes and the lack of anonymity. Although McKean was shitty in its ability to function as a dorm that could pass a health and safety inspection, there is a comradery of those who have lived in McKean throughout campus and the alumni. McKean has shaped all those who have had the unfortunate pleasure of living within its walls. If you can survive McKean, you can survive anything.”

“My friend once said, ‘some of y’all didn’t have to live in McKean and it really shows’ and I couldn’t agree more. McKean taught me that a home doesn’t mean the actual structure you live in, but the people you live with. Plus, we always knew the people in Ward were jealous of our community. RIP McKean, thanks for the mems!”

“I definitely think McKean needs to be knocked down this year, just because it’s not in the greatest state, but that also poses a lot of issues for the people who live here now because we have to deal with bad living conditions as well as loss of sleep and alternate routes to get to class due to all of the construction around us.”

“It was clearly one of the oldest buildings and it was clearly not as aesthetically pleasing as the other dorms at Rollins. It probably wasn’t completely necessary for it to get dismantled, but if they have enough money to create something better, then that’s good. The walls were really thin and that made it a difficult place at night. You could hear a lot of noise from the rooms above, below, and beside you.”

Ben was an RA during his sophomore year, from 2016 to 2017. “A favorite memory was playing volleyball with residents and other RA’s on the court next to the lake.”

“It’s good that McKean is being torn down, because the living conditions are not suitable, but they haven’t been suitable for a long time. I’m frustrated because people in McKean pay the same price as people living in Ward, but [McKean] is a less quality hall.”

“I wish it would have been torn down earlier, so we don’t need to suffer through all of this.”

“I’m so happy that McKean is being torn down this year because no one deserves to live here. It’s absolutely terrible.”

“Everything was cool until they caged us off and blocked every convenient walking path.”

“They should’ve torn it down the year it was built.”

The Sandspur
More from CampusMore posts in Campus »