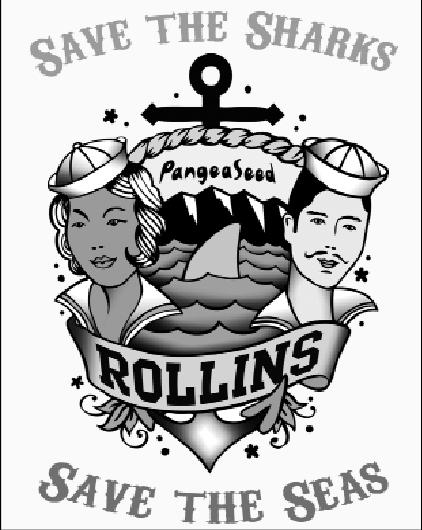 Students Make a Splash to Save Sharks

More often than not, we tend to think of sharks as the ugly, cold-blooded killers they are so often portrayed as by the sensational mass media, and we forget to acknowledge the sheer beauty and complexity of these creatures, their contribution to the ecosystem and, most importantly, how much harm our own species has inflicted upon them.

Fortunately for the Rollins community (and for sharks all over the world), marine biology majors Guillermo Ortuno Crespo ‘14 and Alicia Berrios ‘14 have made it their work to spread the word and their passion about these often misunderstood creatures. Crespo and Berrios developed the Rollins branch of PangeaSeed last semester after being asked to do so by the founder of the original Japan-based organization.  The Rollins club is now the largest PangeaSeed operation and the first international one.

“As an organization, our main aim is to increase awareness about shark finning, which is a practice that brutally kills 237,000 sharks every year, through special education, ecology and design — that’s what the SEED in our name stands for,” Crespo said. “Our specific aim is to spread awareness about the issue at Rollins and in the surrounding Winter Park areas, but in the coming semesters we plan to spread awareness in the greater Orlando area as well. Our first event, for example, was a movie night. We showcased a movie called Sharkwater, which talks about shark finning and production in detail. Thirty students attended the event, which was great for a first event. Our next step was to start having meetings every Tuesday, which has been successful as well,” he said.

On the first official day of the organization, 112 students joined, making it the largest on-campus organization on the first day alone. The organization now has 153 officially registered members, and 829 members on its official Facebook page.
“We’re very active in spreading awareness through design right now. The organization plans to have art exhibitions in Switzerland, Australia, New Zealand, Japan and California,” Crespo said. PangeaSeed is also having a special event for Rollins called Rollins Shark Fest. This event will take place April 21 at the Cornell Fine Arts Museum. The festival will showcase art by 14 artists from Rollins and three artists from the University of Central Florida. There will also be free food from Sodexo and music by DJ Xplosiv. The event is sponsored by ROC, Sodexo, and Response Products, a neutraceutical company. In associaton with the Guy Harvey Ocean Foundation, PangeaSeed plans to showcase his film, This is Your Ocean.

As most of the harm to sharks comes from the food industry, PangeaSeed attempts to tackle the root of the problem — people’s eating habits. The organization plans to have a sustainable fish-eating day on campus, where they will offer “sustainable” species of fish at the Campus Center — species that can be consumed without adversely affecting the marine environment. This will be accompanied by information on these species, as well as on species that are less sustainable.

“We plan to make a catalogue of all Asian restaurants in Orlando that are shark friendly,” Crespo said. With the permission of these restaurants, the catalogue aims to promote the “shark-friendly” restaurants (those that do not sell shark fin soup), raise awareness about the issue, and empower people to choose to avoid funding the shark-finning business.

Another Rollins PangeaSeed initiative is to support Senate Bill 1002, raised last July, which  would protect Florida sharks from shark finning. Florida’s shark populations have declined by over 50 percent, but the bill was withdrawn from further consideration on Jan. 17. In an effort to put this bill into motion, PangeaSeed Rollins students are handing out petitions for students and faculty to sign. These petitions will be hand-delivered to Governor Rick Scott.

The organization has an exciting event in store for next semester, which should attract many more students to the group in the near future. In cooperation with the University of Miami, Rollins PangeaSeed is taking 10-20 students, chosen through an extensive selection process, from Rollins to Miami for a shark tagging trip. The students will dive with and tag the sharks, allowing scientists to study their behavior and deduce patterns that will ultimately aid in conservation efforts.

In the span of a few months, PangeaSeed at Rollins has achieved an impressive amount of success both in terms of members and support gathered, and in terms of the founders’ forward-thinking attitude and originality in creating new and exciting ways to spread their cause. The Rollins community can expect much more from them in the coming future in terms of new events and valuable work in the field of environmental conservation. To learn more, visit its website at www.pangeaseed.com.