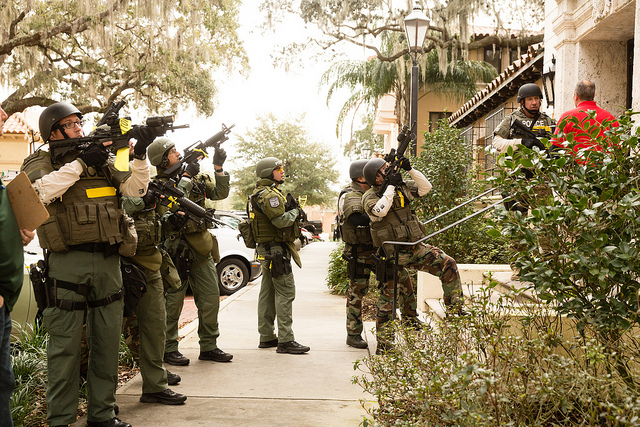 “A shelter in place notification is in effect. Go into the nearest room and lock the door. Await further information.”

Last week, this R-Alert message was sent campus-wide in response to a shooting and robbery a mile away from campus.

No student ever wants to receive a security alert from their school about an active threat. With shootings happening in apparently any place at any time, the minimal information turns to fear very quickly.

After living through the tragedy in my hometown of Parkland, receiving this text message affected me quite a bit. I know I am not the only student who has experienced gun violence so close to home. So, when this message was sent I, like so many others, fell into a scramble for more information.

First-years, like myself, have yet to get used to the R-Alert system. So, when a text message is sent out with a warning like the one from Monday afternoon, the initial reaction is one of disbelief.

It didn’t feel real at first. I have been here for a month and already a lockdown?

Then, the reality of the situation began to process as a series of thoughts and questions ran through my mind: “Is this serious?” or “Is this a drill?” turns quickly into “Even if it’s not serious, I should act like it is.”

Once the potential severity of the situation takes, the fear sets in.

Texts from friends flow in faster than security alerts, and rumors start to spread. Theories abound from there: from unconfirmed and unsupported locations of the gunman, to his motive, to a dozen different accounts of the incident itself.

Lasting about two hours, the lockdown dragged on as students and faculty could do nothing but wait. Students like Mariah Haskell (‘22) mentioned the increasing frustration of sitting around with no new information while others were not taking the lockdown as seriously.

According to Ken Miller, assistant vice president of public safety, said, “Rollins was notified of the incident on Monday afternoon by Winter Park Police.” Miller said that protecting the students, faculty, and everyone else on campus is his first priority, so when the Winter Park Emergency Dispatch Center told campus security to lock down the campus, they did so before asking any more questions.

While the official story was eventually released, I still had a very specific concern regarding campus security: why the lockdown was lifted before the suspect had been caught.

As to why, Miller said that Winter Park Police remained at the crime scene as well as the surrounding areas, searching for the perpetrator. “Our decision at that time was entirely consistent with the direction that was provided,” said Miller. He also wanted to inform students that next week he will send out a series of frequently asked questions regarding how the R-Alert system works to “continually learn and try to improve our processes.”

Living in fear and paranoia is the opposite of a solution when it comes to acts of violence like this. Proper safety precautions are in place to protect this campus from such an event. This incident came and went without bringing danger to the campus itself, but did bring it too close for comfort. Be safe.