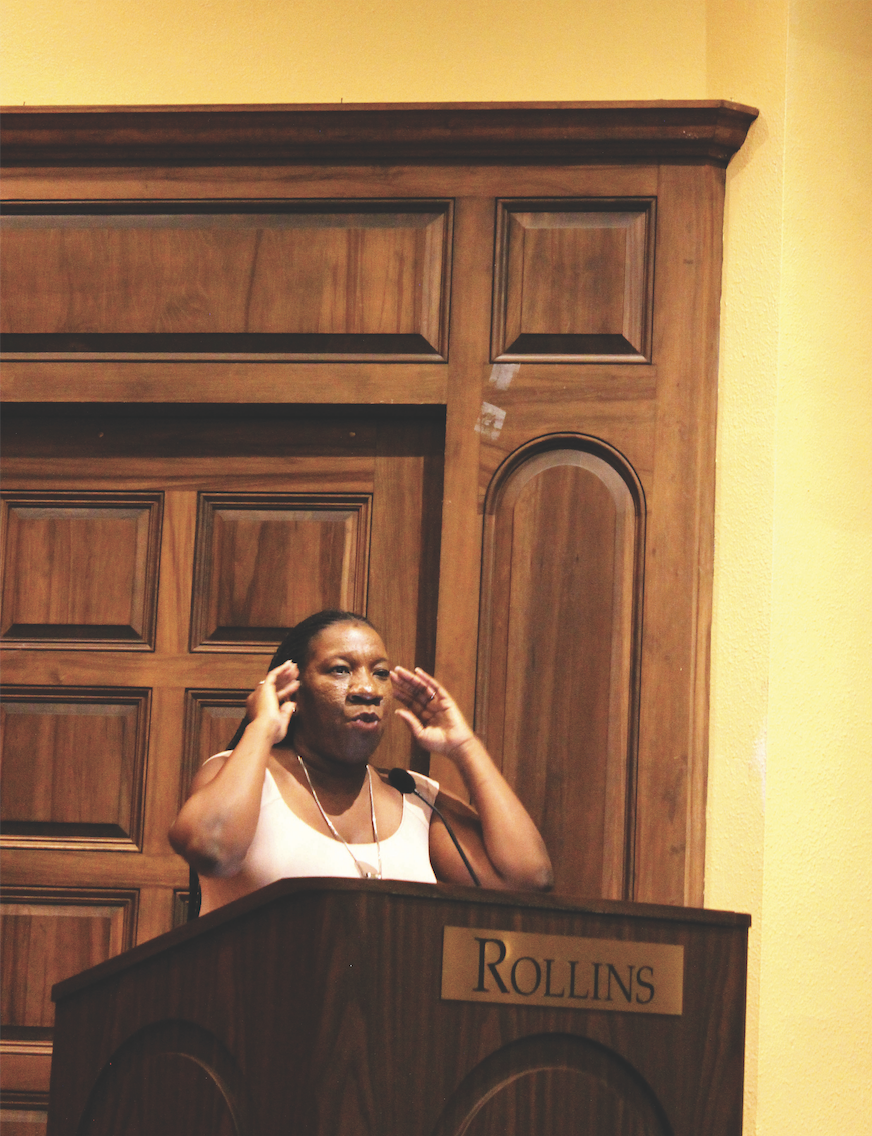 Tarana Burke, developer of the #MeToo movement, inspired a Rollins audience with a memorable speech and her powerful voice. She dropped bombshells, and her curated quotations were followed by roaring admiration. She is human, but to everyone in Bush Auditorium, she seemed like something more—a machine able to spit out solutions and make them stick.

Burke opened her speech by reviewing staggering statistics and asking the audience to shout out people they know have been affected by sexual violence. Most, if not all, names were celebrities. She addressed this fact with disgust.

“I have no use for celebrities,” Burke said. “We keep trying to reduce the movement into names and celebrities. They are nonsense and distractions.”

Burke’s purpose for developing the #MeToo movement was to empower individuals who do not already have societal power. She does not approve of how the movement has been manipulated to focus on the wealthy.

Of course, celebrities’ experiences with sexual assault are still valid, but their faces were not the figureheads she envisioned to lead her movement.

Burke believes that society is made up of individuals, and society is not a separate entity in itself. She said that society does not impose things on us since we are part of the problem. Her point helps us realize we are not passive members of society—we are active participants and stakeholders in it.

With this philosophy, Burke believes in the power of community, saying, “Your power comes from your collective voices.” She also said that when every individual speaks out, that is when change happens.

Furthermore, Burke avoided alienating any gender in the room. She emphasized that sexual violence is not just a women’s problem, and it is not a weapon that should be used to isolate others. Women slut shame, men harass one another—all of us carry sexist ideas. Sexual violence does not discriminate, but the way we respond to it does.

“We keep trying to reduce #MeToo into a gender war,” she said.

I agree. I am sick of hearing people bash men using blanket statements, and I am tired of hearing news channels rip apart high-status men. While awareness is important, there is so much more to sexual violence: it is in this school, affecting individuals who cannot speak up. It happens in our own dorm rooms, on Fairbanks, and at parties. It is crawling across campuses, but the media focuses on Hollywood.

After she read the mission statement, the audience roared and stood. Girls beside me whispered about creating a group in their dorm where they would be able to talk about sexual violence freely. Another girl suggested writing a constitution and sending it to President Cornwell. Words of change rolled throughout the room, even after Burke left the stage.

Later in her speech, Burke said, “College is the place where you get to reimagine safety.” Indeed, Rollins is where we will start.