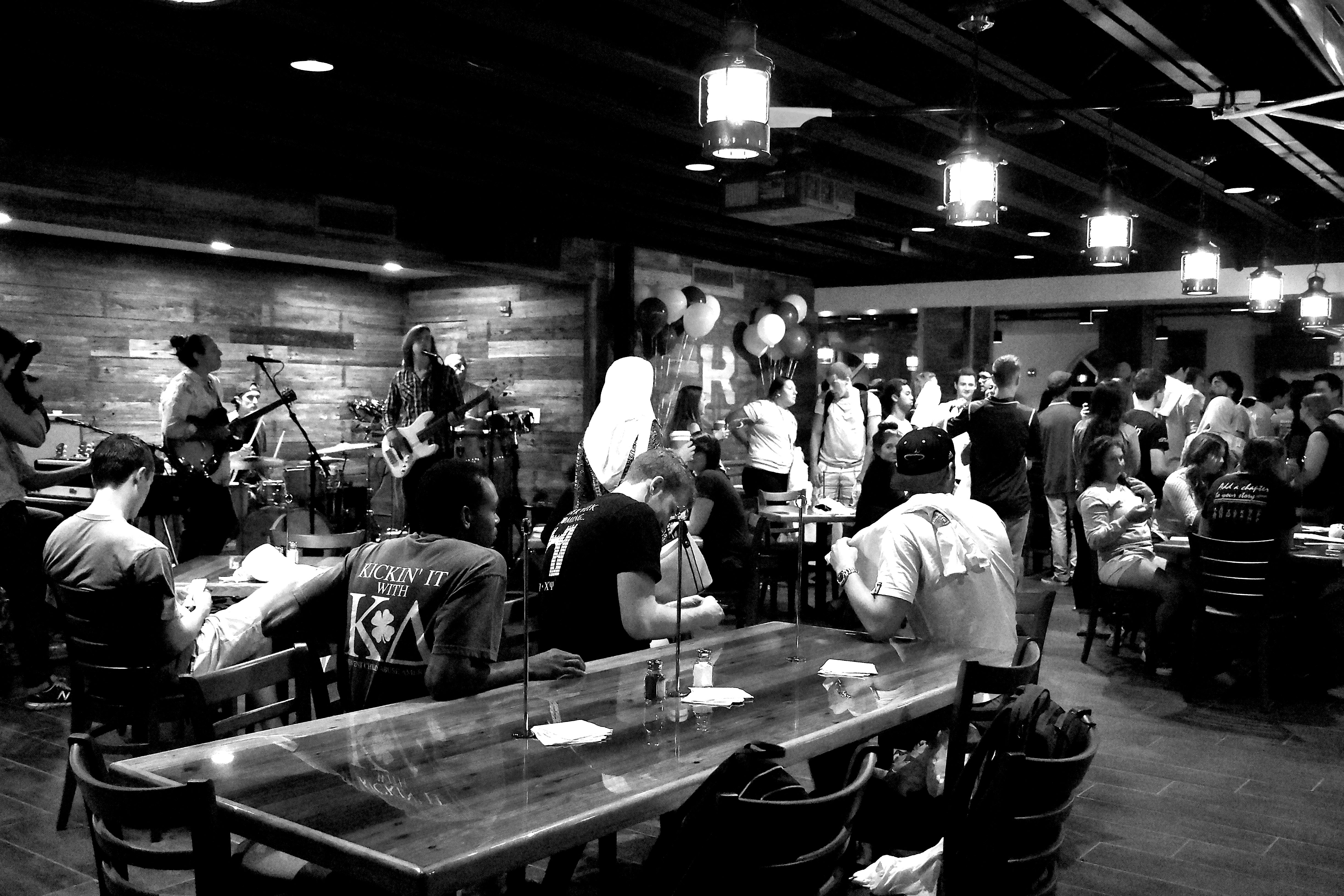 While Thursday nights are not typically seen as occasions for great festivity, last Thursday brought together a swarm of jubilant students, faculty, and staff to the lower level of the Cornell Campus Center—all celebrating the long-awaited grand opening of Dave’s Boathouse, the new pub on campus.

The entire event—and the new venue—was absolutely nautical. The tables’ lacquer shined; pseudo-portholes displayed images of the Rollins Campus; the Groove Orient provided background music that had everyone bobbing their heads; commemorative t-shirts were passed out; mouth-watering free-samples circulated; and a dazzling new bar sat in front of the exit facing the pool, surrounded by flat-screen televisions with sports games. Patrons could not walk more than three steps without bumping into someone.

A long line almost immediately formed in front of the grill, which did not begin serving food until half an hour after the opening’s official start time. Servers brought out several appetizers to appease the curious and hungry crowd. The naked wings were everything you would expect from typical bar-food, but the following menu items began to showcase the flair that Rollins Dining Services is known for.

Dave’s has upgraded their renowned mozarella sticks to tequeños, a traditional Venezuelan snack filled with white cheese whose exterior resembles more of an eggroll than what we are used to—but is delicious nonetheless. Another dining delight was the mushroom and artichoke arancini: Sicilian fried and stuffed rice balls complemented with Dave’s signature tomato sauce.

A word of caution, though: some of the small plates are more worth your buck than others—$6 only covers two arancini balls. Others, though, such as the poutine, are more than filling. If you are not familiar with the Canadian classic, it consists of french fries smothered in gravy and cheese curds. For more satisfaction, you can also add a serving of protein—salmon, steak, or chicken–to your poutine.

Campaigners for fresh, healthy food can rejoice: all of the beef served at Dave’s is grass-fed. Evocative of BugerFi’s delicacies, each top bun has the added touch of a branded anchor image. There is also a decent selection for veggie-lovers, including salads, quinoa, and a vegan burger.

The desserts, too, are no joke. The deep-fried cheesecake combines the goodness of country fair cuisine with Rollins’ signature elegance—and the accompanying fruit sauce is exquisite. The Perfect Brownie also lives up to its name, crafted with Nutella and white chocolate. And, yes, the milkshakes are back—all made with Fair Trade ice cream. While the menu does not have a standard price for the customizeable treats, the milkshakes’ starting price is $5.59 plus tax.

The alcohol, of course, was also a big hit. Dave’s has a selection of craft beer featuring favorites such as Yuengling and Miller Lite, organic IPA, and gluten-free hard cider. Marcie Oliveira ’17 commented that the beer is “reasonably priced,” ranging from $6 to $9 for a 16-ounce mug. While there is no hard liquor, there is wine on tap—offering a more unique and refreshing taste than wine straight from a bottle. There is an equal balance of red and white wines—three each—offered, all supplied by Florida’s only sustainable winery, Quantum Leap. The wine ranges from $4.50 to $8.50 per glass.

The majority of campus, while frustrated with the continual postponing of Dave’s, seemed to have been pleased with the end result. Director of Facilities Scott Bitikofer believes the Boathouse “is a special place that will serve Rollins students for decades to come.”

When asked about why exactly the pub’s projected end-date kept changing, Bitikofer responded, “I’ve heard it said that project management is like a three-legged stool—unfortunately more often than not you get two out of three, those being quality, cost, and schedule. That being said, it was a complicated project with many campus constituencies having input on the design of the project. Ultimately the project was late because the design was late, but in the end I think we got it right. It appears we got two out of three: quality and cost.”