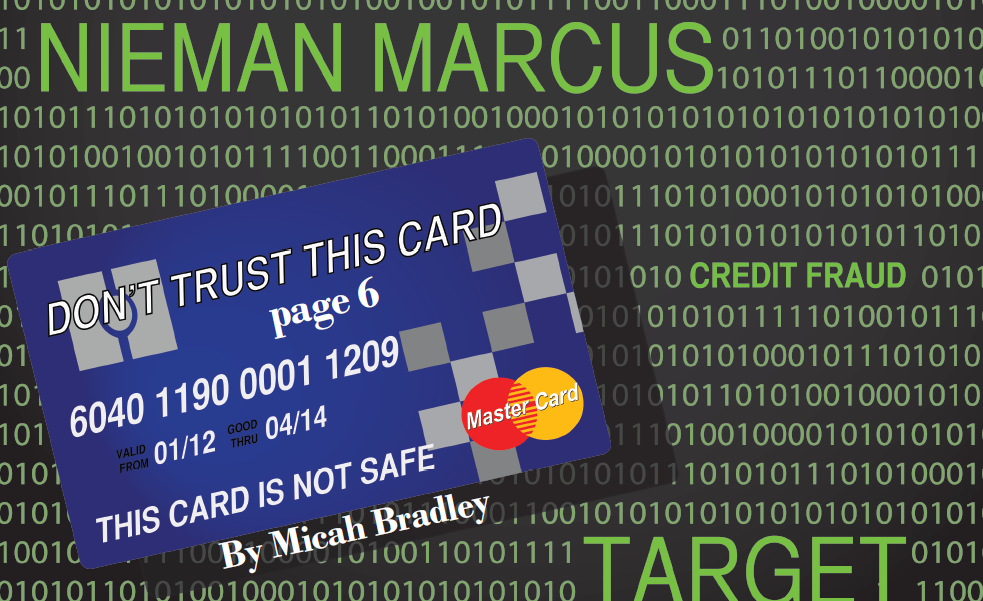 In light of Target’s breach in security, the reveal of personal information and possibility of credit card fraud is becoming more likely to occur.

The news has been rampant lately with stories of credit card fraud and compromised personal information. The recent wave of fraud started in December with the popular chain store Target. The company reported that between November 27 and December 13—which included the popular shopping holiday Black Friday and also a large portion of the holiday rush—customer information was compromised.

During the breach, personal information such as credit and debit card information, customer names, emails, addresses, and phone numbers were all compromised. It has been reported that over 100 million people might have been affected by the breach. However, the breach did not affect PIN numbers or social security numbers.

Target is anxious to win back the trust of its consumers; they have been offered one year of free credit monitoring for anyone whose data might have been affected, and they also offered two days of 10 percent off everything in the store as a form of apology. Catherine Kleindienst ’17, had information that might have been affected by the Target breach, though she never saw any suspicious charges on her card. Her bank took it seriously, and just to be safe, “They issued me a new one.”

Target is not alone. In a similar attack, Neiman Marcus stores have had over one million customers’ information compromised, but their breach went on much longer than Target’s. Neiman Marcus’s breach began in July and went undetected until January. The craft store Michael’s and several hotels have also recently reported possible breaches.

In a response to these issues of cyber security, executives from Neiman Marcus and Target spoke in front of Congress this week. They apologized to consumers and asked the government to increase cyber security laws. They also made some bleak statements.

Between the messages of the company executives and a Secret Service agent, it was made clear that American’s data is never completely safe. The hackers’ technology, and the number of hackers, is increasing faster than credit card technology is, making personal information vulnerable.

Many companies are unwilling to make the expensive shift to the new technology that would make customer’s data more secure. This new technology is already in use in several European countries and has greatly reduced instances of fraud.

The United States still generally relies on cards that use a magnetic strip instead of a microchip. However, by 2015 it is likely that most retailers will have updated their machines to read microchips, which is a more secure way of transmitting the data. PIN numbers may also eventually be required on most cards.

Most major credit card companies, like VISA and Mastercard, have issued statements to realtors stating that after the 2015 deadline they will be held financially responsible if customers are affected by a breach due to outdated technology. This new technology will not eliminate fraud but will certainly help in reducing it. Until the new technology is in place, it is hard for many retailers to guarantee the safety of their customer’s information.

In an age that is quickly becoming totally digital, making cash more and more obsolete, it is difficult to know how to avoid credit and debit card fraud. The most vital thing to remember is to be careful where you use your cards. Be careful making online purchases, and try to do so using Paypal or other reputable websites. Never give your credit card number or other personal information out, and be sure to sign the back of the card with ink.

When buying items in a store, make sure that your card is never taken out of your sight.  If in doubt, use cash. Jaime Pizzi ‘14 said this about keeping her information safe: “I never use the debit option when pumping gas, I always use credit because they cannot steal your info as easy that way. If I am buying something online from a site I am not familiar with I always use Paypal now. I also check my online checking account every day.”

Of course, it is important to check your accounts often. With online banking now widely available, it is easy to check your accounts weekly or even daily. Check for anything that you did not buy, even if it is only a few dollars. Often, thieves will test the card by making a few small purchases before trying to buy something bigger. Right now, a large scam that includes a $9.84 charge for “customer service” is affecting many people’s accounts. This type of scan preys on people who either do not check their accounts or do not check them in depth. In these cases, it is easy for a small charge to go unnoticed. Sometimes the bank will call to report suspicious charges, especially as fraud detecting technology increases. However, it can be dangerous to completely rely on the bank to determine the validity of charges. After credit card fraud has been determined, it is important to contact your bank.

Though there have recently been several instances of mass security breaches, the Secret Service insists that there are no more than would be expected in such a technological age.  Until the United States changes their credit and debit card security measures, American companies will continue to be the target of hackers worldwide.  The fact remains, when most records are kept digitally, it is difficult to guarantee their safety.