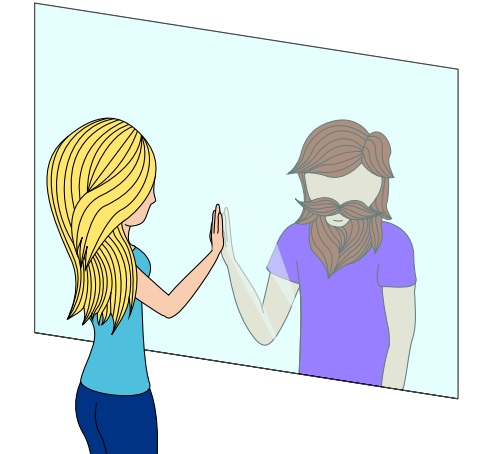 “Transgender. Trans-cender. Gender bender. Gender-blender…” These jumbled terms are some of the many terms Mark communicated through spoken word at an open meeting for Gender Rebel Group last Thursday.

He brought laughter, and sometimes provoked tears with his punching piques of peevery for people like him—transgender people. Mark’s presentation, however moving, was not really an open meeting.

I was one of many scattered and diverse audience members eager to listen to Mark. Yet, I had never had a sense of belonging to such a performance. I am usually an outside viewer in a chair below the ‘stage,’ not a part of the story.

Michelle Stecker, the director of the Lucy Cross Center for Women and Their Allies, warmly welcomed us to ‘TransFormations.’ ‘TransFormations’ is a one-actor show written and performed by Martie van der Voort that addresses several aspects in the life of a transgender person, a person in the process of transitioning, as well as the loved ones of someone who is transgendered or is undergoing that process.

It was constructed as a dynamic forum, in which every character shared their story at a usual weekly meetings. They grieved over the injustices they faced, the family they lost, the new friends they gained, and everything in between. The audience was welcomed to fully engage in these discussions.

First, we were introduced to Anita, a sex worker and transwoman. Anita is very spunky and holds an air of growing assurance that is easily admired partnered with her humor. Anita’s character addressed the perils of what it is like to be a transgendered sex worker. With there already being an apparent stigma placed over sex workers whose sex is synonymous with their gender, Anita’s story was that and more. The dangers of the job and the secret world of men who tapped into this world were uncommon to many of us. Her story shed light on many angles, not only her own, but for those who hid participation in acts such as sleeping with a “she-male” (as she jokingly referred to herself at one point, due to not yet having the ‘bottom’ surgery to remove her penis, but having the breasts and outward appearance of a woman). She described simply playing a girlfriend for some, generally older men, and having to deal with some discriminations and ridicule due to her body type in the industry that was classified as ‘fat,’ when in another light it would have been termed curvy or round. Anita was evidently just like many of us, only older and a sex worker.

Struggling with relationships was also something she faced; that aspect of a transgendered person’s life was strongly well portrayed in the story of Phil, who is in the process of transitioning from Leslie. Phil’s relationship is in a flux, as Voort quotes of her character, and he is also in therapy. Phil’s story addressed a disparity within the LGBTQ+ community, in that as Leslie she was a lesbian in a devout and long-term relationship. Leslie was a lesbian and her girlfriend, Beth, was a lesbian. But what happens when Leslie becomes Phil? Is Beth straight now and no longer a lesbian despite her firmness in stating so? The perils of their relationship straining their immense love for one another toppled with the soon-to-come questions and nagging of Phil’s parents. Mondays were filled with therapy of all kinds from couples therapy to therapy that almost seemed to result in nothing except incessantly writing letters.

Mark, our slam poet from earlier, is an activist with his words and transmasculinity. Betty is a transwoman who is undertaking the jeopardies of losing immediate family with her father not speaking to her and mother very slowly keeping in contact as long as dad does not know. However, she has a very accepting daughter who later came out as lesbian when away from home (they joked of going onto Jerry Springer as a “father”-daughter lesbian couple) and wife. Her father only being proud of her three times she recalls, and two of those being when she was married and had a child (as a man) before transitioning—which debunked dad’s initial doubts of a strange and gay son. Funny how this story worked out, dad.

There is also Marie, a trans-woman who lost her job in the army and family along with it, who started off very young cross-dressing, now maturing into the woman she is today and holding the role of an activist. Synonymous to Marie’s story, but on the other side, we had a wife dealing with her husband’s female to male transitioning who was trying to be accepting but felt alone and confused with her own sexuality at points because it was still the same man, the same high school sweetheart she fell in love with, but just a flirty woman now—right? There is also the son of a transfeminine father who was a part of the group battling with no longer having what he believed was a father figure to guide him or escape to when he wanted to get away from the women (mom and two sisters) in the house. Dad was physically gone from the house, and to him just plain gone. Richard is an older trans-man who ranted on the pain and hurt that boiled inside of him on Trans-Day of Remembrance (every November 20). Maurice was our failed drag queen, Dinah Lafta, and gay cross dresser who had an even harder time trying to find his place in the community he thought he could call home within the LGBTQ+. He just could not find his letter in the alphabet. And then there is Graciela, who led the group and was not transgender herself, but rather a mother of a transman and, in a sense, a mother to everyone in the group as well with her comforting anecdotes and tranquilizing, accented tone.

I address all of these characters presently as if they are real because their stories are just that. They are not fictitiously made up or aggrandized, but rather based off of truths and happenings that occur each and every day. Aside from Voort’s amazing distinction in both voice, accent, posture, and body language of each character, she made them all so individual in how the interacted with one another. The transitions were smooth, the scarves and purses or sweater changes quickly became just what they were while she was on stage, just accessories. There was no question to whom she was playing, or what role was being conveyed. Everything was done so accurately and smoothly that it has set a new bar for one-actor shows. The show also stood out simply because it did not stay central on one idea or issue that transgendered people may face; it was broad and did not just focus on transgendered people, but children, parents and partners. The show in its entirety was compelling and effective. Voort herself has been publicly performing since the age of seven and acting since age ten. For two years at Ohio University she furthered this palette and expanded more of the arts by focusing on music. Currently, “she acts in community theatre, film and video, and has written and is currently producing and performing,” inclusive of her original ‘TransFormations’ that premiered in the Winter Park Plaza.

The program was sponsored by the Lucy Cross Center; the Thomas P. Johnson Distinguished Visiting Scholar and Artist Program; Sexuality, Women’s and Gender Studies; PRISM; the Master’s in Mental Health Counseling Program; the Center for Inclusion and Campus Involvement; Spectrum; Equality Florida; The Center and the Zebra Coalition; and also thanks to Michael Farmer, who is the development director at Equality Florida.