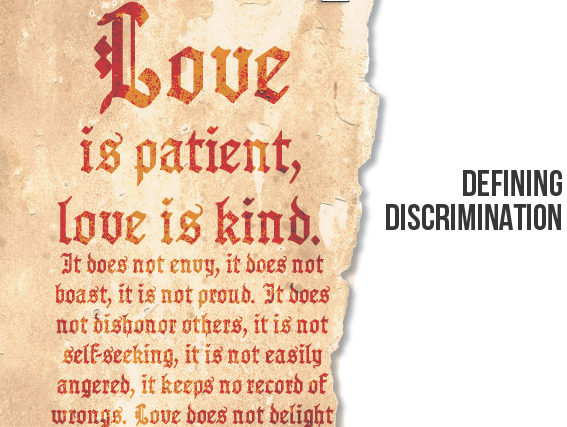 Two Sides of the Scripture

Baldwin and Loescher offer their perspectives on a campus controversy involving religion, discrimination, sexuality, and love.

[information]Read Scott Novak’s article to understand the reality behind the rumors that have been circulating around campus and the internet.[/information]

I am part of a minority. According to a compilation of statistics by the Kinsey Institute, 85% of American men have had sex for the first time before the age of 21. Nearing twenty-two, I’ve never had sex. As a high school athlete, I learned that to be “uninitiated” is to be in a position for unique forms of harassment. During my first year at Rollins, I was talking with a friend before her sex-ed presentation. As we talked, it came up that I was celibate. She looked surprised and asked if I “let off steam” in any way. When I said that I didn’t, she looked even more confused and asked if I was “okay.” I laughed and said yes.

When my friend asked if I was okay, she assumed that there was something wrong. She wasn’t being insulting. Her comment highlighted that our cultural norms are much different from how I live my life. So, why do I live this way? Why would I refuse the normative pleasures of our sexually active culture?

John 10:9-10 reads: “I am the door. If anyone enters by me, he will be saved and will go in and out and find pasture. The thief comes only to steal and kill and destroy. I came that they may have life and have it abundantly.” I have faith in a God who decided to restore our broken relationship when I was His enemy. On a cross, He died to take on my failures, then physically rose again as He finalized my pardon from punishment. This God, Jesus, claimed that he would restore our relationship, then fulfilled that claim. He also claims that he can give me an abundant life, only asking for obedience in return. According to His Word, remaining celibate, unless married (and that comes with several stipulations), is part of being obedient to Him: “If you love me, keep my commands” (Jn. 14:21). I am convinced that He made good on His promise through the cross; I have both confidence and experience in seeing Him make good on His other promises. Admittedly, there are moments when I want to follow my own desires rather than be obedient. Yet each day He gives me the strength to overcome myself and follow Him in an abundant.

Having held leadership positions in youth-based ministries for nearly ten years, I greatly appreciate healthy structures that hold me accountable for my beliefs and my integrity to them. The role of a Christian ministry leader is a serious one. The New Testament epistles consistently discuss the severity of leadership, listing many criteria for ministry leaders and noting God’s displeasure at a leader’s misrepresentation of His Word. This doesn’t mean that leaders should be demoted at every mistake; it means that they should always strive to emulate Jesus’ example. If a Christian ministry is to be based upon its authoritative texts, and is convicted of certain core doctrines, then its criteria of leadership is not in place solely for the organization, but for potential leaders as well.

I believe, along with InterVarsity and other evangelical students on campus, that being a ministry leader should not be contingent upon a specific sexual orientation. We don’t believe that LGBT students are second-class citizens. Jesus loved us all enough to endure the cross. However, we do affirm the authority that Scripture has in our consideration of sexuality, as well as the way in which we live according to our sexuality.
I understand, from my personal experiences, that this is a difficult path. Yet, I believe, and other InterVarsity students would agree, that Jesus is worth it. This article won’t address all of the questions you may have about faith, sexuality, and discrimination, but I hope it will begin meaningful conversations on these important issues. I invite you to ask questions of me, as well as my evangelical peers, about this “abundant life” and how we see that at work within the convictions we hold.

Love is patient, love is kind

The circumstances leading up to the expulsion of InterVarsity from Rollins have been variously described by college officials, InterVarsity representatives, and outside commentators – the last with plenty of opinions but little knowledge of the situation.

I am in a unique position to know the facts as I am the student at the center of the storm. I am a lifelong Christian who has been active in Bible study groups since my junior year in high school, and with InterVarsity since I arrived on campus in 2010. This past fall, I was recruited by InterVarsity to be a student leader of the organization. I was thrilled and honored, and put my heart and soul into motivating others to share my love and deepen our mutual understanding of the Bible.

I was utterly blindsided when I was called in to meet with the Intervarsity organization leaders and fired from my position because of my involvement in a same-sex relationship. When I was told I had no choice but to step down from my leadership position in InterVarsity, I knew it didn’t come from a place of hate, but it was also the most unloved, dejected, and alone I’ve ever felt.

An InterVarsity representative has suggested that I was not fit to hold a leadership position in the organization because I did not believe the Bible was pertinent to my decision-making. Nothing could be further from the truth. As a Christian, I believe in the authority of the Bible, which is why I also believe it is important to deepen my understanding of it. The point of Bible study is to examine, discuss, and sometimes challenge, the meaning of Bible verses, and that includes the handful of verses that reference homosexuality. To take those verses off the table, as InterVarsity essentially does by requiring its leaders to accept its interpretation of them, is to subvert the purpose of Bible study.

Any Bible scholar knows that Bible passages must be interpreted in the context of the historical period, origin of the language, and relation to other verses in the Bible. Were it not for evolving interpretations of the Bible, some would still be using it to justify slavery, just as they did in the 1800s, or to justify segregation and to prohibit interracial marriage, just as they did in the South as recently as 50 years ago.

After doing a lot of my own researching, praying, soul searching and contemplating, I have realized that this issue is much larger than me. This isn’t an issue of gay rights; it’s an issue of humanity. This is for everyone who has ever been told they couldn’t do something because of how they look, where they come from, what they believe, or who they love. Right now there is a boy or girl out there who has been marginalized as a result of discrimination, and I want to be that person’s voice. For every day that InterVarsity and similar organizations discriminate on the basis of their interpretation of “Christian values” or other subjective criteria, that is one more day that somebody goes home losing hope, feeling alienated, and shoving their Bible or their self-worthiness under the bed.

There are as many interpretations of Christian values as there are Christian religions, churches, and congregations throughout the world. I have come to believe that InterVarsity’s interpretation is narrow and exclusive. In my opinion, that is not what Christianity is all about. I believe Christianity centers on love, and as expressed in 1 Corinthian, love “always protects, always trusts, always hopes, always perseveres…Love never fails.” Call me crazy, but I can’t equate discrimination in any form with love.

I have never been prouder to be a Rollins student than I am today. Rollins is steadfast in its commitment to diversity and equality, and when challenged to step down, it only stood up taller.

Where do I hope we go from here? I’m for InterVarsity making its leadership positions open to all, including the LGBT community, and thereby regaining its status on campus. I‘m for that disenfranchised boy or girl out there having a voice. I’m for people being proud to call themselves Christian and have the freedom to be who they are and love who they want.

It is time for InterVarsity and similar organizations to heed the fundamental instruction of Christ: Love one another as yourself, and love God above all else. No caveats, no exceptions, no discrimination.