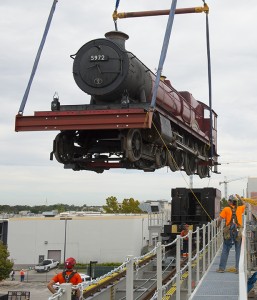 The Hogwarts Express has arrived at Universal Orlando Resort. Today, October, 24, 2013, Universal Orlando placed the iconic locomotive and train tender on the tracks between the two theme parks. Just like in the books and films Ð guests will be able to board the Hogwarts Express and travel between The Wizarding World of Harry Potter Ð Hogsmeade, which opened in June 2010 at Islands of Adventure, and ÔLondonÕ when The Wizarding World of Harry Potter Ð Diagon Alley opens at Universal Studios Florida next year.