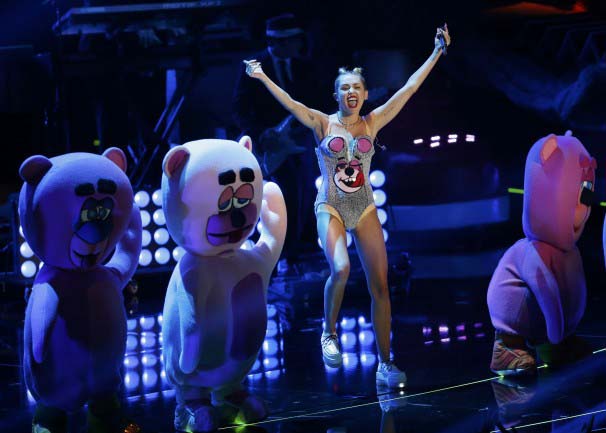 By Lauren Silvestri on September 5, 2013

As another summer comes to an end, another MTV Video Music Awards show passes by, along with its typical controversial moments. For those not familiar with this pop culture staple, the annual Video Music Awards (VMAs) mark a rare moment when MTV pretends that it still broadcasts music videos on its channel, and therefore can make educated and justified decisions on the quality of the year’s best music videos. Every year I watch it just to humor myself, while also secretly wishing some of MTV’s 80’s and early 90’s glory will return. Unfortunately, like every year, the show only slightly humored me.

The awards ceremony started with a performance from Lady Gaga, who after a hiatus due to an injury, has just released her new single “Applause” from her upcoming album Artpop. The performance showcased Gaga in all her eccentric and bizarre glory, and her intense, no lipsync-needed routine received a well-deserved round of applause. This year’s impressive line-up also included Kanye West, Katy Perry, Macklemore & Ryan Lewis, and Drake, but it was Justin Timberlake who stole the show. In honor of receiving the “Michael Jackson Video Vanguard” Award, Timberlake performed an extensive medley of some of his greatest hits, including songs from his humble ‘NSYNC beginnings. The other members of ‘NSYNC joined Timberlake on stage in a highly rumored and anticipated reunion, although the band’s stage time was relatively short compared to the rest of Timberlake’s performance.

But I can’t talk about the 2013 VMAs without at least mentioning the shocking and bewildering antics of Miley Cyrus’s performance with Robin Thicke for a medley of “We Can’t Stop”/”Blurred Lines.” I will spare you the details, as I assume you must have seen or at least heard of the freak show, and frankly I do not care to waste this article on Cyrus’ bizarre behavior. What I will say, though, is that Cyrus justifies her behavior based on how she has simply “grown up.” However, her use of teddy bears, foam fingers, twerking, and chronic tongue wagging contradict her claimed maturity.

Despite the raunchiness of Miley Cyrus, I felt that the VMAs were overall very “safe,” and have been for years. Its nominations featured predictable Top 40 artists such as Taylor Swift, Justin Timberlake, Selena Gomez, and One Direction. Only one category, “Best Rock Video”, included indie, folk, and hard rock artists, even though hundreds of those kinds of bands released music videos this year. I find it ironic that rock music now needs its own specialized category in order to be included in the nominations, when rock music was once the main music featured on MTV. The VMAs used to invite legendary, established artists such as David Bowie, Nirvana, Duran Duran, Rage Against The Machine, Red Hot Chili Peppers, Van Halen, Michael Jackson, Paul McCartney and even The Rolling Stones. The entire vibe of the VMAs used to be rock ‘n’ roll, from the attitudes to the fights to the unpredictability.

It’s difficult for the VMAs to uphold credibility when MTV never airs music videos or rarely any music-related material. The commercials in between the breaks feature the new shows MTV will be airing, including a third Teen Mom series and Big Tips Texas, which follows girls who work in a bikini bar and fight and party hard in their spare time. It’s sad that MTV, which was once a groundbreaking channel in terms of pop culture and music, and included such diverse programming as Yo! MTV Raps and Headbanger’s Ball, has come to this: a bunch of teen mothers and Miley Cyrus excessively touching her crotch.