After spending the first two weeks of their season on the road, the Rollins Volleyball team hosted their first home game in the Alfond Sports Center and came out on top against the Flagler College Saints. With the match ending 3—1, Rollins rallied back multiple times to earn the victory, with hitters Bri Civiero ‘18  and Shannon “The Canon” McDonough ‘18, shining, yet again, and adding on to their already high-hitting records.

Rollins Volleyball’s new head coach, Mika Robinson, has brought the Tars together extremely well so far. Coming from eight seasons at Berry College, Robinson has really focused on building a comfortable atmosphere and strong connection with the team. Volleyball is a sport that relies on communication; the team’s ability to constantly chatter throughout a volley usually results in how positive or negative the play turns out.

When asked about the new coach, players had great things to say. 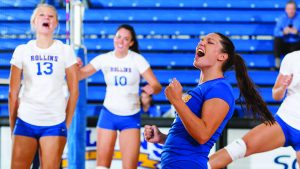 “Everyone has been really excited about what she is trying to accomplish and we are seeing results and progress already,” Civiero explained. “She is a great coach and we all see what great things she wants to do with the program so it is really easy to buy into everything she asks of us or tells us.”

The Tars’ ability to communicate with each other is what really sets them apart from other teams on the court. At times you could hear them louder than the crowd, and when Flagler’s coach called timeouts, Rollins went crazy. The Tars consistently took advantage of the time outs and breaks between sets to circle up and discuss the game and expectations of each other. Coach Robinson appeared to be doing an excellent job giving her players immediate feedback and adjustments which relayed into perfect rotational play and excitement within the team.

From the way the girls celebrated a point to the manner in which they met as a team, the Tars looked disciplined and attentive on their home court.

“Home games are so exciting!”  Civiero explained, “It is great to have our friends and peers show up to support us and seeing them get excited makes it that much easier to get the win and keep the energy we need to play constantly throughout the match.”

That energy definitely showed throughout the sets, and continued to build as the games went on. The first set started a bit slow for the Tars, but later, their offense dominated Flagler, earning them the win 25–19. The score of the second game was almost identical, winning 25—18 with dominating offense and a reliable defense to back it up.

The third game did not come as easily. As previously mentioned, communication is key, and that is what the Tars seemed to lack in this match. Flagler’s defense started reading Rollins’ offense more effectively, setting up for blocks and covering previous holes they left open. Losing this match 21 – 25, the Tars circled back up with their coach to figure out a way to win the next set.

The fourth set was when the match really picked up the pace and both teams’ competitive nature showed through. Movement across the court was rampant and although Rollins was attacking the ball hard, Flagler still found ways to recover the hits and send them back over. The consistent rallies kept both fan bases on their toes, and the Rollins crowd began to grow louder, proving the importance of home court advantage. The game was tied up until the 21st point, but the Rollins team stayed calm, collected, and focused. Flagler may have found a rhythm, but Rollins stole the last four points, winning with 25-21, and clenching a 3—1 win on their first home match.

The energy and commitment Rollins’ Girls Volleyball showed in their first home game is promising for the rest of their season. The girls seem to enjoy playing for their new coach and have come together immensely since last season to generate effective communication and mental toughness. Beating the Flagler College Saints was just a stepping stone to their ultimate goal of winning it all. Their next three matches include conference rivals Florida Teach, Embry Riddle, and Saint Leo. Good luck girls, and Go Tars!