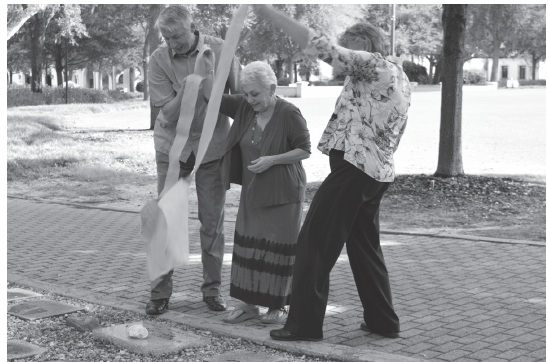 Rollins honored Pulitzer prize-winning author and Florida resident Marjorie Kinnan Rawlings (1896-1953) by installing her stone in the Walk of Fame, the first stone to be added in five years.

The Walk of Fame includes nearly 600 stones placed around Mills Lawn. It was originally established in 1929 by Hamilton Holt, Rollins’ eighth president. Each stone—an authentic relic from the life of the individual it represents—acknowledges influencers of world history.

The stone memorial for Rawlings is a limestone rock from her property at Cross Creek, Fla., which inspired her memoir “Cross Creek” and is now a state park.

Rawlings was born in Washington on Aug. 8, 1896 and graduated from the University of Wisconsin in 1918, where she studied English and submitted work to the yearbook and literary magazine.

However, after graduation, Rawlings struggled to sell her short stories and newspaper articles until a vacation to Florida in 1928 prompted her and her husband to move to Cross Creek.

Inspired by the lush nature of rural Florida, Rawlings published her best-selling, Pulitzer Prize-winning book, “The Yearling,” in 1938. In 1939, Rollins awarded her with an honorary degree, Doctor in Literature. She furthered her relationship with Rollins through its magazine.

Rawlings was a frequent contributor to Rollins’ Animated Magazine when Holt was president. She visited campus to deliver speeches in conjunction with the magazine several times.

Peg Cornwell, associate to the president for college and community relations, said Rawlings’ stone was “way too many years” overdue because of Rawling’s close relationship with Rollins and Holt, as well as her honorary degree.

Faith Artis (‘21) said she attended the ceremony because Rawlings is “a great influence on our generation,” and Artis had always wanted to see the Walk of Fame stone installation process.

Bet Taucher (‘20) said the ceremony was “a really cool opportunity because the last time they inserted a stone was in 2014, that was before even I was here.”

The 2014 installation honored the first African- American in major league baseball, Jackie Robinson. The stone was obtained from the Jackie Robinson Ballpark in Daytona Beach.

The Marjorie Kinnan Rawlings Society Board of Trustees was also involved in the ceremony.

The society’s executive director, Florence Turcottle, said Rawlings is “one of the quintessential authors that tells the story of the real Florida” through her descriptions of Florida’s natural landscapes.