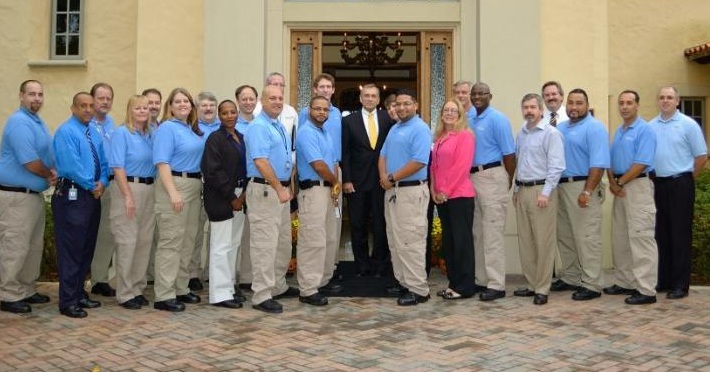 Many people at Rollins know Campus Safety officer Paul Leahey and his upbeat attitude. “Paul is one of those officers who truly looks out for the safety and well-being of Rollins students. He wouldn’t drive an hour to work each day to return home to his wife and family after midnight each night if he didn’t love Rollins,” commented Blake Pierce ’14.

Most would be surprised , then, to hear that Leahey was recently let go from his position at Rollins.  “When I heard Paul was let go, I couldn’t believe it. Paul is an asset to our Rollins Community,” Pierce said. Leahey’s departure raises questions about recent turnover of personnel within Campus safety as well as broader concerns about the safety climate at Rollins.

Leahey’s official reason for termination was for “writing substandard reports.” Leahey contends, however, that the reporting system was confusing and lacked features like spelling and grammar checks. He sees his termination as marking a shift from the friendly tone he tried to strike on campus to a more militaristic attitude expressed by some of his former co-workers. He charges that before going out on evening rounds, officers would ask each other, “Are you ready to go duck hunting?”

“I can say in my 30 years of working that I have never been so harassed or bullied,” Leahey said. “A comment was made to me that I need to be more militant and less friendly on campus, but why? I can maintain security needs and be friendly at the same time.”

When asked for comment on the tone of his department, Director of Campus Safety Ken Miller responded, “I would think that at times we can be fairly militaristic — more than half of our staff is either prior military or former law enforcement officers. The tactics and plans we use during emergencies and events come directly from FEMA and originated in the military… To members of our community that don’t have much contact with our office or what we do, we might come across as very militaristic. To a parent that is concerned about the safety and security of their student, we might not be militaristic or police-like enough.”

Officers within the department may be reluctant to stand up against these issues due to the fear of being fired — especially in tough economic times. Dawson Wright, former R-Card coordinator, shares Leahey’s concerns over the shifting culture in Campus Safety. Wright believes that the workplace environment in the Campus Safety office is “creating a culture such that good people want to leave.”

He also noted that it is not the campus security department as a whole that is causing these problems. There are just a few “bad apples,” he said. Both Wright and Leahey believe that the turnover rate within the department, especially among the second shift — when many of the most serious incidents occur — is unacceptably high.

When asked about the alleged high turnover rate, Miller answered, “When compared to other security groups, peers in higher education, and the Orlando market, we have an extremely low turnover rate.”

“We are very proud of our staff with respect to their relatively long tenure (average officer has been with us around 3-5 years), their desire to continue their education (multiple officers are pursuing either undergraduate or graduate degrees) and their ability to serve a diverse population (approximately half are at least bilingual).”

Having an approachable campus safety department is important for the Rollins community.  Student Blake Pierce ’14 suggests implementing campus security/staff evaluations similar (but much simpler and quicker) to those students do for their professors. “We interact with staff just as much as we do with professors,” he says. Leahey stresses that he is not in a pursuit to get his job back or harm others’ reputations, but he would be happier parting with Rollins knowing that changes are being made so that the employees of the campus security department and the students especially are treated with more respect.

On Tuesday, April 17th, from noon till 1:30pm, Pierce will set up a booth at the Campus Center to circulate a petition arguing that Rollins needs “a serious review of the management of the campus security department such that we are retaining well-qualified and personable officers. Campus safety is often the first face of Rollins to visitors and current students need to see the department not as a threat, but as a resource. To that end, the climate of the department must shift away from its militant culture.”