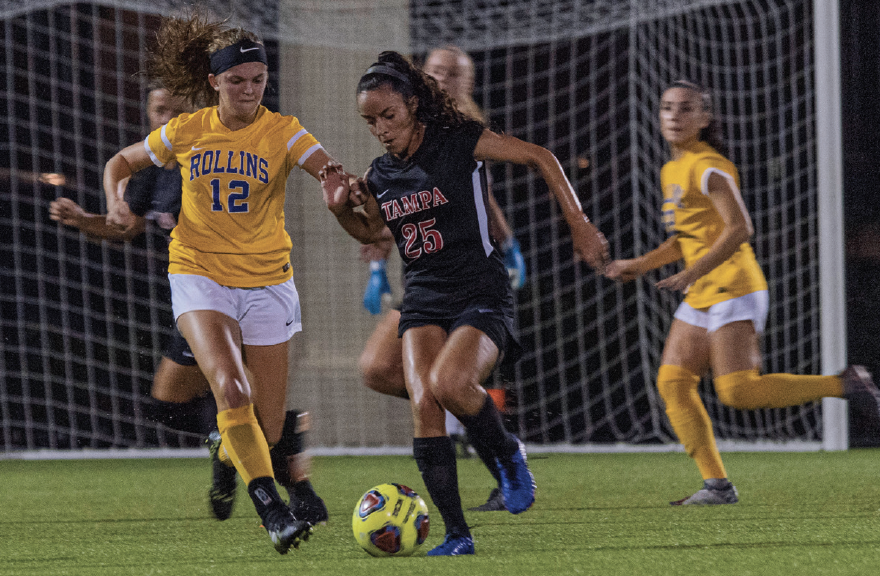 Amid wet conditions and frustrating refereeing, the Women’s Soccer Team secured a 2-1 victory against Tampa University at Rollins’ Barker Family Stadium. Goals by Kathryn O’Brien (‘20) and Bailey Tran (‘23) propelled the Tars to their eighth conference win of the season, an unprecedented achievement in the history of the program.

“We played really well in the first half, creating so many good looks. We probably should’ve scored a couple more. At half time we encouraged them to keep attacking, because that’s what we’re good at,” elaborated coach Alicia Schuck.

After conceding twice in the early stages of the game, the Spartans pulled one back before the break and kept the pressure on the Tars for the remainder of the game. At times, Rollins found itself on the backfoot in terms of being first to the ball or anticipating plays.

Sarah Buckley (‘19, ‘21 MBA) and Ally Rost (‘20) came off the bench to add stability to the gameplay, whereas goalkeeper Elena Beasley (‘23) and the entire backline made sure the score stayed unchanged.

“Whenever you’re up by one, it’s always a stressful thing because one bad call from the referee or one fluke and it’s a tied game,” said fullback Molly von Echenbach (‘21). “In those last 10 minutes, the only thing you’re thinking about is getting the ball the heck out of your half.”

Von Eschenbach gave a defensive performance for the books, committing decisive tackles, countless dispossessions, strong clearances, and winning aerial duels. Additionally, she provided the assist for Tran’s goal, although the freshman’s technique in executing the shot deserves a special mention.

Tran is enjoying a great start to her collegiate career. Having started all but one game this season, the Glen Allen, Virginia native has found the back of the net on four occasions this year, two of which proved to be game-winning strikes.

For O’Brien, this was her tenth goal of the season, making her the Tars’ top scorer and the second-best in the Sunshine State Conference. The senior is now among the top-five all-time scorers of the program, as well as seventh in career points.

As far as the record book is concerned, this entire team is coming for it all. In addition to the unprecedented 8-0 conference record, the Tars have already scored three more goals this season than in the entirety of last season.

Two years ago, this would have been unfathomable: “The seniors deserve a lot of recognition, but I always talk about the current juniors,” said Schuck. “They came in 2017 and didn’t win many games, and last year they tied some games that they could’ve won. So they went from losing, to tying, and now this year all those girls get to feel the wins.”

Under the guidance of the seniors O’Brien, Buckley, Ally Rost, Mariah Daly, Kelly Rowswell and Hannah Menard, all (‘20), this team has grown into a competitive and efficient side. Whether in terms of versatility or sheer character strength, the Tars are heading to great things.

“It just feels like we’re making history here,” said von Eschenbach. “Since the beginning, we’ve all felt like there’s something different about this season and it’s amazing being able to have the score and our record reflect that, and reflect the hard work that we’ve put in ever since.”

The Tars reported back on Aug. 1, and months of hard work have finally led to them ranking among the nation’s finest. Rollins is no. 9 in the country according to the latest United Soccer Coaches National Poll. Although this is a welcome addition to the conversation, Coach Schuck does not like to dwell on it: “This just goes to show that we have some special kids, and they aren’t just the oldest kids.”

Regardless of this development, the women’s soccer team has its sights on their further conference progress. Rollins hosts Barry University on Wednesday, with a win or draw securing the SSC regular season title for the first time since 2012.

That would give them the bye for the first round of the conference tournament, as well as a first place seed. For von Eschenbach, going into regionals undefeated would be a true statement of intent on behalf of the Tars.

But Schuck insisted that even if something goes wrong in the last two games of the season, their ambitions remain unchanged: “All in all, good performance. We’re in a good place moving forward and we’re happy with winning. Always!”