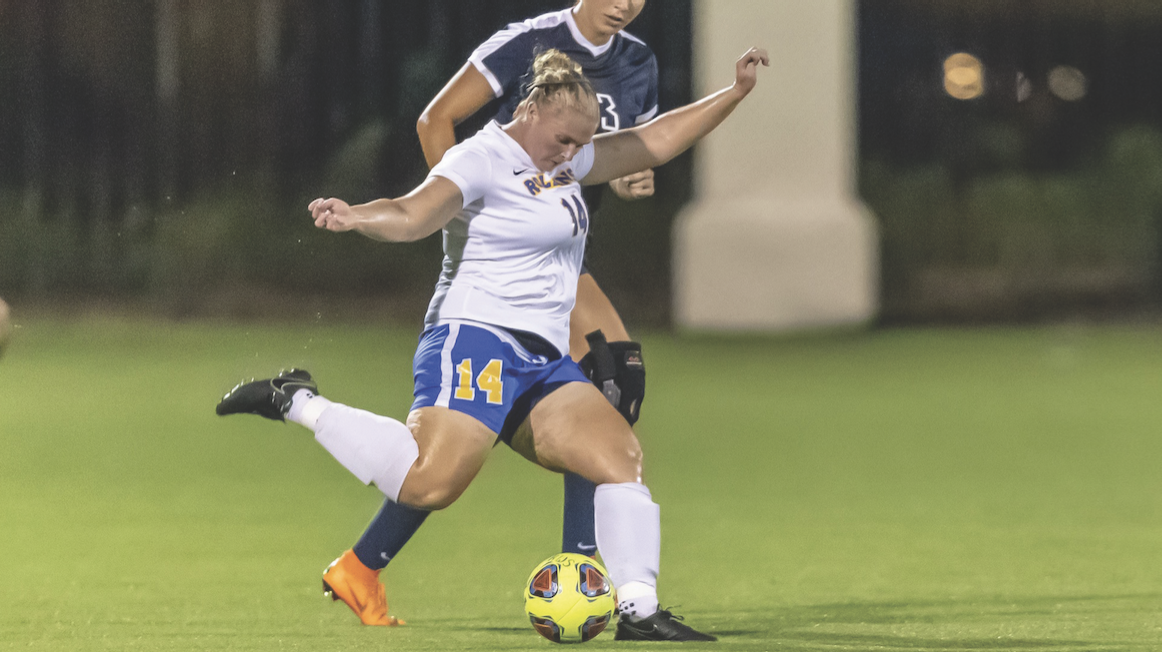 “We came out on a mission,” said Alicia Schuck, head coach of women’s soccer. The scoreboard behind her confirmed it: mission accomplished.

The women’s soccer team defeated reigning conference champion Nova Southeastern University 3-1 to grab the third win in four conference games in last Saturday’s game. After a slow start, Rollins managed to take the lead through a penalty scored by Jill Richards (‘19), but the show had just begun.

Less than five minutes after being subbed in, Sarah Buckley (‘20) exhibited a stroke of genius, as she dispossessed an opponent outside the box, turned around, and unleashed a shot into the top far corner. “With my team around me, I knew anything would have happened. We’re bound to get a goal,” Buckley said. “Worked hard, got the goal—it was a team effort, definitely.”

In the second half, Kathryn O’Brien (‘20) produced a vertical pass that Chynna McGirt (‘21) converted into a powerful, yet accurate shot to seal the game for the Tars. The duo had been a running riot throughout the match, switching positions and alternating movements to create all kinds of space. Despite a late goal by the guest team, a disciplined Rollins backline avoided any trouble up to the final whistle.

“We knew it was going to be a competitive game because they’re a good team,” coach Schuck evaluated. “I thought our kids executed our game plan exactly the way we wanted them to. [Nova has] a few special kids that come alive and I think we did a really good job to nullify those girls.”

This win means that the Tars are still undefeated at home, their only loss of the season coming in overtime against No. 6 Barry University in Miami Shores. The Tars have already scored triple the amount of goals they managed to get during the entirety of last season.

Coach Schuck said, “We attack now. We had a problem last season with scoring goals and I feel like now we’re just getting our fuel and our fire to keep chasing after games and keep winning by scoring lots of goals. Three goals against Nova, that’s hard to do, so it’s awesome to get it.”

Last season’s difficulties serve as extra motivation for Buckley. “Last year, our season didn’t go as well as we wanted it to and I think that brought us all together. It humbled us a little bit, so coming in this year, we all wanted something more,” Buckley said. Both Buckley and O’Brien, key performers this year, had to sit out last season due to injuries.

“It feels amazing [to be back]. Sitting on the sidelines is always tough, but it gave me a different outlook on being a soccer player, because I got to coach my teammates a little bit more and interact with them,” said O’Brien.

Buckley is on the same page as her teammate and said, “I missed just being out with the team. Just being able to kick a ball around makes me so happy, especially with this group. Everyday at practice, everyone is happy, in a good mood. Even though we’re serious, it’s still a great environment. I’m excited.”

Buckley has been a proven power-sub so far, scoring after coming off the bench on more than one occasion. “One of the things we do in this team is that you take your role and you just do it. I’m fine with it, helps the team and as long as we win, I don’t care if I’m playing 100 minutes or 0 minutes: as long as we win, I’m fine,” said Buckley.

Coach Schuck added, “We’ve asked them to score goals, and if they’re not scoring them, they’re creating them. That’s a big plus for us….The team is so experienced now. Last year, a ton of new kids got lots of minutes. They played in games like this. They were in moments where, maybe with our older roster, they wouldn’t be getting those experienced minutes. Our sophomores play like they’re juniors. Our juniors play like they’re seniors. And our seniors are like, ‘We got this!’”

Yesterday, the Tars traveled to the University of Tampa, who are still undefeated in conference. “It is important to us that we do well early. Especially when we’re on the road, we got to grind out results,” said Coach Schuck.