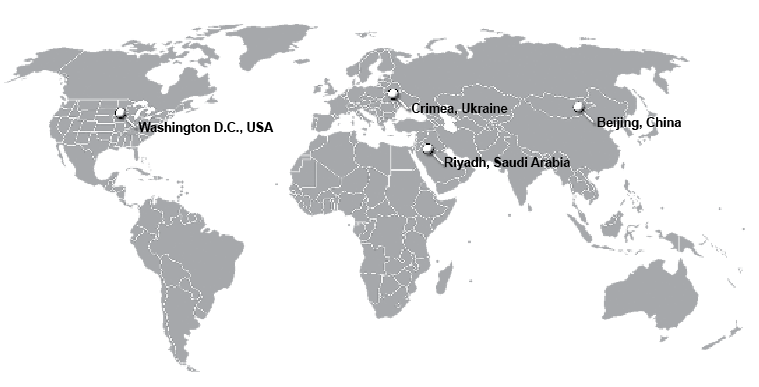 Crimea, Ukraine
Crimea, a semi-autonomous region that gained independence from the Soviet Union and became part of the Ukraine in 1991, is set to hold a referendum on March 16 to decide whether or not they will rejoin Russia. According to The Washington Post, Russia is eager to take back “its old imperial jewel.” Russian President Vladimir Putin has declared the new Ukrainian government fake and not capable of determining whether or not Crimea can choose which country it belongs to. However, according to USA Today, analysts believe the Crimean government to be false as members were not elected. President Obama recently announced sanctions on Russia for military involvement in Crimea that could result in the loss of billions.

Riyadh, Saudi Arabia
The Saudi Arabian government has formally labeled the Muslim Brotherhood a terrorist organization. The Islamic political organization, formed in the 1920s, was legalized in 2011 when Egyptian President Hosni Mubarak was overthrown.
In a statement from the Interior Ministry, the country also identified several other groups as terrorist organizations. This follows a declaration from Saudi’s King Abdullah which decrees up to 20 years of imprisonment for those found to be a part of a terrorist organization or fighting abroad, giving Saudis fighting with extremist groups in Syria fifteen days to return. The wider implications of the move are intended to be a message to Qatar, a nation that firmly supports the Muslim Brotherhood.

Washington D.C., USA
The U.S. Postal Service unveiled a new stamp at the Smithsonian Museum of American History featuring the “Star Spangled Banner.” The new stamp comes just months before the 200th anniversary of Fort McHenry withstanding bombardment from the British. It was during that time that young lawyer Francis Scott Key penned what would one day become the national anthem. The stamp features a photo of the fifteen stars, fifteen stripes flag flown over the Fort McHenry National Monument and Historic Shrine in Baltimore, Maryland, a replica of the flag that inspired the national anthem.

Beijing, China
China has announced plans to increase military spending by 12.7 percent to a total of nearly $132 billion. The increase comes at a time when the Asian nation is fighting for dominance in territorial disputes over land and sea with Japan, an important U.S. ally in the region. One area in particular causing dispute is a portion of the South China Sea, of which Beijing claims to own 90 percent, while the Philippines, Taiwan, Malaysia and Brunei also claim parts of the area believed to be rich in gas and oil. The heightened spending will go towards enhancing military technology, building new ships and submarines, and ramping up training. The Chinese defense budget is second only to the United States.