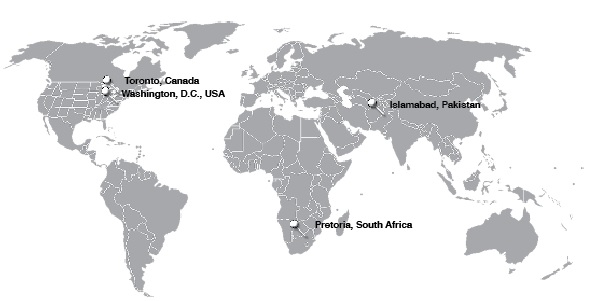 Pretoria, South Africa
Olympian and double amputee Oscar Pistorius was found guilty of culpable homicide and an unrelated gun charge on September 12 after a six month trial in South Africa. The gold medal winner was arrested after shooting his girlfriend, model and law graduate Reeva Steenkamp, through the bathroom door of his Pretoria home after mistaking her for an intruder on Valentine’s Day, 2013. Pistorius was the first double amputee athlete to compete in the Olympics. He will be sentenced on October 13.

Toronto, Canada
Rob Ford, mayor of Toronto, has withdrawn his candidacy for the October mayoral race after being diagnosed with abdominal cancer. The notorious public official was diagnosed after going to the doctor with complaints of abdominal pain. Ford’s name is to be replaced on the ballot by his brother, Doug Ford, to whom he is “passing the torch.” Although he admitted to smoking crack cocaine while in office, lost the majority of his mayoral powers and eventually did a stint in rehab, Ford still remains popular with many after he took away an unpopular vehicle tax and privatized trash collection.

Islamabad, Pakistan
Pakistani officials claim they have arrested the gang of Taliban militants who shot Malala Yousafzai in October 2012 over her and her family’s education activism. The officials say the group of nine was arrested before they could carry out their plans of killing an estimated 22 individuals and added that they would all be tried on terror charges. Malala nearly died after the shot to the head but recovered fully after being airlifted to the United Kingdom and went on to speak globally on issues of girls’ education and rights.

Washington, D.C., USA
The President addressed the nation on September 10, a day before the 13th anniversary of the 9/11 attacks, on American military action that will be taken along with our allies to “degrade and ultimately destroy the terrorist group known as ISIS” which currently controls large portions of Syria and Iraq. The plan the President laid out included the continuance of air strikes in Syria and Iraq, ground troops, increased counterterrorism measures and humanitarian aid to displaced, innocent civilians. According to the POTUS, “Abroad, American leadership is the one constant in an uncertain world.”