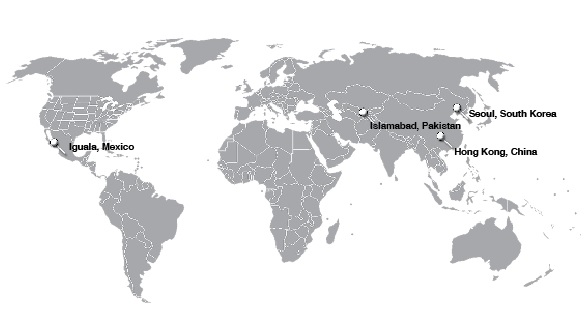 Hong Kong, China
Demonstrations continue on as thousands protest the current governance in Hong Kong. The masses flocking to the streets are protesting for a pro-democracy government. China blocked Hong Kong’s potential move to full democracy on August 31 of this year, sparking the protest movement. Talks were scheduled to take place between students and city officials but were interrupted by violence inflicted upon the protesters, included the dismantling of their tents and the physical assault of many. Amnesty International claimed that police looked on and did nothing as protesters were punched and kicked. A total of 19 arrests have so far been made.

Iguala, Mexico
A mass grave has been discovered near the town of Iguala in southern Mexico in the state of Guerrero. It was near this area that 43 students went missing on September 26 after travelling to the area to take part in a protest for teachers’ rights. 22 police officers are in custody after police opened fire on the student buses, killing six. The remaining survivors were then herded in police vans and have not been seen since. Authorities are currently trying to identify the bodies after an anonymous tip was called in to inform them of the location of the pit.

Islamabad, Pakistan
Pakistan has hit a record for polio cases that has not been seen since the 90s. A total of 202 new cases, most of them occurring in northwestern tribal areas, have been reported in 2014 so far. Militants in these areas have made it nearly impossible for medical personnel to vaccinate children as they claim they are spies and that many vaccine programs are actually part of a Western ploy to sterilize Muslims. Thanks to the World Health Organization, all Pakistanis must carry and provide proof of vaccination before travelling abroad. Polio is currently only a pandemic in Pakistan, Nigeria, and Afghanistan.

Seoul, South Korea
During a surprise visit to South Korea to view the closing ceremony of the Asian games, North Korea’s top political officer Hwang Pyong-so, along with other top ranking officials from the nation, agreed to resume formal talks that had been suspended in February. It is unknown what was said specifically, and neither side has chosen to comment on the matter, but it comes at an odd time for North Korea after their leader, Kim Jong-Un, has missed several public appearances due to “discomfort,” which some have translated to be a myriad of illnesses.