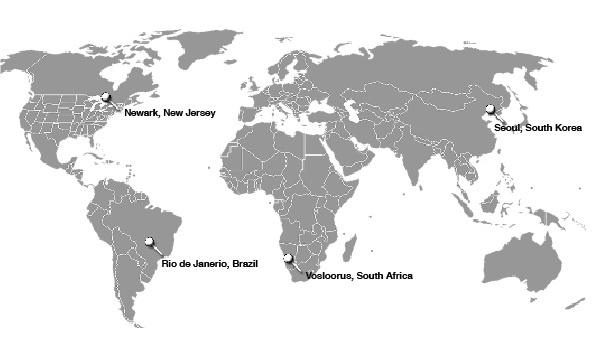 Vosloorus, South Africa
South African Football Captain Senzo Meyiwa has died after being shot during a robbery. The national sports hero was visiting his girlfriend in Vosloorus, just south of Johannesburg, when two armed men entered her house and demanded their valuables. Police believe that Meyiwa may have been trying to defend his girlfriend when he was shot. He was goalkeeper for the South African team the Orlando Pirates and played for his country in the last four Africa Cup of Nations qualifiers. The police are currently searching for the men responsible for the murder, but have not yet identified them.

Rio de Janeiro, Brazil
President Dilma Rousseff has been reelected as the head of the Brazilian government with one of the smallest margins in the country’s election history. She promises to be “a better president” and focus on promoting national unity. President Rousseff founds voting strongholds in the poor north and northeast, areas that benefit greatly from federal aid and development projects. One consistent aim of her presidency and campaign has been to decrease the gap between the rich and the poor which has, more often than not, been difficult because of high levels of corruption and increasingly poor economy.

Newark, New Jersey, USA
A nurse who was quarantined upon arrival to the United States after treating Ebola patients in Sierra Leone has been released. Kaci Hickox, 33, was placed in quarantine after a forehead scanner showed that she had a fever of 101. She protested her quarantine after an oral reading came up at 98.6, arguing that her originally spiked temperature had been a result of distress. Governor Chris Christie refused to apologize for the protocol, saying that “if they are symptomatic, they are going to the hospital.” Christie maintains that strict standards are vital for preventing any further spread of the disease within the US, while New York governor Andrew Cuomo relaxed standards for his own state.

Seoul, South Korea
Prosecutors are seeking the death penalty for the captain of the ferry boat that capsized in April earlier this year, killing over 300 passengers. They argue that the captain has shown no repentance and has repeatedly made excuses and lied about what happened that day. Survivors of the wreck say that they were actually told to stay put on the ferry even after it had begun to capsize. The tragedy was a result of multiple factors, including an experienced crew, illegal designs and excessive cargo. No one has been executed in South Korea since 1997.