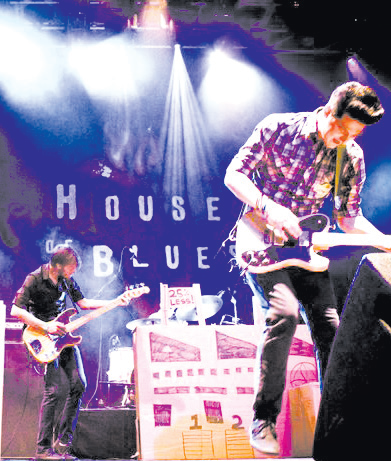 On April 16, 91.5 WPRK hosted its second WPRK Comes Alive! event at House of Blues in Orlando.

In these trying times when Rollins is cutting the budgets of media outlets, WPRK is taking the initiative to raise money to continue entertaining the Rollins and Orlando communities.

Featured artists included The Pauses, Andy Matchett & The Minks, Potsie and The Darling Cavaliers. These four bands represent the finest display of indie rock at the moment in Orlando and all have just produced brand new albums. They are currently in heavy rotation on WPRK and an audience got to hear them play live at the House of Blues.

The artists did not disappoint. Each band delivered a different sound while complementing each other and creating a great vibe.The Darling Cavaliers opened and had a strong country influence. Potsie followed with the hardest sound of the night, which was refreshing to hear. Andy Matchett & The Minks entertained the audience with great music, a parachute and a dog-operated robot. The Pauses ended the night and ensured awesome show.

WPRK’s promotions director and main organizer of the event, Holt student Rob Soviero, was more than satisfied with the event. “The show was a success. About 1,000 people showed up to see the most popular local bands,” he said. “We’re glad our loyal listeners got the chance to see these artists ‘Come Alive’ instead of just hearing their music on the radio. Venues like the House of Blues, and more recently Hard Rock Live, have become great sponsors for us because they also give us the opportunity to raise money for WPRK, with hosting events like WPRK 91.5 Comes Alive.”

WPRK keeps its listeners its prime priority, as they are the ones keeping the station alive. It constantly wants to prove its title as “the best in basement radio.”