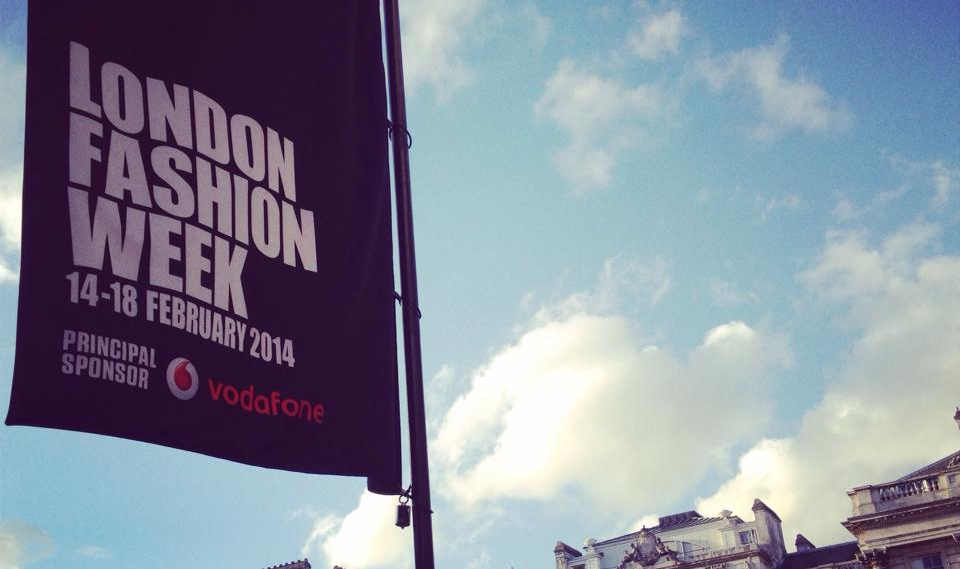 This past weekend Sandspur reporter Kait Alkass ’15 had the opportunity to fulfill her dream: attend London Fashion Week. As an accredited broadcaster for Licklemor Productions while studying abroad in London, she had access to catwalk shows and designer showrooms. Here is a quick peek at her adventures as a member of the press.

At the hub of fashion week was Somerset House, about a five minute walk from the Thames, Big Ben, and the Eye. I could practically feel the energy bouncing off the walls as I stopped to put on heels before entering. (Fun fact: walking in heels on cobblestone roads all day is as painful as it sounds.)

A broad range of styles were showcased by bloggers and guests alike: some went with a classic look, sporting Burberry trench coats, black cigarette pants, and pumps. Two posh Italian women wore shag fur shrugs in emerald and fuschia, completing their ensembles with thigh-high leather boots. They looked as if they had stepped out of the pages of Vogue; photographers were hovering over them like flies.

That leads to the first thing I learned about London Fashion Week: either dress ridiculously expensive or like a creature from an acid trip gone awry and photographers will be tailing you as if you are some rare species of flightless bird. They were even taking photos of me, which were then put on display in the Samsung Galaxy Media Lounge (and then off to be shown on a ‘what not to wear’ list I’m sure, as I was sporting green pants from Target).

While dressing head to toe in designer outfits worth the price of a small car is good fun for those who can afford it, others took full poetic license and wore outfits of a more psychedelic persuasion.  Think neon funky print dresses with a shaggy red coat, platform shoes, and a blue plastic backpack.

I interviewed a student of fashion design from Cornwall who had made her outfit: she modeled a white skirt which had several pastel colored poms attached to it, a coat that resembled a sheep which had been submerged in yellow dye, and lavender Mary Jane’s which were the exact same shade as her hair.

I was taken aback by how friendly everyone was when I approached them and asked for an interview. I suspect this was due to the fact that they were not entirely sure if I was important or not and were playing it safe rather than insulting someone who could destroy their career. It is amazing how much power one can assume when wielding a microphone.

In between my raids of instilling fear in the hearts of the British fashion elite, I attended catwalk shows. It was quite the adrenaline rush presenting my press pass to the security guards and skipping the lines. I was then escorted to the section for the press, a series of glorified bleachers which smelled of BO. I relished being shoved by other photographers who were vying for the best shot of the runway, inhaling what I believed to be the scent of success.

Runway shows are a concentrated microcosm of adrenaline, teeming with enough energy to split an atom. The models look gloriously inhuman, staring into the cameras with a hint of a smile. I secretly hoped to get an interview with one and ask her what she had eaten that day.

Of the shows I attended, my favorites were John Rocha and Vivienne Westwood.  John Rocha had the most fantastical designs, his collection consisting mostly of jewel toned satin dresses with exaggerated ruffles and layers.

Vivienne Westwood was by far the most high-profile show, with Paloma Smith and singer Jessie J in attendance. Westwood’s collection was classic with a contemporary edge: red plaid pantsuits were followed by leather skirts with tights embellished with triangles. Grey overcoats with lapels that closed to form giant hearts paired with high-waisted trousers were also a staple.

My time at London fashion week provided a tiny glimpse into a world that I had previously only read about or seen in films (read: The Devil Wears Prada). I can only hope that my future will continue to be filled with more catwalks and men wearing heels.

To see video footage of the event, go to whatsuptv.co.uk.