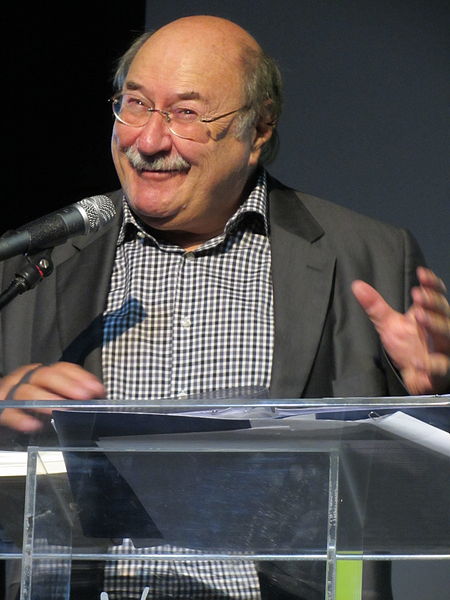 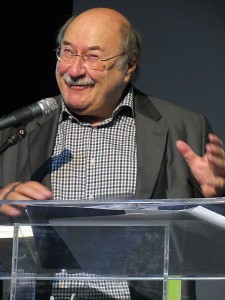 Winter With the Writers began with a fantastic visit from Chilean author, screenwriter, and playwright Antonio Skármeta, whose willingness to dedicate so much of his time and enthusiasm to our college was truly humbling.

The interns’ first experience with him was a private workshop in which myself and four other interns (Lindsay Granduke ‘16HH, Luis Guerrero ‘18, Lara López-Lueje ‘19, and Jennifer Valero ‘17)

discussed our English-translated copies of his originally Spanish songs (which can be viewed on the Winter With the Writers website).

In this session, we were immediately introduced to his bountiful energy and contagious humor. What ensued was an enlightening conversation about the intricacies of beat and rhythm in his writing and the importance of not sacrificing a specific “feel” or “sound” in the process of translation.

Later that same night, we attended the screening of Chilean filmmaker Pablo Larrain’s Oscar-nominated film NO! based on Skármeta’s play The Referendum.

The event provided an opportunity for everyone in attendance to interact with Skármeta until doors for the film opened.

Then, we all packed into the theater and enjoyed a dramatic re-telling of Chile’s utterly surreal 1988 plebiscite, in which the country was given the democratic choice to vote “yes” or “no” to brutal dictator General Augusto Pinochet.

Following the screening, a brief Q&A session was held, and special, never-before-seen footage of A Movie Life, Brazilian actor/director Selton Mello’s adaptation of Skármeta’s most recent novel A Distant Father, was shown.

At 4:30 p.m. on the final day of his visit, Skármeta treated the audience in Bush Auditorium to a one-man reading of his play, the aforementioned Referendum, source of both NO! and Skármeta’s novel The Days of the Rainbow.
The roughly 45-minute presentation included enthralling back and forth dialogue, rich with humor and irony, as well as real clips of the “no” side’s advertising campaign from the 1988 vote.
Skármeta returned to Bush later in the evening to read from A Distant Father, an experience that produced laughter, cheerful gasps of disbelief, and a standing ovation upon its conclusion.
Afterwards, Winter With the Writers director and English professor Carol Frost sat down with Skármeta for an on-stage interview, reading questions posed by audience members. His same brand of whimsicality shone through, along with his intense love of writing and music.

Soon after, Skármeta was set up at a table, graciously signing copies of his books and bidding farewell to those in attendance. His smile, even after such a long day and week, was infectious.

All in all, the experience was something I will remember for the rest of my life, and I know the same goes for my fellow interns.

Skármeta’s passion and love for his writing was clear from the very first moment that we met him. His kindness and humility are truly something to be admired. On behalf of all the WWW Interns and Rollins College as a whole, a sincere “thank you” and “please, please come again someday” is more than deserved.

The end of the first week of Winter With the Writers was somewhat bittersweet, like turning the last page of Skármeta’s Distant Father, or Days of The Rainbow, or The Postman. As hectic, exhausting, and memorable as it was, the crazy part is that this was only the first week. There is still so much more left to come for us interns.

On Thursday, Feb. 11, Rollins’ own Dr. Phil Deaver and his works Silent Retreats and the very recently published Forty Martyrs will be celebrated. There will be a reading at 7:30 p.m., with a Master Class at 4:00 p.m.

You can visit the Winter With the Writers website for more information and to view the works of students to be workshopped on stage with award-winning writer Brian Turner.