Around London in eight days

Mind the gap. Actually, just mind London in general. Unless, of course, you have slowly been gaining study abroad experience like we have and are totally ready to tackle London head-on (not really, but, we tried). So, what exactly is up with London? We’ve heard about this city all our lives. It’s written on all sorts of clothing items and used by stores who want to prove their clothes are “fashionable.” It’s the setting of countless novels, plays, and poems. It’s the city that is featured in so many movies and TV shows—James Bond, Notting Hill, and Harry Potter being among our favorites. So, when faced with one of the biggest and most touristy cities on the earth and exactly eight days to explore it, where do you start? How do you handle the insanity of this city? 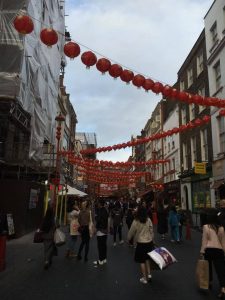 We started by getting off a train from Lancaster and taking the tube (with some helpful instructions from a janitor) to our hotel in Kensington. It was mostly uneventful, though it only took a few blocks of toting our over-packed suitcases and Micah’s stuffed animal friends to realize that we should have packed lighter. When we got to the hotel, we met up with Micah’s mother (affectionately referred to as Momma Bradley), who flew over from the States to spend the week with us. We then had the daunting task of figuring out what we were supposed to do with one jet-lagged American, two naive students, and eight days in London.

We started by visiting Kensington Palace, the London Museum, and the London Wall. Unfortunately, during this time, Micah had to take her LSAT at a very swanky place named Ironmonger’s Hall.

Fun Fact: Did you know that they don’t sell number two pencils in the UK?

We also hit up Buckingham Palace, Parliament and Big Ben, Westminster Abbey, Shrek’s Adventure—all the quality tourist stops. Later in the week, we stopped by Platform 9 & 3/4 in King’s Cross Station to see the shopping cart statue and stroll through the Harry Potter gift shop, producing one of our favorite sets of pictures from the trip thus far. We also saw Macbeth and Imogen performed at The Globe, home of another quality gift shop, and then Les Miserables at The Queen’s Theatre. Some of us shed may or may not have shed a tear or two at the end of that performance.

We only left the city and its suburbs once during the week, and it was definitely worth it. We took a day trip starting at Leeds Castle, which, to our surprise, is not in Leeds. Our tour continued with a brief stop to see the Cliffs of Dover (and pick up a couple of souvenir rocks), and ended in Canterbury, where we explored the Canterbury Cathedral.

Fun Fact: the cathedrals in England are huge and very pretty, even when the medieval art (and Saint Beckett’s preserved finger) creeps you out a little bit. 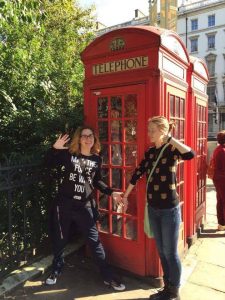 Besides all of that, we did several museums, walked through neighborhoods and parks, took other tours, and visited many famous landmarks. So, what exactly did we learn from our whirlwind trip to the busiest city on the planet? The main thing we learned was not to stress. It’s literally impossible to do all of London and take everyone’s travel recommendations in eight days. You couldn’t even walk through the Victoria and Albert Museum in eight days. Even though everything was overwhelming, we learned that the best way to handle it was to take a deep breath, smile, and go for an adventure—even if it wasn’t exactly the adventure we had planned.

Our trip to London was quite the adventure, and we’re both exhausted after our week of exploration. Fortunately, we still have one more week before classes start, and we’re hoping that should give us enough time to rest up. Apparently we have yet another welcome week in Lancaster. Something called Fresher’s Week?