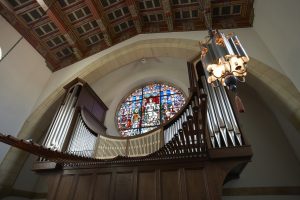 The Protestant Reformation shaped the course of Western civilization, adding a humanist angle to our way of thinking and prompting a critical look at our priorities and values. With the chokehold of the Roman Catholic Church, the potential of the individual was slowly given front seat. It has been 500 years since the great Lutheran revolution, and last weekend the Bach Festival Society of Winter Park celebrated this momentous era in history with flair.

A Lutheran, J. S. Bach followed Martin Luther’s theology and knew his hymns, among which was “A Mighty Fortress is our God.” Composed by Luther, the chorale was the recurring theme of the concert on Sunday afternoon at Knowles Memorial Chapel; it forms the basis of Bach’s Cantata BWV 80 and Felix Mendelssohn’s Symphony No. 5, “Reformation,” the two heavyweights of the program.

Under the sure-footed direction of Artistic Director and Conductor Dr. John Sinclair, the 160-piece Bach Festival Choir was in top shape. The staggered entrance of the canonic treatment that opens BWV 80 was polished and balanced. Sinclair also brought out the best sound of the orchestra, symmetrical and resolute, in the imperfect acoustics of the chapel.

Soprano Mary Wilson showed a cultivated head voice, with a full and mature tone in her forte high register. Tenor John Grau sang with a high-pitched liquid tone, though he tended to get dimmed by the orchestra. His particularly high tone blended well with mezzo-soprano Meg Bragle in their duet; their joined voices held their own against the orchestral accompaniment.

Bach’s shorter cantata BWV 79, composed for Reformation Day, featured a delicate oboe by Sherwood Hawkins in the second movement aria, “God is our sun and shield.” Bragle brandished a strong tone during this compelling duet for mezzo and oboe, but added little ornamentation to her phrasing. Seraphic horns decorated the third movement, with interjections from the full chorus. Like the tenor and mezzo duet from BWV 80, the baritone and soprano duet from BWV 79, “God, ah God, abandon Your own ones never again,” was a highlight. Baritone Juantomas Martinez boasted an assured and tuneful voice, radiating together with Wilson over pristine strings in unison.

A newly converted Lutheran in his time, Mendelsohn honored the 300th anniversary of the Augsburg Confession—the primary confession of 1530 of the Lutheran churches—with his fifth symphony, first performed in Berlin in 1832. Before the performance of the symphony, and of Bach’s BWV 80, Sinclair invited the audience to join the commemoration by singing “A Mighty Fortress is our God,” printed in the hymnals distributed around the pews at Knowles.

The performance of the “Reformation”  symphony was poignant. Sinclair took the opening movement at a solemn walking pace, ushering in a mellifluous blend of brass and strings. Subtle crescendos animated the score and gave it vitality. Over the development of the long first movement, Sinclair handled contrasting sections effectively, shaping phrases into well-rounded statements, capped by strong tuttis, when the entire orchestra plays, and timpani rolls. There was sublime flute work, led by the talented Nora Lee Garcia, and a robust cello section. After contrasting tempi and various moods, the performance climaxed in the finale with a restatement of the Luther chorale, played in an exuberant and triumphant fashion.

Beyond some of the best choral and orchestral work the Bach Festival of Winter Park has offered yet, the “Reformation” concert was more than just good music; by celebrating Luther’s consequential reevaluation of the role of the Roman Catholic Church, it served as a reminder that reasonable defiance of authority is always healthy and necessary to keep in check the powers that be.

To learn more about the Bach Festival, visit bachfestivalflorida.org. Rollins students, faculty, and staff are welcome to come to concerts for free with their Rollins ID.