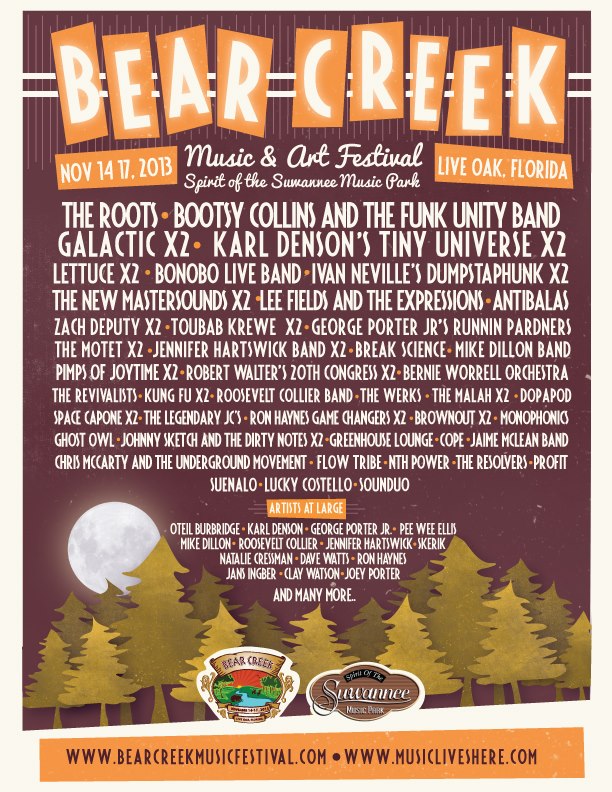 Furry freaks, prepare to reunite, for our favorite annual Bear Creek bash is merely hours away. Frankly, we haven’t quite unpacked yet from Hulaween, so we’re already one foot out the door and on the way back up to Spirit of the Suwannee Music Park for more Live Oak rage with our favorite Florida fest fam. Here are five musical excuses we’re using as our alibi to get back to the funkiest forest around this weekend.

1.  Bonobo Live Band
Simon Green AKA Bonobo has been transcending listeners with his unique dimension of phonic ecstasy since the release of his first album, Animal Magic, in 2000. The UK-based producer has experimented with his own fusion of jazz, psychedelic rock, funk, hip-hop and electronica, as well as culturally stimulating melodies from across the globe, allowing him to become one of the world’s most prominent producers. Green’s groundbreaking melodic methods have most recently been compiled in his latest album, The North Borders. His highly textured music will truly shine with the support of a live band this time around; a performance sure to dazzle the minds of many on Friday night at the Amphitheatre Stage.

2.  Bootsy Collins and the Funk Unity Band
We’re certain Bear Creek could not be happier to host one of the true godfathers of funk, Bootsy Collins. Throughout the span of his unmatched career, Collins has played with some of the most accomplished funk greats of all time. Gaining initial popularity while playing with James Brown, Collins was ultimately inducted into the Rock n’ Roll Hall of Fame with the 15 other members of Parliament Funkadelic. Bootsy, along with the support of his Funk Unity Band, will most definitely funkify the souls of thousands with his booty-quaking space bass.

3.  Lettuce
No strangers to Suwannee, Lettuce will be gracing Bear Creek with two highly anticipated sets. On Saturday night, the boys will team up with Dumpstaphunk and special guests for the Bear Creek All Stars late-night set. The band will also be closing out the festival with a final rage at the Amphitheater Stage Sunday night. Lettuce is a true staple at Bear Creek, and there is no place to witness this progressive funk ensemble full-force besides Suwannee. Time and time again, Lettuce has brought the thunder to Bear Creek, and if history has taught us anything, Bear Creekers will be in for quite a treat.

4.  Galactic
Few bands out there are able to bring the ferocious NOLA funk with the same intensity as Galactic. Known as one of the truest New Orleans funk bands, Galactic will be sure to bring its spin of New Orleans to the Florida fiesta. With a history of hosting some of the festival’s most memorable sit-ins, Galactic’s two sets will certainly be among the must-sees of the weekend.

5.  Ghost Owl
If you are new to Ghost Owl, you have been missing out. Featuring three of the original members of the celebrated southern jam band, Perpetual Groove, Ghost Owl embraces an old-school synergistic playing style, while pushing the envelope on melodic exploration. The band’s genre incorporation spans across the musical spectrum, fusing aspects of progressive rock, jazz fusion, rock n’ roll, indie rock and electronic to manifest an awe-inspiring dance party. This past September, the band performed at Catskill Chill Music Festival, and provided one of the best sets of the weekend. and have since been working hard in the studio. GO’s Saturday evening timeslot in the Music Hall is set to be a massive throwdown of epic proportions.

Tickets are still up for grabs for this weekend’s annual Bear Creek Music & Arts Festival, taking place at Spirit of the Suwannee Music Park in Live Oak, Florida from Wednesday, November 13 through Sunday, November 17, 2013. Don’t miss out! Click here for more on Florida’s famed funk soiree.

Read this and more of Jonny’s work at Melodysiac.com.