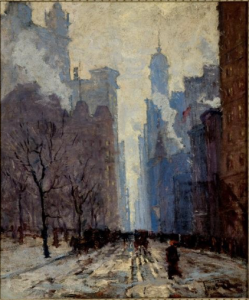 Dr. Amy Galpin, Curator at the Cornell Fine Arts Museum, offered The Sandspur insight into one of CFAM’s two upcoming exhibitions for the Fall 2016 season: “This Side of Modernism: Twentieth-Century American and British Artists.”

Sandspur: Dr. Galpin, give us some of your background in art history education.

Galpin: During my undergraduate education, I took a couple of art history classes and my major was Radio-TV-Film—in particular, a class on Latin American film was inspiring. I received a M.A. in Latin American Studies from San Diego State University and a Ph.D. in Art History from the University of Illinois-Chicago.

S: How would you define modern art, in particular American and British?

G: Modern art is often avant-garde work created after 1880. The artists included in this exhibition were influenced by Impressionism, Post-Impressionism, and chose a more representational framework. Many of the American artists in the exhibition focused on American subject matter—a choice that differed from some of their predecessors who focused on European subjects. In terms of the British arts, many were interested in surprising and bold color choices and distinctive patterns.

S: Why have you decided to curate these works this season?

G: One of the aspects of CFAM’s permanent collection that sets it apart from other museum collections in Florida, and in the U.S. for that matter, is its Bloomsbury holdings. I’ve had this show on my mind for some time, as I wanted to present many of the museum’s Bloomsbury pictures in a new light. The Bloomsbury Group artists were a group of important British writers and visual artists [who] ushered in modernism in England. [These artists worked] in and around London [and] in concert with artists active in the U.S. during the early twentieth century. I consider how often work has been on view, and I also think about what has and hasn’t been shown. Works on paper can only be on view for so long. They need to be rotated. It was time to bring out our Bloomsbury pictures.

S: If you could choose only one work in this exhibit for visitors to come and appreciate, what would you recommend and why?

G: Roger Eliot Fry, Study of Vanessa Bell Reading. The artist’s choice of color in this work is extraordinary: it draws you in and demonstrates the Bloomsbury Group’s interest in bold and surprising hues. Here, Fry depicts a prominent painter, Vanessa Bell, also the writer Virginia Woolf’s sister. One of the most striking aspects of this work is that it remains unfinished; the work gives us the impression of the artist’s process.

S: Can you reveal any plans you have for the upcoming spring exhibitions?

G: Our three exhibitions opening in January are extraordinary! “Black Figure in the European Imaginary,” curated by Professor Susan Libby and Adrienne Childs, will be a terrific presentation of nineteenth-century paintings from across the country. Professor Libby and some of her students are curating “Reframing the Picture, Reclaiming the Past,” that will serve as a contemporary companion to “Black Figure.” We are also incredibly proud to open in January “AfroFantastic: Black Imagination and Agency in the American Experience,” curated by Professor Julian Chambliss and his RCC students, [to] include works from our collections, loans from artists, and a listening station with related content.

“This Side of Modernism” and its companion exhibit, “In the Light of Naples: The Art of Francesco de Mura,” will open for general viewing next Monday, September 17, 2016. Appreciate a mix of Cornell’s own private collection of modernist art and the traveling collection of works by de Mura in its first exhibition.