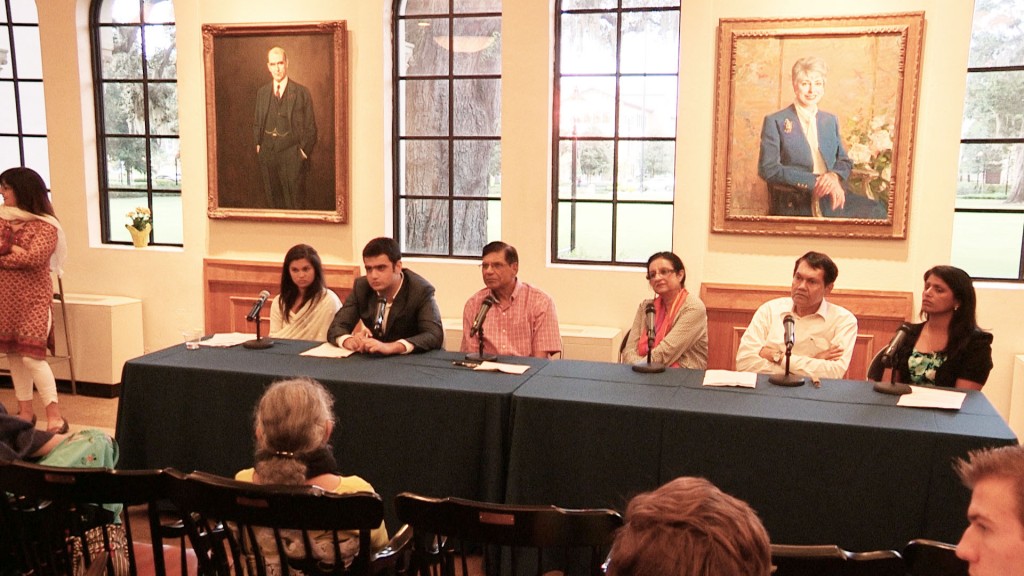 On September 18 a panel discussion organized by the  Center for India and South Asia came to Rollins and discussed the current situation in India. featuring presentations by Rollins students.

To inform the local Winter Park and Rollins academic community about prospects for India following its May national elections, Rollins College hosted a public panel discussion organized by the Center for India and South Asia (CISA) in the Galloway Room of the Mills Building on September 18.

“It was an interesting view into how the local Indian community viewed the changes within the new Indian government, and it was inspiring to see the high hopes they have for Prime Minister Modi to transform the infrastructure of the Indian economy,” said Debate Team member Caleb Archuleta ’18.

Welcoming the audience and explaining the purpose of the event, Dr. Carol Bresnahan spoke on the goal of CISA to promote the spread of knowledge of India, South Asia, and their peoples dispersed around the globe. By bringing discussion of these cultures to Rollins, CISA seeks to elevate the college as a leader in national and international educational exchange. Already, Rollins runs a dual-degree program with Jindal Global University in Delhi—allowing students to earn a degree in India and the U.S.—and sends professors to teach in India, so the organization wants to capitalize on Rollins’ actions and educate its community about India.

Dr. Yudit Greenberg then gave a brief background of the situation in India: in the recent elections, new Prime Minister Narendra Modi and his party gained an outright majority, able to pass motions as a whole without fail, in the lower house of India’s parliament. This considerable power—together with Modi’s successful political history, wide popular appeal, unique views, and the improving Indian economy—present the opportunity for India to improve itself on a domestic and global scale.

With the audience sufficiently aware of the context, the six panel speakers began the presentation segment of the evening, moderated by Dr. Smaw. Among them were Rollins students Avani Mooljee ’16 and Vanshaya Saigal ’15, former Chairman of the Board of Trustees for the Hindu Society of Central Florida Mr. Dev Sharma, Orlando attorney Rana Tiwari, Visiting Professor of Economics Dr. Somnath Sen, and the former President of the Indian American Chamber of Commerce Dr. Beena Parikh.

Each of them  presented a specific aspect of India in turn: foreign policy, economic policy, treatment of women, attitude towards globalization, and domestic policies. After their presentations, Dr. Smaw continued the discussion with the question-and-answer segment, challenging the positions set forth by the speakers; Dr. Smaw began the questioning, and then several members of the debate team, who attended the evening as a club event, asked their own questions.The formal discussion concluded with grateful applause for the speakers and continued informally over delicious Indian fare.

Listening to the speakers changed the way I thought about India, transforming it from a faraway country that had little to do with me to one with which my country may soon form powerful economic ties. It has inspired me to become more informed about events in India and global events in general. I encourage others to attend such presentations and similarly broaden their global perspective.