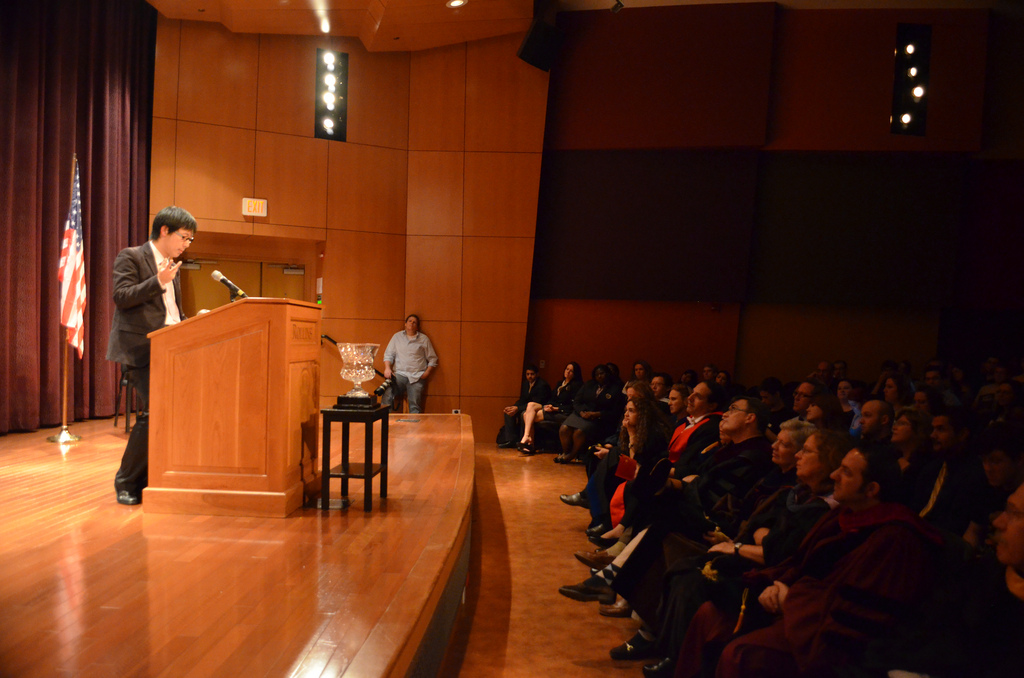 Rollins welcomes the Beijing Foreign Studies University for a debate on outsourcing US jobs to China.

It’s a sporting arena made of metallic-colored sound-proof geometrics embedding the walls and wooden floors that reflect more than just shadows, but faces. The room is a stable temperature, and the only thing heating up is the flushed tension in everyone’s cheeks that are beaming with excitement. They swarm the room, taking pictures like over eager moms at their child’s first soccer game.

One woman even dawns a large Chinese flag upon her shoulders that drapes past her legs and tickles the floor as she bounces around greeting and shaking hands with familiar faces. The stage of this sport is not a court or field, but an actual stage, intended for performance and excellence; stage right stands the Chinese flag, and stage left an equally beautiful American flag.

The Rollins College Varsity Debate Team, ranked 2nd in the nation, competed with China’s internationally ranked very own Beijing Foreign Studies University Debate Team for a game of words and wisdom in the ring of parliamentary debate. The resolution presented for the night’s debate was: “Should we continue outsourcing jobs to China?” (‘We’ being the United States and the resolution being what the argument would be focused on). The Chinese team argued for outsourcing jobs to China and the American team opposed it.

China started the debate and charismatically won a laugh from the audience with a, “Check check, does it work?” and tapping gently at the mike. The mood was set; contrary to what might be the preconceived and sitcom televised misconception of debates, this was one free of tension and held high competitive spirits throughout. The Chinese team argued for continuation of outsourcing jobs to China by stating that the principal of capitalism held a standard to continue doing this and to say no to outsourcing would be saying no to capitalism. Three benefits of the continuation were also given and are as stated: 1. The American companies can make more money and Chinese labor is cheaper allowing room for improvement and progresss, 2. There would be benefits for the poorer American citizens, and the concept of cheaper labor was brought up again with the elaboration on to more products and that being more affordable as well, and 3. China benefits with job opportunities, and an increase in their industrial market would give them more money to purchase more goods from the United States. When more goods are bought from American companies, they must be produced at a higher rate, and this then thus results in more jobs for the American people.

The opponent argued fluently and stirred positive sentiments out of the crowd, and with the mention of Obama, had the pot boiling with “Hear! Hear’s” along with low pitched “shaaaame’s”. Rollins College’s very own Melissa Fussell (captain) would humbly nod in agreement at some of the opponents points, but as her turn came around to stand at the podium she equally argued her point well but audibly won the audience over more with her stylistic personal way of arguing.

Fussell opened up with the well-remembered anecdote of the Mattel incident and lead paint on toys imported from China. She used this as a starting basis to elaborate on historical evidence that showed possibilities of future consequences if the U.S. was to continue outsourcing jobs to China. She continued with the explanation of how the maintenance of outsourcing jobs to China would be detrimental to the U.S. and China both. Focus was brought back to the government, corporation, and individual with the roles they each hold and how they are affected. Benefits invested in corporations would bolster China, but not the U.S.

Before confidently striding back to her seat on stage Fussell proudly spewed, “Thank you, and God Bless America!” from her lips like a running faucet, sending the American sentiment of pride out like a wave, drowning the audience with an acceptance and admiration for the opposition.
Rollins’ own Chang Zhao ’15 argued on the side of China as a Chinese student and gained a positive response from the audience as well. The audience laughed when she stated that many of America’s items came from China. However, Zhao was bombarded with a large unison ‘shaaaaame’ when ending her argument with “I’m not going to say, ‘God Bless America’. China does not believe in God, sorry to insult.” All of it was done in a harmless fun debate; from the rejections of Fussell’s many attempted interjections during Zhao’s speech, all the way to the end, when Rollins’ Chassidy Cook came to the podium with the analysis and philosophical grounding to further elaborate and reiterate the points of the opposition.
Fortunately, the glass goblet shall maintain its place here at Rollins College, as the Rollins Varsity Debate Team, debated by Chassidy Cook and Melissa Fussell, won after awaiting a verdict from the hushed huddle of deliberation in the front row seating the judges. This debate was just the kickoff to a week of eight debates to follow with BFSU, and a well-watched intellectual activity it was.

All photos by Hongjin Du.