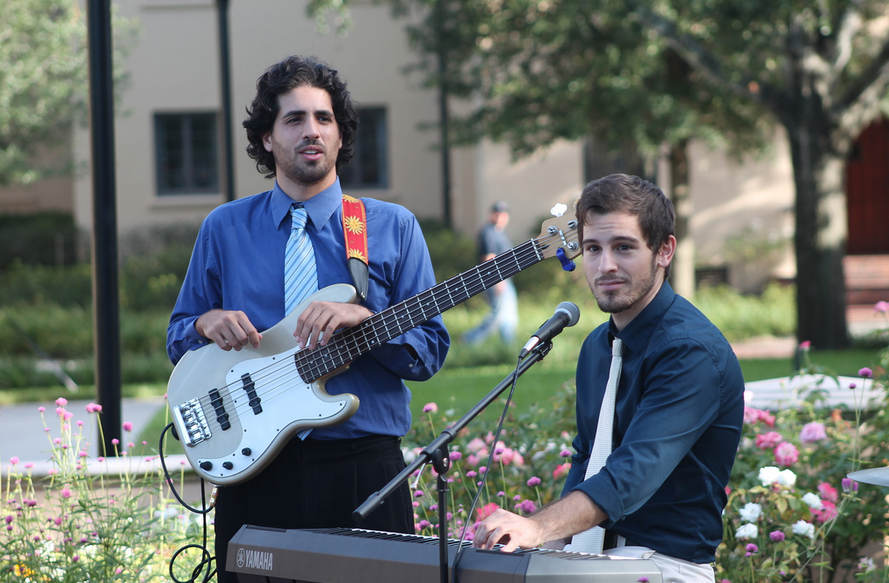 It was electrifying and static. The crowd was dynamic and robust with excitement. Matildas, although a small hole-in-the-wall joint, with the first floor rustling with the sound of televised football games and laughter, never seemed so alive.

Brett Miller and the Brett Miller Band (BMB) were upstairs rocking three insane live sets of originals and covers on the night of their album release party and show. Live music, drink specials, good people, and no cover—could the night get any better? It was time for the BMB breakthrough.

The Brett Miller Band debuted their nine-track album for release for sale that night. Front man Brett Miller (lead vocalist/pianist/percussionist/songwriter) is a senior at Rollins College, joined by immensely talented Kenny Hargett and Daniel Bey on varying saxophones, the gifted Nasrulah “Nas” Rahbari on electric bass, and rhythm rattling Nick Law on drums—all current Holt Rollins students. On this night though, it was Andrew Lesmes ’14 who filled in on the drums, slaying and laying down beats naturally.

When I got the chance to sit down and speak with the members of BMB I became more knowledgeable of the unspoken alchemy that stirs their excellence and success.

For starters, BMB prides themselves on their visible diversity: three of the members being African-American, the front man Jewish, and the bass player Iranian. With diversity like this, they commented that a certain sound and genre are often innately expected of them. However, they refuse to be pigeon-holed to a particular style. The varying backgrounds have contributed to their exclusive sound, but alongside this, the musicians combined hold over a decade of experience in performance both locally and nationally with other groups and bands. Miller is in fact the youngest of the group at 21, but he wanted to surround himself with older musicians who’ve obtained experience and musical knowledge.

BMB originally started off as a project for a songwriting class and was intended for recording before escalating to the CD debuting greatness that we have before us presently. A great deal of the songs actually originate from that class. Currently, Miller is the sole writer of BMB but with the accumulated experience and knowledge of the other members, they are given the autonomy to utilize their voice and contribute to strengthening their overall sound. Originally the initial band had very different members, and it wasn’t until a little after their first concert with the previous team that there was a shift and expansion of the band. As a unit, they are barely a year old, having become active this year with the album release, according to Miller. The harmony amongst the members is evident with positivity, reflective of the joyous vibes they share day to day as friends, brothers (Phi Mu Alpha Sigma Eta Men’s Music Fraternity), and musical colleagues.

Their heterogeneous genius stems from their instrumentation. BMB places leads on Hargett with alto sax and has no guitar despite suggestions of adding one. The solos that the sax jam out to are very similar to that which a guitar would play. Miller describes their sound as a jazzy pop rock, although hesitant to single themselves to one set classification. Every song is a genre of their own—Miller admits that when he writes, “the feelings don’t have a genre.” Miller took what was once a solo endeavor  to a larger scale band setting. Miller admires their distinctiveness, hoping that it will flourish, pleasantly surprised by their own success. “We’re playing with fire—I know that, and I know they know that. I have a lot of faith that we’re good enough to make something big out of this, whether it stays in Orlando or even if the final result is we’re a working, gigging band every week. I like that I’m fine with that, I don’t know if that’s the most attractive idea (being “famous”) or have my name to become some trademark and my privacy just gone. There’s a lot to value in just your everyday life. If the best case scenario for our band is gigging every week consistently I’m cool with that. That’s the goal, sustain a life doing what I love but still having my life, that’s what I want to do.”

The album is available online at iTunes, Spotify and Pandora; the success of BMB truly is a breakthrough for our local community. That night a Maltidas was a magical one as people just let their body take control and feet guide them.

BMB thanks everyone who came out that night and everyone who continually supports  the group. Most importantly, they would like to thank Professor Daniel Flick, who helped engineer and produce the album (even playing viola on one of the tracks), as well as for his hospitality, patience, and continued support as a great guide and teacher.