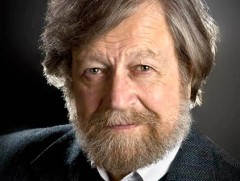 When most people think of composers, they usually think of deceased Western European men such as W.A. Mozart, J.S. Bach, and L.V. Beethoven. However, this week Dr. Morten Lauridsen, a national Medal of Arts recipient, and one of the most celebrated American choral composers of our time, thrilled audiences in Winter Park with his compositions. The Orlando Sentinel’s Matthew Palm stated in his review of last Sunday’s concert that the Rollins College Choir’s “crisp dynamics elevated the piece’s emotion, as the choir swelled joyously, an angelic tenor line peeped through, and then the sound lowered to the ‘Alleluia’ ending,” in reference to the “O Magnum Mysterium,” which opened the concert.

This week he shared his expertise with aspiring composition students and music faculty alike. Tuesday, January 28 was our opportunity to gain a clearer understanding of the man behind the music. Dr. Lauridsen’s Shining Night documentary aired in the Bush Auditorium. Preceding the screening, Dr. John Sinclair, head of the Music Department and conductor of the Bach Festival Choir and Rollins College Choir, made the introduction for Dr. Lauridsen. The documentary did a superb job of giving audiences and musicians a look into a brilliant and talented mind, captivating our attention from the moment the film began. Dr. Lauridsen shares his journey from a kid working a summer job to his musical awakening which led him down the path toward composition and a life in music.

During his visit, Dr. Lauridsen attended one of the songwriting classes in Keene Hall, during which he shared many personal stories about his college days and his very amusing story of how the “Mom, I want to major in music” conversation – a conversation many students fear having with their families for fear of judgment – went. The film was a look at how many of his beloved choral compositions were created.

Dr. Lauridsen divides his time between the University of Southern California, where he’s been teaching for approximately forty years and where he was a student himself, and his composer’s hideaway in Waldron Island. Dr. Lauridsen described his love for this glorious island retreat, as it provides the peace and quiet crucial to his compositional methods. Dr. Lauridsen spent six months on “O Magnum Mysterium” before it was ready for publication. It is to date his highest selling choral work and is widely performed across America and throughout the world.

Overall, I’d say this visit was enlightening for audiences, music faculty and students alike. It was a learning experience for many of us who took part in that concert, and certainly an experience which will not be forgotten.