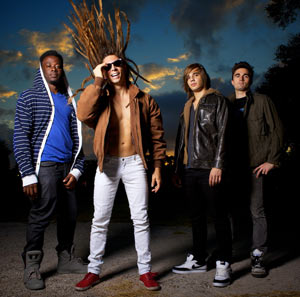 The Crazy Carls are a local band based in Orlando made up of four members: Nick Lucera on the bass, Don Joseph holds down the drum portion of the band, Matt Bernard plays keyboards like a boss, and last but not least Alex Baugh doubles as lead guitarist and lead singer. Though the stage presence was mostly embodied by the front man, each member of the band contributed considerable talent and skill to the band’s sound. They worked well together, and their onstage chemistry was palpable.

The Crazy Carls had their album release party on Oct. 24 at Backbooth. This was my first foray there over the age of 21 and I was disappointed to find that their drinks were not only overpriced, but extremely watered-down. Even if you’re a lightweight, you could have several drinks and still successfully walk in a straight line (Unless you can’t do that sober either).

The Crazy Carls new album, Owl Tattoo and is currently up for grabs on iTunes as well, for the very reasonable price of $7.92. This was my first Crazy Carls affair, but I have it on good authority from a dedicated fan that the band’s sound has evolved quite a bit over time. They started off as reggae influenced pop rock, followed by funk and landed at a happy medium between the two.

About half way through their set, the band threw out several beach balls and pool floaties to the audience, bringing even more energy to the space. In addition to their own original songs, The Crazy Carls played a few covers of currently popular songs and managed to make each their own. Covers included songs by artists such as Wiz Khalifa, Daft Punk, and Drake.

If I were a betting man, or more accurately, a betting woman, I would say the front man of the band, Alex Baugh, must be a Prince fan. His adoration of Prince was conspicuous throughout his show, partly due to the wardrobe choice of faux snake skin pants; any shadow of a doubt disappeared when Baugh shredded his guitar with his teeth. Further research on the band’s website thecrazycarlsmusic.com confirmed the lead singer’s love for Prince.

Heavily influenced by Prince or not, The Crazy Carls delivered a genuinely unique show. There was no shortage of females at the show, so if you’re on the prowl for good music and foxy ladies, check out a Crazy Carls concert. Unfortunately for the Orlando audience, The Crazy Carls have a tendency to play in southern locations outside of central Florida. However, do not be discouraged dear reader; you can always follow them on Facebook for details on upcoming shows and more. If you would like to hear and see them right now, you can check out their Youtube page. Happy listening.