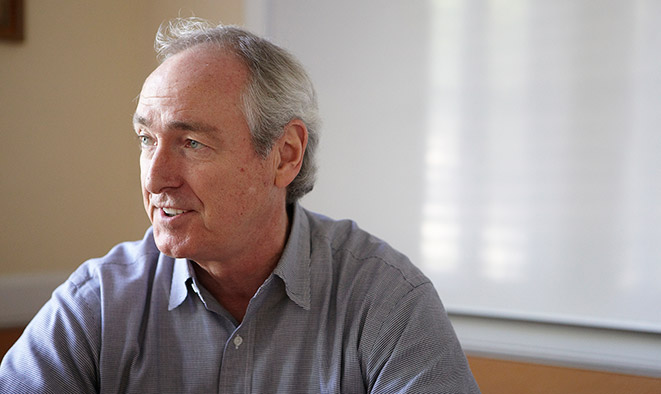 Deaver featured at Winter With the Writers 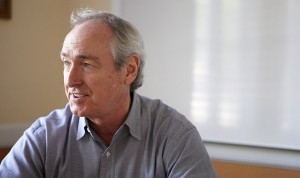 The second installment of this Winter with the Writers season was widely attended and served as a celebration of Rollins professor and writer-in-residence Philip F. Deaver’s new work, Forty Martyrs.

I had the rare opportunity to not only sit next to Deaver for his autograph signing, but also to watch as the immense crowd that nearly filled Bush to capacity slowly dwindled, leaving an empty and eerily quiet space behind.

It was a stark contrast to the sweet sounds of laughter and applause that filled the room earlier in the evening, following readings from Forty Martyrs given by Deaver’s colleagues and friends: English Professor Dr. Jill Jones; Ryan Favata, one of Deaver’s former students and van den Berg Scholarship winner; award-winning poet and author Brian Turner; and Ryan Rivas, founder of Orlando-based publishing company Burrow Press and a long-time admirer of Deaver’s work.

As he signed perhaps the thirtieth copy of Forty Martyrs that evening, Deaver flexed his hand and said with a quiet laugh, “My wrist is giving out.”

And not only that, his pen had called it quits, too. Panic, of course, set in, but thankfully it did not last. Pens were passed, and the signatures continued.

Those still waiting in line—nearly all of them fans, colleagues, and former students—were very patient and sweet, and did as instructed, keeping their words of congratulations short, but remaining genuine in their praise.

Though my task as Deaver’s intern for the evening involved getting everyone’s names, spelling them correctly, and passing them along with each new copy that slid across the table, he really did not need me there. To my surprise, he knew almost everyone in the line by name.

If that does not tell you how much of an impact Deaver has made on this community, then maybe this will: in just under an hour, he signed over 70 copies of his novels, and not just the copies of Forty Martyrs that were available for sale in the Bush lobby.

The book’s predecessor, Silent Retreats, was the crowd’s next favorite choice (it won Deaver the Flannery O’Connor Award for Short Fiction in 1986). His other books, including his collection of poems, How Men Pray, and The Rollins Book of Verse, which features his poem “Classic Projection VI: Robins Above,” also popped up throughout the night until finally—sadly—the last book was signed.

The pen he borrowed from me was finally clicked closed, and Deaver was whisked away to his next gathering where he could rest his aching wrist.

The reading in Bush was not the only highlight of the evening. Earlier that day at 4 p.m., Deaver attended a Master Class in the SunTrust Auditorium, given by his good friend, Brian Turner.

Topics varied from poetry to short fiction, and involved some very hands-on exercises, including 2-minute writing prompts that those in the audience were encouraged to participate in, and a human sculpture demonstration that moved bodies and chairs to help convey a sense of scene.

While Deaver’s stories take place in Tuscola, Illinois, a town far, far away from Winter Park, there is something about them that is masterfully binding and universal. Whether you are from a small town or not, Forty Martyrs will convey to you the struggles of life in a beautiful, haunting way that changes you forever.

Standing alone in Bush afterwards, taking time to collect my things, was of course a bittersweet moment. The buzz of excitement had faded. Another week of Winter with the Writers was gone in an instant.

Those brief moments will still linger, like everything that Deaver does, ghosting around in my brain every time I think of the books he signed or the pen of mine he used.

It was a wonderful, once in a lifetime experience, and I cannot wait for next week, when Chase Twichell, the Irving Bacheller Chair in Creative Writing and author of seven novels, including her poetry collection Horses Where the Answers Should Have Been, will be joining us.