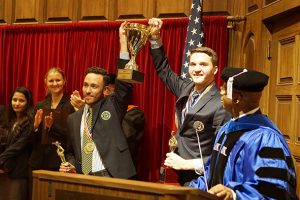 The debate team knew that, with election day growing closer and the highly contested campaigns for the presidency nearing the ends of their sixteen-month-long journies, it would be difficult to avoid the overpowering dialogue about the presidential election.  However, to close out the first day of Rollins Family Weekend, on November 4, the world-renowned Rollins College Debate Team brought us a version of the presidential debate so sophisticated that we might have expected it from the candidates themselves had we not known better. Representing Side Government, or Trump, were Dianna Loew ’18 and Katherine Rizzo ‘17; Kolten Ellis ‘17 and Joshua Brown ‘18 represented Clinton as Side Opposition.

There was powerful dialogue on both sides, and one wonders what the presidential debates might have been like if the candidates themselves were this aware of and fluent on the issues.  However, the highlight of the evening was Side Government’s ability to make even a candidate like Trump seem like a legitimate contestant in the presidential race by demonstrating clear stances on the issues in question.  The chamber was filled with “Hear, Hear” and “Shame, Shame” in support or disdain for the views of both candidates, though there did seem to be a bias for Clinton within the group.

The main issues discussed during the debate included US foreign policy, the Supreme Court’s ability to interpret the Constitution, and education.  Side Government’s main points were that a literal interpretation of the Constitution should be required of Supreme Court Justices with a “messiah complex,” that the Department of Education needs to be abolished in favor of a competitive business model for education, and that, realistically, we should not continue taking soft stances on hard problems.  Loew ’18 claimed, “Trump will not make popular decisions, but will make decisions that keep you and your family safe. . . We need to be realistic about the situation we are in.”

“The only question we should be asking ourselves on the Eighth,” continued Loew ‘18, “is whether your Make America Great Again hat will be red, white, or blue.”

The debate closed with some questions from the audience, with debaters expressing their views regarding their vocations as both students and debaters.

In response to his views regarding the debate, Brown ‘18 echoed American sentiments, “if we don’t have [rhetoric skills] at the foremost, most elite level of policy-making and decision-making in our country, then what are we doing?  What do we need to ask of ourselves in terms of fulfilling our duties as educated citizens?”

Loew ‘18 stated, “the basis of the [debating] discipline is to take two arguments and equally skilled rhetors and be able to find the truth from that.”

And while Side Opposition, representing Clinton, won last night’s debate, it won’t be until November 8 that we get to see who will win the only race that matters.  The stars of the night, however, were definitely the debaters and their ability to represent the best that a liberal education has to offer.  Just last week, for instance, the Rollins Debate Team won first place in the Southeast Regional Ethics Bowl 2016 competition.