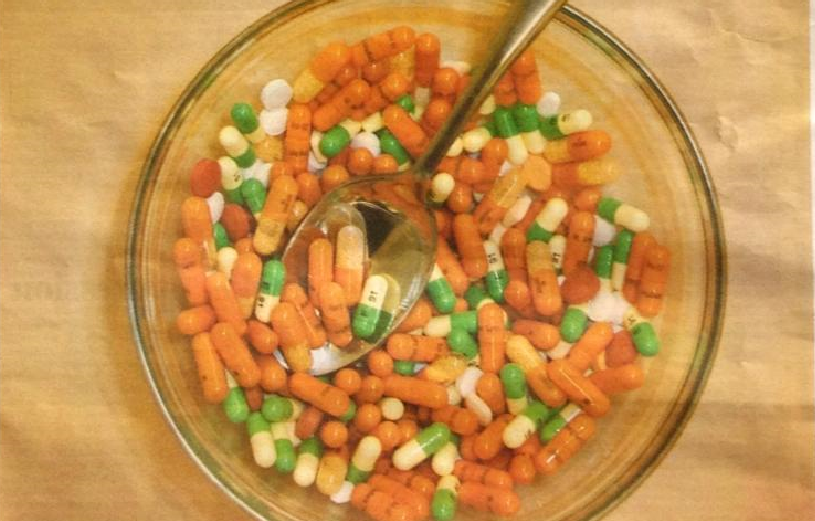 [information]Ben follows up on his last story where he described his struggle with adderall addiction.[/information]

“Man, I don’t even bother punching those fuckers, man. I fuckin’ curb-stomp them. Ain’t nothin’ hits harder than the cement. Ain’t nothin’.”

Kendall’s words, not mine. Kendall is in here with me—a pale, slouching, amorphous blob of a kid with yellow, plaque-fuzzed teeth that look as if they simply won’t work as a team, but instead choose to jut out at weird, disparate angles. Teeth I’ve seen a lot of since my arrival here a couple weeks ago, since Kendall breathes only through his mouth. There are a lot of ‘only’s’ with this guy: He wears only one outfit, a livid purple sweat suit; I’ve taken to mentally rechristened him Barney because of this. He refers to others only as ‘motherfucka’ and ‘nigga,’ the latter despite being resoundingly and in all ways white. He’s conversant in only one subject: his career selling crack on the mean streets of ‘Bula (Ashtabula, Ohio.) Nobody in here’s sure if Kendall actually used to deal, or if he’s making all this up as he goes along. We all humor him, though. It’s not that we like the guy—quite the opposite: we just aren’t up to calling him on his shit. A kind of lassitude sets in after a few days here, a passivity unique the damned once they’ve resigned themselves to their damnation. We’re tired.

Or I am, anyway, which explains the conversation I’m now having with Kendall:

“So you’re saying when someone doesn’t pay you for their crack, you curb-stomp them?”

“Damn straight.” Kendall leans on the back two legs of his chair, grinning a furry-toothed grin of self-satisfaction.

“Isn’t that a bit gruesome, Kendall?”

“That I do, amigo. I certainly do know how it is. On the streets and whatnot.” I pause. “But can’t you kill people that way? Curb-stomping?”

“I ain’t sayin’ nothin’ about that. I done what I gotta.”

I nod, because that’s really all there is to do when a person makes oblique—and patently false—references to his past murders. “It’s presently unclear to me, Kendall, whether you’re trying to keep me from buying crack from you in the future, or simply telling me the penalties for non-payment if I were to buy crack from you.”

Kendall smiles blankly at me. “Yep,” he says.

And that’s how I spend my time in here.

‘Here:’ the Cleveland Clinic’s Glenbeigh Hospital, a rehab facility in the northeastern corner of Ohio. I was admitted on January 27. That was two weeks ago.

The trip was, in many ways, a long time coming—ample evidence speaks to this. The last article I published in this paper, for example: an investigative report of Adderall use among college students which unraveled about 450 words in, when I admitted to using up to 200 mg of the stuff daily. Combine that with the fifth-or-so of bourbon (also daily) I washed the pills down with, and it all starts making sense. It makes sense I failed every class in which I was enrolled last semester. It makes sense Rollins suspended me for this. And it makes sense for me to write about my suspension in the Sandspur: I was, after all, writing for this paper continuously while I ingested the drugs that contributed to my suspension. So now, I figure, I’ll be your correspondent on the outside; I figure I’ll report on the break Rollins—quite understandably—decided it needed from me. I figure I’ll send in semi-regular dispatches from suspension. This is the first.

I’m pretty sure this isn’t what I need. Rehab. I don’t go around saying as much—common knowledge around here: no better way to stick around than by telling people you want to leave—but I say it to myself. I shouldn’t be here. I don’t want to be here. I want to go home. I say it a lot.

Because heroin, for one thing: everyone here’s on heroin, or used to be. There’s plenty to be read online about America’s Heroin Epidemic. Plenty of stories, with photos of kids with empty eyes and bad skin, hard-angled faces inscrutable and cipher-like. Yeah—but to sit next to those ciphers and eat your institutional meals, your stringy pot roast and waterlogged cauliflower—to see firsthand the drug’s pull in the upper Midwest: that’s something else entirely. It makes your substance issues seem tame and trivial, and eminently manageable. Which is a problem, when the program through which you’re to deal with your drug problem (a slightly-modified Twelve-Step program,) is predicated on admission of your addiction’s unmanageability .

My counselor tells me that a few days into treatment—a round, cherubic, Mrs. Klaus-type woman named Vanessa. Vanessa apparently once had a Dexedrine addiction that was just harrowing in its indurate tenacity, but looking at her now, it’s hard to image her addicted to anything much harder than scrapbooking.

“Did you feel you had control over your addiction?” she asks me. We’re in her office, and I’m trying to figure out why she has a Christmas sweater on in late January.

“Well, yeah,” I say. “I felt I did. Once. But then I got suspended from college, and now I’m sitting in your office, in a rehab facility outside Ashtabula. So I’m kind of thinking maybe I didn’t.”

They’ve got a sauna here, and Kendall and I are sitting in it. It’s what I do when I’m overwhelmed, which is most of the time at Glenbeigh: when the only coherent thought in my head is, What the fuck am I doing in rehab, when I’m too baffled by everything that landed me in here to feel anything but a baseless, nebulous kind of anger. I sit in the sauna until I’m lightheaded, and everything starts to look luminescent. Vaguely irradiated. Until everything is fuzzy and glowing, and it looks as if I could be anywhere—until I can forget, for a minute, myself and my situation. Until I can forget this place. It’s probably not healthy, but then again, I’m in rehab: ‘it’s unhealthy’ has never stopped me before.

I’ll spare you a description of shirtless Kendall except to say, looking at him, I’m for some reason reminded of Picasso’s “Guernica.”
“So what you in here for, man?” he asks me.

Kendall laughs. In doing so, he showers me with a fine mist of what’s either sweat or saliva. I’m too hot to care—honestly, it feels kind of nice. “Man, that’s some fuckin’ pussy shit, man. No meth or nothin’?”

“So the court made you come here?” A solid half of all visits to Glenbeigh are court-ordered, the result of kids choosing between rehab and a few months in prison. That’s how Kendall came to be here: he was caught trying to steal a length of chain from a playground swing set. Yeah—I don’t know, either.

“Nope.” I’m looking at Kendall, and I notice everything’s in softer focus than it usually is after an hour in the sauna. I feel like I’m in an aquarium.
“Then what the fuck happened?”

What the fuck indeed. What the fuck am I doing in rehab, with guys like Kendall? Really, what the fuck? I don’t belong here. I am not the type of person to go to rehab. I don’t take hacksaws to playgrounds and go to work on the tire swing. Vanessa wants to know why I’m acting like my addiction’s manageable, and this is why. Because I feel my addiction is different. I feel I’m different. These kids can’t manage, but me, I can. I’m not them.

Everything looks brighter than normal, too.

“I got suspended from college, Kendall,” I say. Everything’s getting brighter still. The sauna’s rocks, the wood benches, the glimmering, sallow skin of Kendall’s chest and the livid, red pimples on it. Everything seems to be its own source of light. “I got suspended and now I’m here.”

“Shit, son.” He laughs some more. He gets brighter. “That’s it?” And brighter.

Then, nothing’s bright at all.

I’m in a hospital bed with an IV in my arm.

“You passed out in the sauna,” a nurse says to me. “You’re in the detox unit. You’ll stay here until you get rehydrated. You just rest up for now.”
“Mhm,” I say. The nurse walks out, and I’m left alone in the room. I don’t want to be there—I know that much; since my arrival at Glenbeigh, I’ve never wanted to be in rehab at all. But now, I also know exactly where I want to be, which is a first: I’ve never been able to clearly articulate that in here. I want to be back at school. I want to be in The Sandspur’s office at 11:00 p.m. on a Wednesday night, working feverishly to throw a newspaper together, bitching about not being at Fid’s. I miss that, and thinking about how I miss it, the sense of loss I feel is more acute and more pure than anything I’ve recently experienced. The clarity of the emotion is disarming: for the better part of a year, nothing’s been clear to me. Now this.

It’s clear to me, too, that my addiction’s responsible for this sense of loss I’m feeling. No, I’m not Kendall. No, my circumstances aren’t similar to those of many of Glenbeigh’s patients. No, I don’t want to be here, but I’m realizing I probably need to be. I’m not at peace with it, and I’m not happy. But I’m not angry anymore, either.

I will leave here soon. I will go to Alcoholics Anonymous meetings daily, sometimes more. I will sit under fluorescent lights and drink bad coffee, and I will listen to a great deal of people talk about gratitude. Gratitude is a big part of AA, and a favorite discussion topic of its adherents. Gratitude to the program, to friends and family members, to God—to God most of all; AA is a spiritual program before it’s anything else. I will hear much talk of gratitude, and I’ll often try to feel some myself, though it won’t come easily. Because I won’t like AA—won’t like the coffee, the lights, the clammy, feel-good spirituality, or the program’s tacit hostility toward the intellect. Some people love the program, but I will not. Here’s what I will do, though:

I will, a few weeks out of Glenbeigh, reread the piece on Adderall I wrote in this paper. And I’ll be reminded, then, of the haze of hopelessness and self-pity and—most of all—fear that clouded my mind as I typed it up. Even then, I won’t feel gratitude. But I will feel ready to continue the hard work required to ensure I never feel that way again. And I’ll feel hopeful that maybe, with enough of that hard work, years from now, I will feel gratitude—to the program, to Glenbeigh, even to Rollins for suspending me. For now, I think that’s enough.

Read the continuation of Ben’s story.