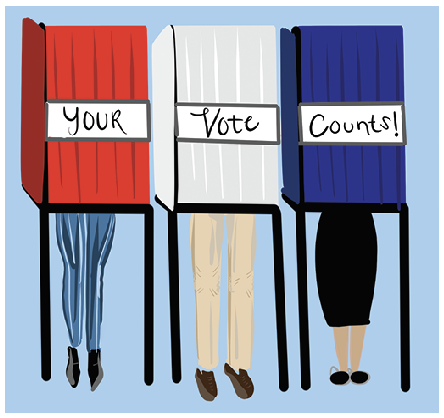 Driving students to the polls

The Democracy Project at Rollins has registered over 250 students this semester.  Through voting simulations, tabling events, and attending classes, this non-partisan political organization is gearing up for the upcoming midterm elections.

They hope to reach their goal of having 50 percent of the student body make it to the polls on or before election day on Nov. 6, which is over 30 percent higher than the national college student turnout in the 2014 midterms. In 2014, the rate was only 18 percent.

There are two main barriers that stand in the way of student voting. The first is “educating students on the compelling reasons why it is so important they vote in the first place,” said Dr. MacKenzie Moon Ryan, assistant professor of Art History. The second barrier is getting students to physically show up at the polls or send in their absentee ballots.

Everything you need to know about amendments

Check out what you need to know before you vote.

According to Frances Asbury (‘19), a coordinator from the Democracy Project, they will be tackling that first barrier by “hosting early voting drives from Oct. 22 to Nov. 4 to get students to the polls before Election Day.”

The Democracy Project wants to inform students on the candidates and their platforms. Asbury said that “when students realize that the policies that politicians implement actually affect us, and that we can have a say in those policies, students do go out to vote.”

Earlier this month, they held a voting simulation where students could practice filling out a ballot and learn about the various candidates and their positions. Approximately 70 first-year students engaged in the simulation, according to Ryan.

The League of Women Voters, a historic civic organization, was in attendance helping students register and explaining the 12 amendments on the ballot.

The Democracy Project’s efforts will not cease on Election Day, when they will be running buses to and from the polls every hour on the hour. After voting is over, they, in conjunction with Rollins Entertainment Programs, will host an Election Watch Party in Dave’s Boathouse.

All year long, the Democracy Project is educating and empowering students on the political climate and the responsibility of making a difference by using their voice. Voting is just one of the ways that students can express their opinion. The Project is providing, “the tools for students to educate themselves and promote the election, so that students know that this is their chance to make their voice heard,” said Asbury.

Getting greek life to vote

The Office of Fraternity and Sorority Life (FSL) at Rollins has also joined the voting bandwagon and partnered with the Democracy Project to promote the engagement of its members in civics by hosting a friendly voter registration competition.

Since Delta Zeta won, they were awarded $250 to their chapter account. Since a chapter typically spends $200 for their philanthropy event, an additional $250 will increase the profits they raise for the Starkey Hearing Foundation, their national philanthropy organization that provides hearing aids for people in need.

The competition was scored in terms of points, and chapter members could either register on site at Rollins with the Democracy Project or prove their previous registration status. However, small chapters were not put at a disadvantage, as each chapter was allowed to bring non-chapter members with them to register.

According to Juan Franco, the FSL Graduate Assistant and FSL Hall Director, “at least ten members were registered per chapter,” and the promotion of civic duty will not stop there.

On Election Day, which is Nov. 6, FSL will again partner with the Democracy Project to host a competition to see which chapter has the highest voter turnout. Competition and democracy do not just thrive in Washington D.C., but in Rollins’ own community, too.