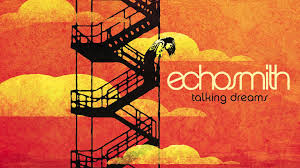 In 2012, the four Sierota siblings – Jamie, Noah, Sydney, and Graham – signed with Warner Bros under the name Echosmith. Since then, they’ve played a variety of notable gigs, including a promo for the 2012 Summer Olympics, and opened for acts such as Owl City. Taking inspiration from Coldplay, U2, and The Smiths, Echosmith offers a definite alternative-pop sound. Their first album, Talking Dreams, was released on October 1st of this year.

Talking Dreams is energetic and clean in its production, and the band has found a strong identity in their teenage-rebel lyrics and excitable harmonies. Most tracks sound like a fun day at the beach with friends, and the occasional halftime segments are a relaxing break from pretty consistently similar tempos. I would go as far as to say that Talking Dreams reminds me a lot of Hey Ocean!’s Is in its sweetheart teenage-fantasy sound.

The only gripe I have with Talking Dreams is that some tracks feel a little too long at times – especially when there isn’t a very catchy chorus. But then again, four minute tunes would be pushing it for any pop group, so in that respect Echosmith isn’t doing a bad job at all. And tracks such as “Bright” come at just the right time to catch a listener’s attention again.

It surprises me that Echosmith hasn’t released a full album until now. Their sound is highly accessible, and definitely worth a listen. Talking Dreams is a solid album with definite identity, and one I’ll be adding to my personal library.