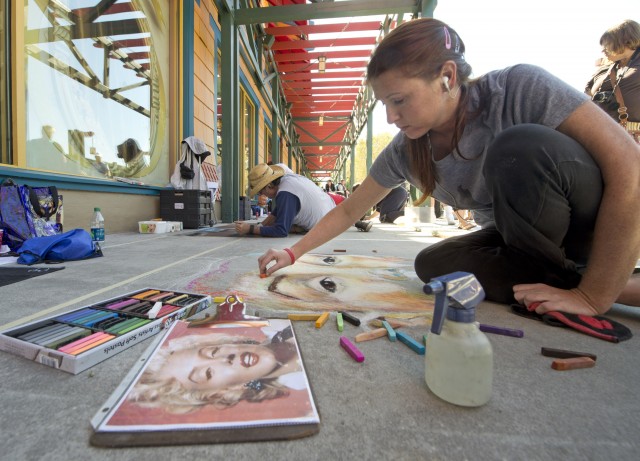 If you’ve ever been down to Downtown Disney and have longed to come back, then when Disney hosts the Annual Festival of the Masters, you will beg to go back! Downtown Disney during the festival transforms into a veritable explosion of talent and color with an open air market featuring over 130 artists from many different backgrounds and styles! Recognizable at a distance with multitudes of white tents, the market space will beckon to you to enter and traverse through the many booths disclosing all kinds of original art. Indeed, the Masters beckoned thousands and thousands of people in its space. All around Lake Buena Vista, near the Westside, the Marketplace, the Artist Village, the Waterside Stage, artists awaited with a smile as the many people that arrived to feast their eyes on this giant palette of color. From sculptors, to woodcrafters, to painters ranging from modernism to impressionism, drawers ranging from charcoal to ink media, jewelers, crafters, and chalk artists, there was enough diversity of art to satisfy even the most philistine of people. Many artists from all over the country found their efforts and talent rewarded with prizes of Best of Show, first place, second place, third place and honorable distinction. There were also crafts available for the children and artists (such as the chalk artists) who showed off their talent live. In the chalk artist group one could see various illustrations of, for example, Charlie Chaplin, a Buddha, medieval knights, cougars, or egrets, all ready to pop out at you from the sidewalk.

To cap off an extraordinary event, in the afternoon, the Cirque du Soleil – La Nouba hosted a plein-air small performance with its talented clowns and acrobats, drawing out howls and giggles from the children and adults alike, in a cute little pantomime involving people from the audience as well. Once again, another astounding Festival of the Masters, masters of their art indeed, unfolded here in Downtown Disney. We wait with anticipation for next year’s explosion of talent and having the joy of recognizing established artists and discovering new fresh talent.