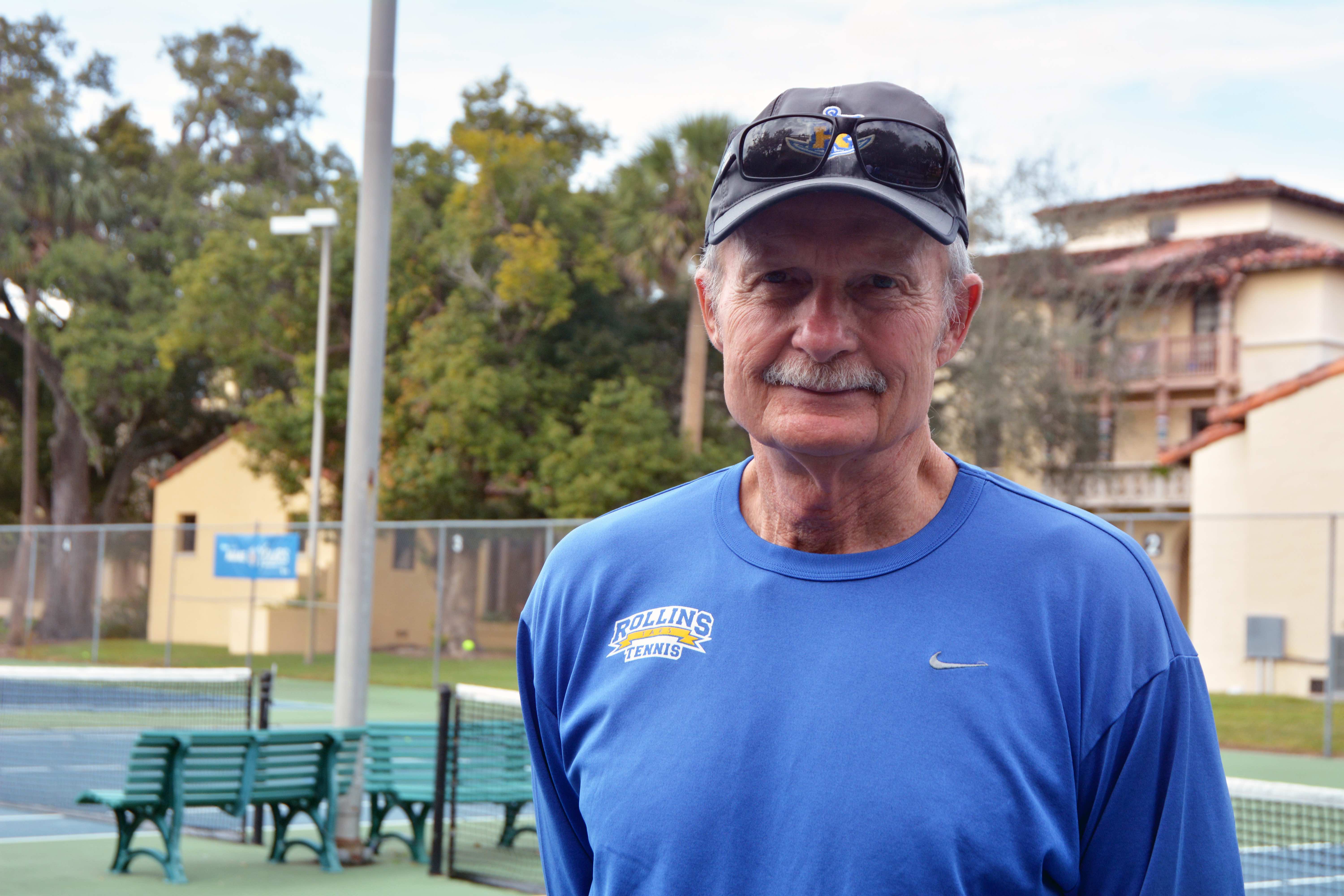 After 18 years at the helm, Men’s Tennis Head Coach Ron Bohrnstedt is stepping down, leaving the team in the hands of interim coaches Nico de Fraya (‘19) and Rollins Hall-of-Famer Anzela Zguna (‘02).

Bohrnstedt’s retirement marks only the third transition of coaches in the history of the program.

“I am 72 years old now. It’s time; I’m ready,” Bohrnstedt said. Getting more time with family was a large reason for his decision.

“My dad just turned 97; I got to go to California to see him more often. My grandkids are getting older and they’re still up and down the East Coast,” he said.

Originally from Redlands, Calif., Bohrnstedt is looking forward to traveling and doing things he was unable to do due to his dedication to the team. The decision was made easier by the knowledge that he was leaving the program in good shape and safe hands.

Team Captain Guy Feigin (‘20) said the Tars were surprised by the news, especially because their main season is starting next week.

“We are a bit sad that he is retiring because he is a great coach and an even better person, but we are happy for him and fully support his decision,” Feigin said. “He left a legacy that he can be proud of, and we will continue his work even if he’s not around,” said Feigin.

Bohrnstedt revealed that he had considered retiring last season but chose to stay one more semester in order to support the incoming players.

“I thought to myself, ‘We have new players coming in and I have to get them used to the Rollins culture, our sportsmanship, the way we act on the court, the way we treat officials—the whole nine yards.’”

Had he retired in the summer, Bohrnstedt would have enjoyed a perfect closing season.

The team made it to the National Collegiate Athletic Association (NCAA) Finals for the 53rd time in 66 seasons, having placed third in the Sunshine State Conference (SSC) and sitting at No. 11 in the final Intercollegiate Tennis Association rankings.

Last season was a testament to the strength of both Men’s Tennis and Bohrnstedt: “The year before, we didn’t do particularly well, but last year we turned it around with basically the same team, the same guys. They just put the foot on the gas and took off. For that, they will always hold a special place in my heart,” he said.

Bohrnstedt also complimented the generations of players that he worked with throughout his time at Rollins.The Tars were nationally ranked throughout his entire tenure, with 13 players recording a total of 25 All-American seasons, including four SSC Player of the Year awards: Nicolo De Fraia (‘19), Lucas Jovita (‘12), Jeff Morris (‘10), and Carlos Custodio (‘04).

When making predictions for the current season, Bohrnstedt spoke with care: “At this point, it’s hard to tell, because we haven’t played any matches. We have a young team, with some experienced players graduating last year. We still have a group of great players, but I think they still need to build college-level experience.”

Another trend that Bohrnstedt noticed was how NCAA tennis, and the SSC in particular, have become increasingly international throughout the years. While he considered the development a positive one, he also noted how difficult it has become to recruit skilled domestic players.

“We have gone in that [international] direction too,” Bohrnstedt said. “Last year, our team was about 50:50 between American and international players.”

Bohrnstedt highlighted the Athletic Department’s cooperation with the Office of International Admissions in recruiting and assessing student-athletes.

He also said how pleasant it was to work with the department’s staff, who he dubbed both “great coaches and great people.”

Feigin remembered that it took him a bit of adjustment before the results came in: “Ron was unlike previous coaches that I had before,” Feigin said. “He gave players a lot of freedom in practice and off the court, but when it came to game time his knowledge of the game was extremely valuable and helped both me and the team win important matches.”

For Feigin, one of the greatest lessons he received from Bohrnstedt was learning how to be patient and analytical. Bohrnstedt always emphasized that success is a process that must be achieved by working hard and making good decisions.

Bohrnstedt expressed full confidence in the abilities of the interim head coaches and in the department to hire a suitable, permanent replacement. Yet, he misses working with Rollins athletes already.